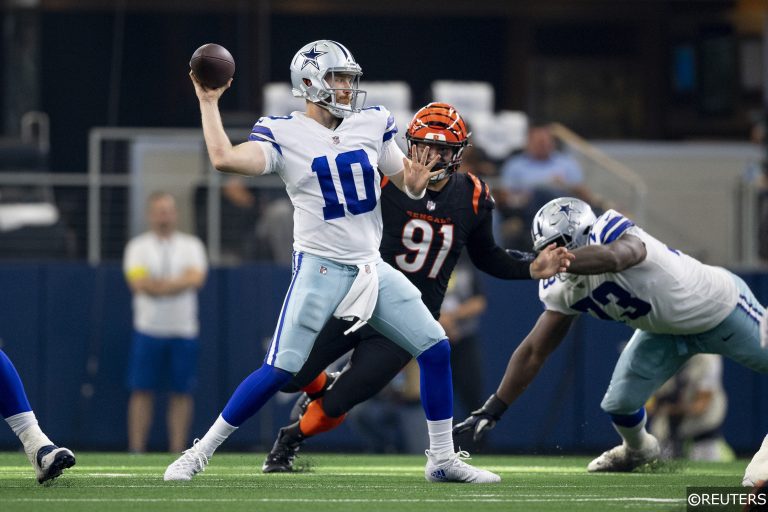 The Cowboys proved their doubters wrong with an upset win over the defending AFC Champion Cincinnati Bengals in week 2 and now go on the road to face a Giants team off to a 2-0 start for the first time since 2016.

Ahead of their clash on Monday night, we’ve got a 12/1 bet builder which you can back below.

This has been a one-sided series in recent times, the ‘boys winning a remarkable nine of the last ten clashes with their NFC East rivals, and that dominance is set to continue despite the presence of backup QB Cooper Rush, who performed well against the Benagals and is actually 2-0 as a starter for Mike McCarthy’s men.

Rush has thrown for 325 and 235 yards in his two starts and can surpass his mark in this one as well, with offensive coordinator Kellen Moore not afraid to let the Central Michigan product cut it loose.

Number one wideout CeeDee Lamb got off to a slow start against the Buccaneers on opening weekend, but has gone for 112 and 75 yards in the two games with Rush pulling the strings, seeing 11 targets on each occasion, and can confidently be taken to go over what seems a low number on Monday night.

Make no mistake, though, the best unit for either squad is the Cowboys’ defense, led by second-year hybrid linebacker Micah Parsons, who paces the league with four sacks but did pop up on the injury report with an illness this week.

It would be a shock were he not able to go, though, and it’s noteworthy he was almost exclusively used as a pass rusher against Joe Burrow in the win over the Bengals.

That spells trouble for Giants QB Daniel Jones, who has hardly impressed in ‘leading’ his team to their unbeaten start and is still wanting for a lack of receiving weapons. Look for Jones’s numbers to take a hit in this match up (yet to top 200 yards passing this season anyway) with the G-Men’s offense again likely to run through running back Saquan Barkley.

Don’t expect this to be a high-scoring affair, though, with the total points mark of 39.5 seeming about right. We’ll tease it up to 47.5 on the alternate points market and take the under.