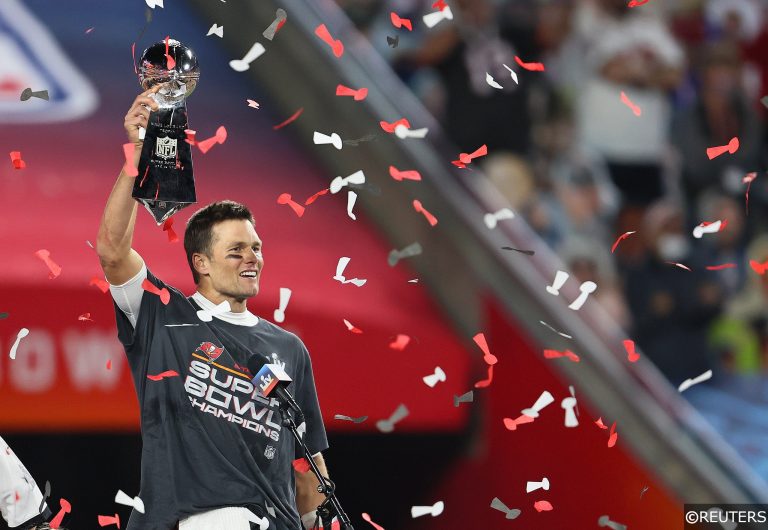 The 2021/2022 NFL playoffs get underway on Saturday night with the first two Wild Card games and with the road to Super Bowl LVI looming ahead of us I’ve rounded up all you need to know.

Don’t forget to check out all our NFL tips throughout the playoffs, too.

We’re into the second year of the NFL’s expanded 14-team postseason format now and it remains unchanged from last year, with seven teams from the AFC and seven from the NFC vying for a spot in the Super Bowl.

The top seed from each conference gets a bye in the first round, with the second seed playing seventh, third playing sixth and fourth playing fifth.

The second round sees the top seeds from each conference play the worst-seeded surviving sides while remaining sides battle it out within their division, eventually setting up the Conference championships at the end of January. The AFC and NFC champions will then head to Super Bowl LVI in February.

It picks up again next weekend as the top seeds enter the fray in the Divisional Round, with two games apiece on Saturday, 22nd January and Sunday, 23rd January.

When is Super Bowl LVI?

It’s a long two-week wait between the Conference championships and Super Bowl LVI, which is scheduled for Sunday, 13th February at the SoFi Stadium in California.

The game is set to begin at 11:30pm UK time and is expected to run until about 3am.

What about the half-time show?

You’ll do well to find a more star-studded one than this year, with Dr Dre, Snoop Dogg, Eminem, Mary J Blige and Kendrick Lamar all scheduled to make an appearance.

Where to watch the NFL playoffs & Super Bowl LVI

If you’re determined to stay on top of all the action, Sky Sports NFL will be broadcasting all 13 NFL playoff games live once again, along with plenty of supplementary content to keep you up to date.

NFL Game Pass ups the ante by adding on demand capabilities as well as live coverage, while also providing breaking news on the NFL Network.

Of course, those not willing to shell out the cash for full coverage can catch the NFL Show every Saturday night on BBC One or catch Channel 5’s EndZone on Sunday mornings, while BBC One will also be showing Super Bowl LVI live.

Well, if we knew that it wouldn’t be any fun, would it?

But our top NFL supremo has been on the case and gone in-depth on our NFL playoff outright predictions & tips article.