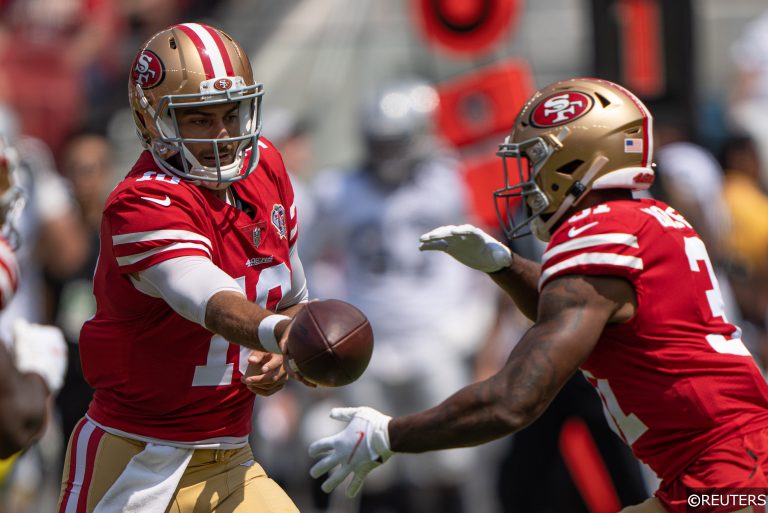 After sorting the weak from the strong via the longest regular season in NFL history, the line-up for the playoffs is complete. Now, the race for a spot in Super Bowl LVI intensifies, starting with this weekend’s wild card round of the postseason.

However, just who will feature in the NFL’s grand finale next month? After a look at both conferences, we have a 25/1 prediction for this year’s Super Bowl below.

The favourites for this year’s Super Bowl, the Green Bay Packers, and Tennessee Titans get a watching brief for the first round of the playoffs after securing a bye via finishing the regular season as the number one seeds in their respective conferences. They’ll enter the picture in the divisional round of the playoffs and will have the significant advantage of staging all their games at home, alongside the extra week’s rest.

History tells us that being the number one seed drastically improves your chances of reaching the Super Bowl with 32 of the 62 teams seeded first since 1990 contesting the big game and 14 have gone on to lift the Lombardi trophy.

The Packers were one of the 30 number one ranked teams not to go to the Super Bowl last year, losing to eventual winners the Tampa Bay Buccaneers in the NFC Championship game. They’ve got themselves back to the same point thanks to another remarkable season from quarterback Aaron Rodgers, who is the odds-on favourite to win the MVP award for a second straight year.

Boosting Rodgers’ chances of collecting a second winners’ ring is the return of key players on both sides of the ball from injury at just the right time and they’ll prove very difficult to beat in the frigid surrounds of Lambeau Field. The Buccaneers demonstrated that it can be done and it wouldn’t come as a huge surprise if they repeated that trick, particularly with quarterback Tom Brady in such remarkable form.

The 44-year-old, who is gearing up for the 19th playoff run of his 22-year career, leads the NFL in passing yards (5,316) and passing touchdowns (43), while he broke the record for pass completions in a regular season this term.

Next up to try and halt Tom Brady’s Bucs are the Philadelphia Eagles, the outliers in a conference which seems packed full of potential Super Bowl winners. The Eagles, who head to Tampa Bay on Sunday, are happy just to be in the postseason, and are a distant seventh in the betting for contenders to win the Super Bowl from the NFC.

The Arizona Cardinals, Los Angeles Rams and Dallas Cowboys all harbour genuine aspirations of reaching the big game but the one they need to watch out for is the San Francisco 49ers. The Niners won seven of their last nine games to snatch a wild card spot and look built to win playoff games. Both the offence and defence have climbed into the top 10 of DVOA – the standard-bearer in measuring the effectiveness of a team – and are peaking at the right time.

San Francisco controls games with a strong rushing attack, while they also have the ability to turn it on when necessary. Jimmy Garoppolo quarterbacks an efficient offence that leads the NFL in yards per play and is surrounded by a stellar supporting cast, including hybrid running back/wide receiver Deebo Samuel.

The Niners’ defense has also come on strong down the stretch with their defensive line proving very disruptive. They have limited their last five opponents to 23 points or less and will prove a very tough matchup in the wild card round for a Dallas Cowboys side that have had issues on offence in the second half of the year. At 25/1, they’re a great price to lift the trophy in California next month.

If we’ve read our tea leaves right, the next question is who will the 49ers beat in the Super Bowl? The AFC isn’t quite as jam-packed with contenders but it’s not easy to pick between those considered the conference’s elite with the Kansas City Chiefs top of the market. The Chiefs have made the Super Bowl the last two years and are as threatening as ever having won nine of their final ten matches in the regular season. The offence, lead by Patrick Mahomes, enters the playoffs on song, averaging 28.2 points per game this year, while the defence has improved significantly having been destroyed by Brady and the Bucs in last year’s Super Bowl.

The Chiefs missed out on the number one seed to the Titans, who look to have a great shot at reaching the Super Bowl based upon the history of being the top-ranked team in the conference. Few believe they can make but Tennessee have proven the doubters wrong time and time again, going 6-2 against teams who made the playoffs last year, while they are also due to get back superstar running back Derrick Henry for the postseason.

And yet, all the statistics suggest the Titans are in a false position with neither the offence nor defence ranking in the top-10 of DVOA, while they have the second-worst net yards per play number for any playoff team.

Instead, preference goes to the Bills at 7/2 to come out of the AFC. Buffalo has built a top notch defence, one that has allowed the fewest points (17) and yards (272.8) per game on average. While the defence has been strong for much of the year, the offence has been perceived to be a letdown having not been as explosive as 2020.

They might not be as flashy as last year but they are still putting up big numbers, finishing third in average points per game, while all 11 of their victories this season came by double-digit margins. When Josh Allen and the Bills have been on it, they’ve been explosive, destroying the Chiefs and Patriots on the road, and they look set to go one better than their AFC Championship defeat last year.