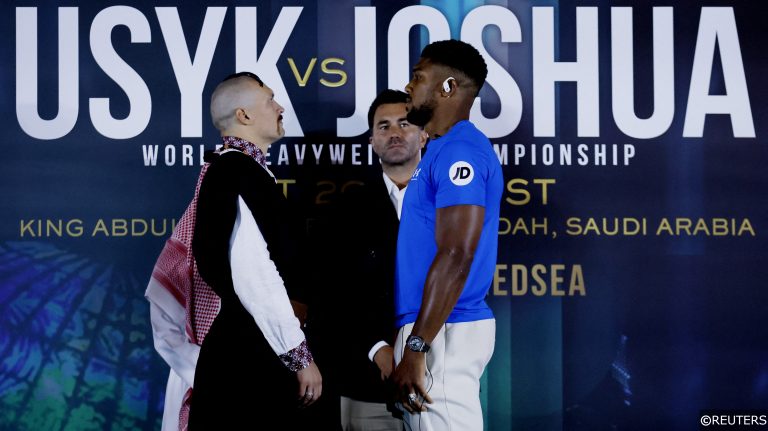 Anthony Joshua takes on Oleksandr Usyk on Saturday, August 20, as he bids to reclaim the heavyweight titles he lost to the Ukrainian in September last year.

Usyk won the first fight in convincing fashion, recording a unanimous decision win at the Tottenham Hotspur Stadium in London, but his preparations for this rematch have been far from ideal. The 35-year-old joined Ukraine’s territorial defence forces following Russia’s invasion of his homeland earlier this year before leaving to begin training for Saturday’s bout.

Joshua, meanwhile, has had some soul searching to do and has changed trainers, with Robert Garcia replacing Robert McCracken. The Briton has vowed to adopt a different approach and says this time he is preparing for a “12-round war”, and fans could well be in for a very different type of bout than the one these two heavyweights contested last year.

We’ve got the big fight covered, as well as a 77/1 accumulator for the undercard and details of how to watch Saturday’s main event.

Where to watch Oleksandr Usyk vs Anthony Joshua II

This fight, billed as The Rage on the Red Sea, will take place at the King Abdullah Sports City in Jeddah, Saudi Arabia.

The fight will be shown on Sky Sports Box Office and will cost £26.95, with the full undercard and main event shown, from 6pm. The fight can also be watched via live stream for the same price on your computer, mobile and tablet devices.

The main event ring walks are expected at around 10.30pm and promoters Matchroom have confirmed the first bell will sound at 10:54pm in the UK.

Who is on the Oleksandr Usyk vs Anthony Joshua II undercard?

I picked out Usyk to beat Joshua in the first meeting at 2/1 but he is just 8/15 to win the rematch after a dominant unanimous decision win. To get a bit more value out of this clash, the method of victory market could be the way to go and this time I’m backing the Ukrainian to get the job done inside the distance with a KO, TKO or disqualification win at 2/1.

Usyk very nearly stopped Joshua late on in their first meeting and I’m expecting a different kind of contest this time around. Joshua cannot afford to try and outbox Usyk again as that just didn’t work last time so he has to be more aggressive – and that means taking more risks.

Usyk is arguably the most technically gifted active fighter right now, across all of the divisions, and his ability to set traps and counter is unrivalled. Usyk has posted a few training videos and appeared at a couple of media events ahead of Saturday’s huge showdown and he looks incredibly confident and bigger than he did ahead of the first fight as well, so this time he can claim the win without needing the judges.

This is a tricky card to work out with so many heavy favourites so I’ve opted for a bold approach with this multiple and gone for a 77/1 treble covering the final three fights of the evening.

Croatia’s Filip Hrgovic faces China’s Zhilei Zhang in an IBF heavyweight title eliminator, meaning the winner could in theory take on the winner of Joshua’s bout with Usyk further down the line. Hrgovic, 30, is unbeaten in 14 fights and 12 of those have come inside the distance so he clearly boasts plenty of power.

‘El Animal’ should be able to record another stoppage but Zhang, 39, is an experienced professional and enjoyed success as an amateur as well, winning a silver medal at the Olympics in 2008. As a southpaw, Zhang could be an awkward opponent and I think he should be able to reach the second half of this fight so a win for Hrgovic in rounds 7-12 looks a good option.

Callum Smith takes on Mathieu Bauderlique in a world title eliminator bout and the Liverpudlian is a huge favourite, with a meeting with Artur Beterbiev potentially awaiting the winner. Smith has a significant height and reach advantage here, and should be the best opponent Bauderlique will have come up against.

However, the Frenchman has only lost once in a 23-fight career and has perhaps flown under the radar a bit as this will be his first contest outside of his homeland. Bauderlique is a southpaw, and Smith has struggled against southpaws in the past having needed the judges to overcome John Ryder so it may take him a while to work his opponent out on Saturday.

Smith is still on the comeback trail after losing his world titles to Saul ‘Canelo’ Alvarez back in 2019 and this is just his second outing since then. I’m expecting ‘Mundo’ to win this one without needing the judges but he may have to wait until the second half of the fight to do so against a tough competitor and the 11/2 on offer for Smith to win in the final three rounds stands out.

Usyk by KO/TKO or Disqualification at 2/1