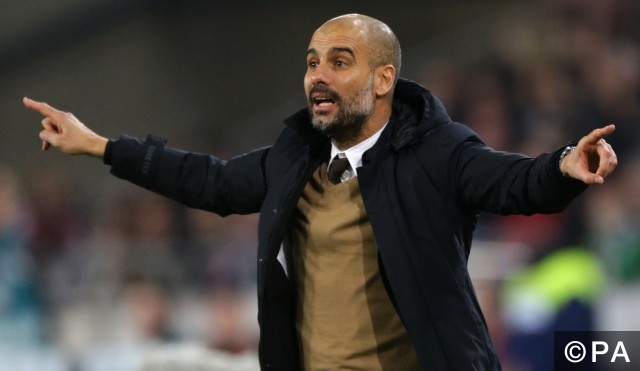 Everybody knew it was coming, but nevertheless the news that the world’s most respected, most intriguing, and most idealistically inclined manager will be coming to the Premier League is very exciting: “I want to experience a new city and I want to work in England” he said. “I have several offers but I haven’t signed anything yet”.

His appointment at any one of England’s four biggest clubs will be a huge coup for the league, adding to a growing roster of superstar managers being lured to our isles; by the beginning of next season all of Jose Mourinho, Pep Guardiola, Jurgen Klopp, and Diego Simeone could conceivably be working in the Premier League.

These are indeed exciting times, particularly for the club that Pep chooses. His footballing philosophy demands a complete overhaul of playing style and club management that will see his chosen team become an obsessive possession team of fluid high tempo football, radiating the undeniable aura of their charismatic leader. His tiki-taka is an extreme version of Total Football, a system of swarming telepathy and remarkable ball retention that peaks as beautiful football and troughs with bizarre tactical digressions that appear to champion ideology over result. It will never be boring.

Manchester City are the overwhelming favourites to tempt Guardiola and it is easy to see why the allure of the Etihad Stadium could persuade the Catalan to reject offers from elsewhere. Firstly, two close allies of Guardiola’s are currently employed in senior posts at Man City, namely ex-Barcelona duo Txiki Begiristain and Ferran Soriano (director of football and chief executive respectively).

City’s desperation to see Pep in a Man City tracksuit is an obsession that dates back to the very beginning of Sheikh Monsieur’s buyout of the club in 2008; this would be the realisation of a long-held dream that has begun to feel like an unavoidable destiny for both parties. In some respects Man City’s gradual shift in management has been designed precisely to please the Catalan.

City would grant Guardiola absolute freedom to reshape the club and its internal structures from top to bottom, welcoming his ideology and playing style with open arms. With a fantastic stadium, plenty of cash, and the chance to build the first defining legacy at the world’s newest super-club, they appear to many as the perfect venue for Bayern’s outgoing coach.

Man Utd are rank outsiders to land Guardiola, but it would be a good fit for both. Louis van Gaal’s narrow 2-1 win over Swansea seems to have temporarily relieved the pressure at Old Trafford but performances remain underwhelming and seriously tactical changes must be made if the Dutchman is to retain his job for much longer. Guardiola previously turned down the post before it was offered to Van Gaal, but he would surely be more open to the role if asked again.

And he would be given a large budget at one of the most prestigious clubs in the history of world football, mimicking the scenario that greeted him at both Barcelona and Bayern Munich. Van Gaal has already begun the process of recruiting young, intelligent players designed to instigate a short-passing and possession-centric tactical philosophy, thus increasing the likelihood of immediate success should Pep plump for Old Trafford.

On the other hand, rumours of Jose Mourinho imminently joining United are strong, and in truth this is the scenario that, as neutrals, we should all be wishing for. The feud between these two is fierce and unpleasant. Jose Mourinho views his managerial philosophy as the direct antithesis to the Barcelona style of possession and control, holding a bitter resentment towards Guardiola and his beloved Barcelona ever since he was overlooked for the job in 2008.

This is the perfect sporting rivalry: proactive versus reactive, idealism versus pragmatism, the aesthetics that have defined world football for a decade versus the man who has deliberately rebelled against them. In the aftermath of his Champions League triumph with Inter, Mourinho – bizarrely – mocked Guardiola for failing to achieve what he had. This rivalry is not staged; that these two could lock horns from either side of Manchester should make any football fan giddy with excitement.

Roman Abramovich is another chairman that has pursued Guardiola for years, although his management may have seriously undermined his ambitions. Unlike the carefully nurtured scenario at Man City Abramovich has ruled with an iron fist and now, after dispatching of Jose Mourinho for a second time, looks toxic.

Guardiola’s desire for total control seriously clashes with Abramovich’s methods, although it is plausible that Pep is the one man in football the Russian oligarch would allow free reign. It is, however, unlikely Guardiola would receive a guarantee that he will be allowed time to implement his system – regardless of whether or not he could trust any such promise.

But this deal is still far from impossible. For starters, Chelsea are the only club currently without a permanent manager and thus they are in poll negotiating position; Pep may feel uncomfortable undermining fellow managers by speaking with the likes of Man City, Man Utd, and Arsenal.

This seems like the least likely option for Guardiola, but if Arsene Wenger was to leave in the summer then Arsenal would in fact be the perfect venue for the former Barcelona coach. Wenger’s tactical aesthetics are more closely aligned with Pep’s than any of the other teams, and having gone 12 years without a league trophy it would present a fantastic challenge.

Furthermore, their finances are in a superb position whilst the youth system and training facilities are streamlined in a style that Guardiola would commend. With a sizeable transfer kitty and the prospect of building a dynasty in London, surely the Catalan would be tempted by a proposal.