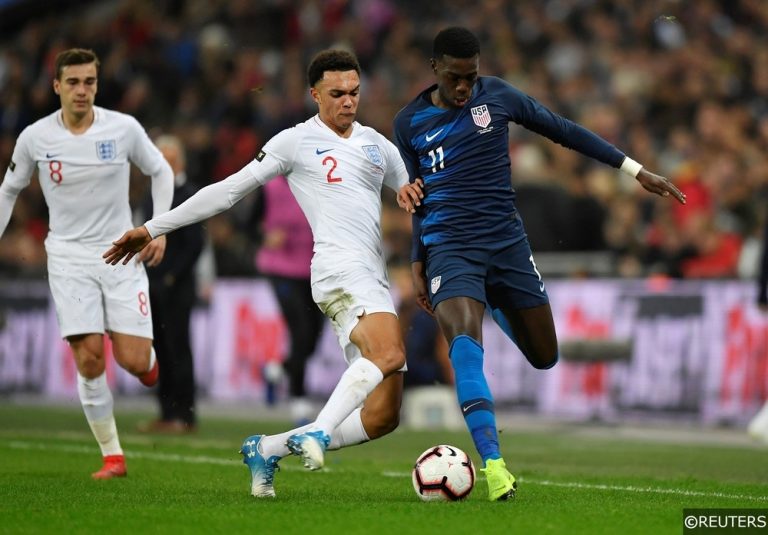 The Under 20 World Cup in Poland has been narrowed down to just eight teams. We have a wide range of sides fighting for the biggest youth trophy in world football. The quarter-finalists are made up of two European teams, two African sides, two South Americans and one each from North America and Asia.

That leaves us with a collection of talents from around the world. With the quarter-finals all live on TV this weekend, we’re taking a look at the names to watch out for. Here’s our lowdown on the outstanding talents who will be out to impress in this weekend’s matches.

Watford have been impressing with their South American scouting, with Cucho Hernandez the latest. The forward joined the Hornets in 2017 before joining Huesca on loan. He fired the club to promotion, before scoring at Real Madrid and Barcelona last term.

The last teen to manage that double was Sergio Aguero, so Hernandez is in good company. He’s hit three goals at this tournament, which helps to establish himself as one of the top strikers in the tournament.

Hernandez is joined by Denys Popov on three goals in the scoring charts. However, Popov is a defender. The Dynamo Kyiv man has been a regular threat from set pieces while helping Ukraine through to the last eight.

Popov have represented Ukraine at all age levels, while he could make the step up. A goalscoring defender is a rarity so he should be catching the eye. Having scored in three of their four games in Poland, Popov is one to watch this weekend.

See our Colombia U20 vs Ukraine U20 Predictions Here

Italy are the current favourites for glory in Poland, after beating the hosts in the last 16. The Italians have succeeded thanks to their tactical nous, while they have a typically strong defence. Despite that, they’ve been saved on several occasions by Alessandro Plizzari.

The AC Milan keeper needs to fight Gianluigi Donnarumma to start for club and country. However, Plizzari is getting minutes in Poland. He’s been a fantastic player for the Azzurri this summer, while he’s likely to move on if he can’t dislodge Donnarumma.

The African champions have been mixed in Poland so far, but they do have a few standout players. They currently have a few plying their trade in Austria, who could step up to feature for Red Bull Salzburg. That includes forward Koïta, who has made an impact at this tournament.

The forward has scored twice so far, including a vital late goal in the last 16. He scored in the 120th minute to level the clash with Argentina 2-2, Koïta then went on to score a penalty as Mali won the shootout. That’s proven his worth for his nation, while the 19-year-old will be looking to step things up against Italy.

See Our Italy U20 vs Mali U20 Predictions here

Celtic fans are no strangers to Weah, who spent a few months on loan at the club earlier this year. He went on loan from PSG to the Scottish champions. He made 17 appearances overall in Glasgow, an experience which should help him moving forward for club and country. He’s impressed at the Under 20 World Cup, including hitting the winner against Qatar.

He’s the son of former AC Milan and Chelsea player George Weah – the current President of Liberia. Weah junior has been vital for the USA, playing all but three minutes of their games in Poland. He featured in the last 16 win over tournament favourites France ahead of a return to Paris later this year. He’s set to play a vital role in the US national team going forward.

Ecuador are enjoying their best ever World Cup campaign, which could get even better. This is a golden era for the Ecuadorians, who won the South American Youth Championship earlier this year. That title came thanks to striker Leonardo Campana, who is emerging as one of the most talented young forwards in the continent.

Campana hasn’t been in the same scoring form in Poland, but he’s already been capped by the senior side. He’s clearly talented, so we expect him to make an impact on this tournament before heading home.

See Our USA U20 vs Ecuador U20 Predictions here

Attacking midfielder Lee Kang-in has played a key part in taking South Korea to the last eight. The 2017 hosts have picked up some decent results so far, with the Valencia man at the heart of everything so far.

Kang-in was scouted by Valencia aged just six, while he’s made almost 30 appearances for their B team. He’s moved up to feature in the senior side, while a first senior international cap is only around the corner.

Dionkou is a youngster even by the standards of this tournament. He’s just 17 years of age, while the full-back is progressing well at Manchester City. While his future at the Etihad isn’t certain, Dionkou could well feature for Senegal in this tournament in 2021. He’s getting vital experience on the world stage while progressing through one of the best academies in the world.

See Our South Korea U20 vs Senegal U20 Predictions here