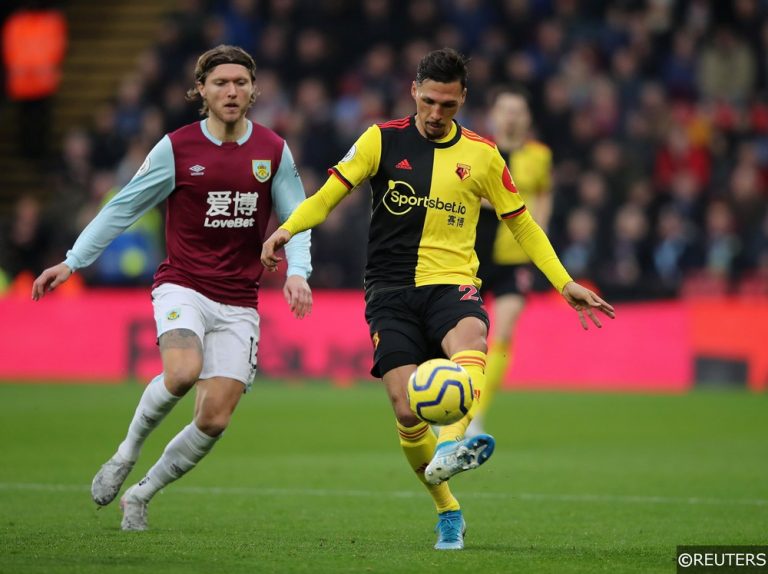 As per the norm, supporters have an exciting programme of top-level football to consume this weekend, with ten fixtures split over Saturday and Sunday.

As always, bet365 have a range of potentially lucrative individual player specials and markets available for the day’s games, and we’ve been poring over the options to find some picks that we think are well worth your consideration.

Check out our selection of player special betting tips the latest round of Premier League fixtures below:

Don’t forget – you can also find all of our match previews and betting tips for the weekend’s action on our Premier League predictions page.

You can find all of the player special odds and prices listed below in bet365’s extensive Premier League betting markets. We recommend you sign up for a bet365 account if you want to bet on player specials. New customers can claim up to £100 in bet credits.

Magpies’ midfield destroyer Issac Hayden will need to be on high alert and on top of his game if he is to limit the influence of the Citizens’ marauding maestros Kevin de Bruyne and David Silva, and the 24-year old has the skillset to make disrupt the visitor’s flow.

Hayden has averaged more tackles per Premier League game this season (2.7) than any of his Newcastle teammates this term and we’re tipping the former Arsenal youngster to challenge his way past our target with relative comfort this weekend.

James Ward-Prowse over 0.5 shots on target (SOUTHAMPTON vs Watford)

With three Premier League goals to his name already this season after 13 starts for the Saints, talented technician James Ward-Prowse already looks well on his way to eclipsing his haul of seven goals for the entire 2018/19 campaign.

The 25-year old carries a considerable goal-threat for Southampton in most games, and Ward-Prowse has averaged 1.8 attempts per 90 minutes this term – a total that makes him the third most prolific shooter at the Saints this season.

Ward-Prowse, of course, is also one of the Premier League’s most dangerous players from free kicks and with so many goal-threatening weapons in his armoury, we think the midfielder is priced generously to test Ben Foster in the Hornets’ goal at least once on Saturday.

You can find more free Southampton vs Watford betting tips in our detailed match preview.

Jose Holebas to get booked (Southampton vs WATFORD)

Veteran Greek wingback Jose Holebas is routinely one of the most carded players in the Premier League.

Last season, the 35-year old was cautioned a staggering 12 times in 27 Premier League starts for the Hornets, and the hard-hitting stalwart has already picked up five yellow cards in just 10 starts for Watford this term.

In total, Holebas has been shown yellow an eye-watering 40 times for Watford in England’s top flight during his career, and in what promises to be a keenly contested tussle between the Hornets and Southampton at St. Mary’s, we think the defender might get into trouble again.

Hard-working French midfielder Matteo Guendouzi has been a shining light for Arsenal through what has been an overwhelmingly gloomy period for the Gunners.

The 20-year old has already established himself as a key component in Unai Emery’s team, and Guendouzi has played more passes on average per Premier League game this season (62.8) than any of his Arsenal counterparts since the summer.

Interestingly, Guendouzi recorded his highest number of passes for the season so far in the Gunners’ games against newly promoted duo Sheffield United (102) and Aston Villa (82), and we think the fiery youngster can come close to matching those distribution figures against the third new club in the division this year – Norwich City.

James Maddison over 0.5 shots on target (LEICESTER CITY vs Everton)

Inventive attacking midfielder James Maddison is enjoying another incredibly productive individual campaign for Leicester City, and the 23-year old has already bagged four goals and two assists for the Foxes this season to go along with a string of virtuoso performances.

Maddison’s overall goal-threat seems to have climbed a few notches this season and the statistics behind his output support that assertion.

In 2018/19, Maddison averaged 2.3 shots per 90 minutes of Premier League action, though his attempts total has jumped to 3.0 per game this season.

On Sunday, Maddison will be taking aim against an Everton team in the grip of a crisis, and we think the highly-rated Foxes star is priced brilliantly to register 0.5 shots on target.

Kick Off December in Style with 888Sport’s 40/1 for Leicester to Beat Everton enhanced odds offer!

A five-fold accumulator featuring our player special betting tips above is available at 19/1 with bet365!