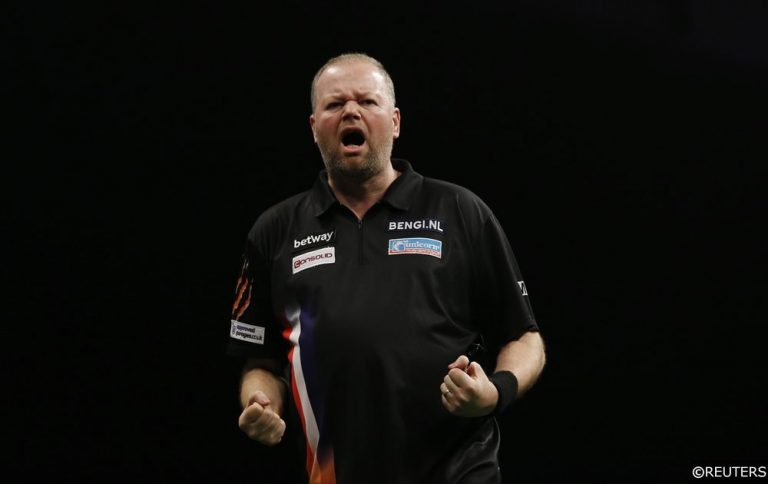 The first phase of the Premier League is now complete, and it’s been an exciting nine weeks of action. The table may have a familiar feel to it, with Michael van Gerwen leading the way, but even the mighty Dutchman has looked vulnerable at times this season. James Wade and Daryl Gurney have both beaten MvG so far this season, and Rob Cross has looked in really good form firing in 100-plus averages week after week.

At the bottom of the table, it was no surprise that Raymond van Barneveld was eliminated in Rotterdam last week, a bet recommended to our followers at odds of 9/4. There was much debate as to whether ‘Barney’ deserved his place in the Premier League this season at all, and had he not announced his decision to retire at the end of this season just before the Premier League line-up was finalised, he may have been overlooked this year. In fact, following his 7-1 defeat to MvG last week in Rotterdam, he announced that he was going to retire with immediate effect, only to overturn that decision less than 24 hours later. With issues in his private life to contend with as well, ‘Barney’ could probably do with some time away from the board. However, if he wants to play in one final World Championships, he’s going to have to play most events on the ProTour and European Tour to get enough ranking money to qualify. There’s no doubt when in the right mindset ‘Barney’ can mix it with the best of them, he reached a ProTour final only a few weeks ago, and it will be great to see him on the Ally Pally stage once more in December.

Some good performances from the ‘Contenders’

The Premier League has had an added dimension to it this year with the introduction of the ‘contenders’. With Gary Anderson’s withdrawal from the tournament at the last minute, rather than replacing the Scotsman directly, the PDC decided to put the Premier League regulars up against a different player each week. Some will still say that this was the wrong decision, and someone like Simon Whitlock, Dave Chisnall or Adrian Lewis should have been given another shot, but in the main the ‘contenders’ didn’t disappoint. Admittedly none of them won their respective matches, but Chris Dobey, Luke Humphries, John Henderson and Dimitri van den Bergh all took a point off their more illustrious opponents. And John Henderson gave us one of the moments of the darts season so far, as he walked onto the Aberdeen stage accompanied with bagpipes at full blast, and then battled back from 6-4 down against Michael van Gerwen to win the final two legs.

The remaining eight Premier League players lock horns in Belfast this week, with the main aim now to get as many points on the board as possible to qualify for the O2 on May 23rd. MvG and Cross lead the way with 13 points, with the Dutchman a 1/6 favourite to be leading the final table in May. The odds are prohibitively short, but in the 14 years of the Premier League only Phil Taylor and Michael van Gerwen have ever topped the table after the regular season. His odds to win the Premier League title are slightly better at 1/2, but still short enough, with Rob Cross the second favourite at 11/2. Next in the betting is James Wade (12/1), ‘The Machine’ has looked impressive this season, and he actually tops the averages so far in this PL campaign. His 100.88 average is better than both van Gerwen (100.22) and Cross (99.66), and with 11 points already to his name, is in a good position to progress.

Somewhat surprisingly it’s Michael Smith at the bottom of the table, with just seven points. The World Championship runner-up hasn’t looked himself for much of this season, and his average of 95.31 is the lowest of the remaining eight competitors. There’s still plenty of time for Smith to haul himself up the league table, but it’s worrying for ‘Bully Boy’ that his only wins this PL campaign have come against the eliminated van Barneveld, the ‘contender’ Nathan Aspinall and Gerwyn Price.

Peter Wright certainly has plenty to do as well, he plays Michael Smith this week in Belfast, and if there is a loser in that match, their place at the O2 will be in real jeopardy. Price has certainly enjoyed his Premier League campaign more than last year, the Welshman was the only unbeaten player after five weeks, but three consecutive defeats have seen him plummet down the table. He has been playing well on the Tour this season though, and his win against Wright last week has kept him in touch of a top four spot.

Daryl Gurney is a man in-form right now, he’s won his last three Premier League matches, and followed those results up with his first ever European Tour title at the weekend in Germany. He’ll travel back home to Belfast this week full of confidence, and having just missed out on the play-offs last year, will be desperate not to let history repeat itself.

Gurney defeated Mensur Suljovic last week, which ended a run of three consecutive wins for the likeable Austrian. It’s been an up and down season for our outright pick, he’s looked impressive one week, only to disappoint the next. With ten points on the board, it’s a solid enough start, but we’ll need ‘The Gentle’ to pick up a few more wins in the coming weeks, as he finishes his campaign with tough fixtures against Cross and van Gerwen.

With the winner of the tournament set to win £250,000 and the coveted trophy, it’s sure to be a dramatic eight weeks before the 2019 Premier League of Darts champion is crowned.