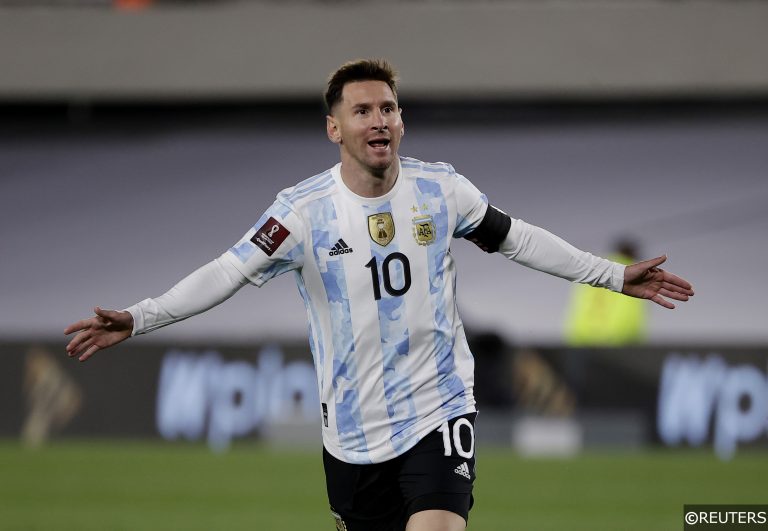 Now that the arguably ill-timed international break is over and we know all 32 nations competing in Qatar 2022 later this year, we can start to look towards the first ever winter World Cup and get an idea of who might be frontrunners to lift the Jules Rimet in December.

After seeing many of the teams in action over the last few weeks, we have taken a look at some potential early outright options.

The last four World Cups have been won by European nations, with Italy, Spain, Germany and France all coming out on top, but South American duo Brazil and Argentina could now be ready to mount a serious challenge.

Brazil breezed through qualifying unbeaten and by winning 14 of their 17 matches, although there are questions regarding Tite’s side, as they have not faced a top European opponent since being knocked out of the 2018 World Cup by Belgium.

Those same questions cannot be labelled against Argentina, who comprehensively beat Italy earlier this month in the Finalissima to underline their credentials as serious contenders for a first World Cup success since 1986.

La Albiceleste have gone nearly three years and 33 matches without losing a match and may be best placed to capitalise as some of Europe’s big hitters appear to be struggling.

England and France certainly fit into that category after disappointing efforts in the Nations League this month, while questions remain as to whether the likes of Spain and Germany are ready to conquer the world once again.

Dane’s dark horses for the title

Denmark were one the surprise packages at Euro 2020 last summer, reaching the semi-finals, and they have maintained that form ever since, topping their World Cup qualifying group after registering nine wins from 10 matches.

Kasper Hjulmand’s side have continued in the same vein during the Nations League, as they currently top their group and registered a memorable away victory in Paris against world champions France earlier this month.

The Danes have a strong spine to their squad, with Kasper Schmeichel in goal, captain Simon Kjaer leading the defence, and of course Christian Eriksen, who has returned to form in sensational style since joining Brentford in January.

Other potential dark horses that could go all the way in Qatar include AFCON champions Senegal, who have arguably the strongest squad ever seen from an African side at a World Cup, with Edouard Mendy, Kalidou Koulibaly and Sadio Mane spearheading their charge.

Serbia could also be a team to look out for, especially if Fulham striker Aleksandar Mitrovic can maintain anywhere near the form that saw him score 43 goals in the Championship last season.

England’s Harry Kane was the Golden Boot winner at the 2018 World Cup and could be a shrewd choice to challenge for that honour again this year, but only if the Three Lions can improve on their recent collective struggles in front of goal.

Kane is currently among the favourites to top the scoring charts in Qatar alongside world-class players such as France duo Kylian Mbappe and Karim Benzema, as well as Portuguese superstar Cristiano Ronaldo.

Further down the betting, Netherlands forward Memphis Depay could offer some value. The 28-year-old enjoyed a fine first season at Barcelona and averages over a goal every other game in 80 appearances for his country.

The Dutch have been handed a favourable draw for the finals alongside hosts Qatar, Senegal and Ecuador, and if they can top that group, then a potential showdown with Iran, United States or Wales is likely to await.

Louis van Gaal’s side should have more than enough to see off any of those three sides in the last 16, and a good goal return from Depay during those opening four games could send him on his way to the Golden Boot.

There is plenty of value in backing teams to qualify from their group in Qatar, including in Group B, where Wales will be looking to advance to the knockout stages after qualifying for their first World Cup since 1958.

Robert Page’s side have plenty of firepower within their ranks, most notably through superstar forward Gareth Bale, which could be enough to get them through Group B at the expense of Iran and the United States.

Similarly in Group C, where Poland will be bidding to make it out of a World Cup group for the first time since 1986, with star striker Robert Lewandowski likely to play a prominent role in what could be his final major tournament appearance.

The Poles have been handed a tough draw after being pitted alongside Argentina, last-16 regulars Mexico and Saudi Arabia.

It may well be a straight shootout between Poland and Mexico for a place in the last 16, and after disappointing showings at their last two major tournaments, now could be time for Lewandowski and co to shine on the global stage.

Scandinavian football: FST’s coverage, where to watch and what you have missed