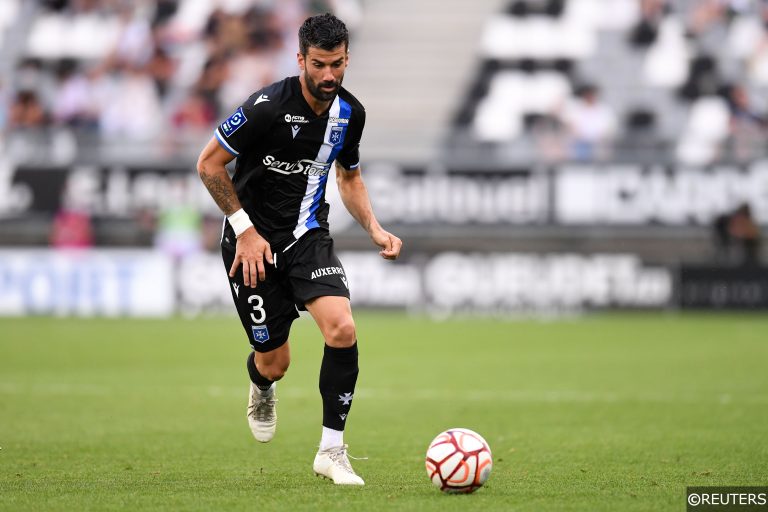 The top flight in France gets underway on Friday August 6 but the battle to join the elite has already begun and the second round of Ligue 2 fixtures take place over the weekend.

Toulouse narrowly missed out on promotion last season with defeat in the play-offs to Nantes, while Amiens and Dijon dropped down from Ligue 1 and those two sides meet this weekend.

We’ve got predictions for each game, as well as a juicy 224/1 accumulator to consider ahead of the action in the French second tier!

Nimes made a solid start to life in the second tier with a draw at Bastia in their season opener, taking an early lead before being pegged back as the two sides played out a 1-1 draw.

Dijon look set for another tough yeah after a 3-1 defeat at home to Sochaux last time out, a result that means they have lost five of their last six competitive games stretching back into last season.

Dijon have lost nine of their last 10 away games and we think they could be heading for another defeat on Saturday.

Toulouse have a chance to pick up a first win of the season on Saturday when they head to Nancy in Ligue 2.

Les Tefece picked up 29 points in 17 games on their travels last season and should have enough firepower to overcome Nancy, who were beate 2-1 at Pau FC in their home opener.

Toulouse did the double over Nancy last season, scoring seven goals and conceding two in the process, and we think they can claim a comfortable victory.

Ajaccio opened the new season with a draw at likely title chasers Toulouse last time out and should be able to pick up their first win when Amiens visit on Saturday.

The visitors were particularly poor travellers last season with just four wins in 19 away games.  Amiens failed to win any of their final 10 fixtures on the road (L5, D5) and went down 2-1 at home to Auxerre in their opener this term and we feel home advantage should be enough to see Ajaccio over the line in this match-up.

Guingamp had the better of the two meetings between these two teams last season with four points and we feel they may just be able to take the spoils in this meeting.

L’EAG ended last season with two wins in their final three home games after going nearly six months without a home win., while Valenciennes lost six of their final seven away games last season and failed to score in four of those so we think a home win looks a good option here.

These two sides finished level on 41 points last season, but they’re in a very different place coming into this clash. Caen won 4-0 against Rodez in their opener, while Niort could only draw 0-0 against Valenciennes.

The hosts are now winless in nine league games in Ligue 2 and they’ve failed to score in three. With Caen building off of a huge opening win they are great value for victory this weekend. The hosts lost seven of 19 home matches and we’re predicting another loss for them here.

Dunkerque slipped up at home in their opener and we have little faith in them in this clash with a Paris FC side who are coming off a big win to boost their promotion ambitions.

Outside of the top eight last term, Paris won nine of 12 home games (D3). Meanwhile, Dunkerque’s away trips saw them lose 12 of their 15 matches with sides above them. Paris won 1-0 in both meetings between the two last term so we like the look of a home win and a slender victory for the hosts.

Rodez lost 4-0 in their opening game and they’re now winless in 10 matches, conceding in every single one of those outings. With Pau heading here having seen BTTS land in their last three Ligue 2 games, it’s worth backing goals in this clash.

Five of Pau’s last six away trips in Ligue 2 have seen both teams score, with four finishing as score draws. Meanwhile, Rodez have seen four straight score draws at home in the league, which has us backing both teams to score and a 1-1 draw in our predictions.

Sochaux won 3-1 in their first game of the season last weekend and we’re backing more goals in this clash. The hosts have seen BTTS land in three of their last four home games.

Meanwhile, Le Harve were more clinical scorers on the road than at home last term, scoring 1.1 goals per trip. They’ve scored in their last five away games in Ligue 2, but the last four of those have seen both teams find the net. We’re backing that run to continue here, with both teams to score and a 2-1 win for Sochaux our predictions.