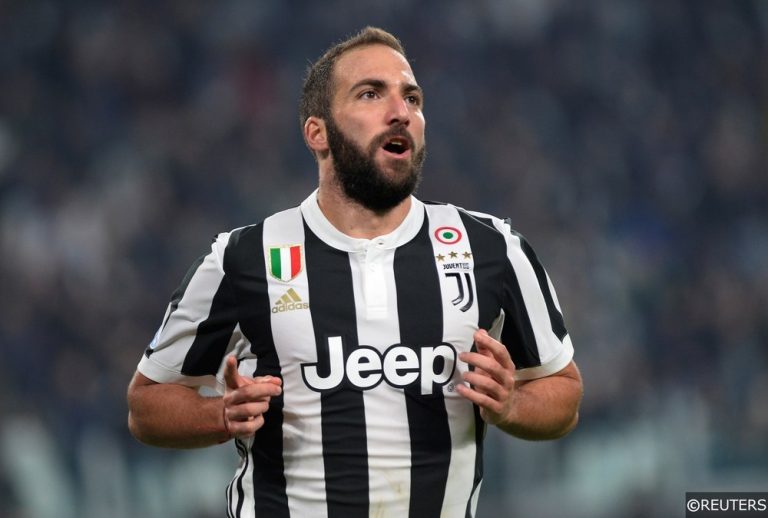 Serie A isn’t holding back as Italian football returns from the international break. This weekend kicks off with the three best sides in the league all in action. However, can they title hopefuls really be tested? With big Champions League clashes looming Juventus, Napoli and Inter are getting their league commitments out of the way early.

In the opening couple of weekend’s the trio have looked a cut above the rest. They’ve scored 18 times between them, while they have won every game bar Napoli’s loss at Juventus. The three have all shown themselves to be a cut above the opposition, with a gap forming between them and the rest.

All three sides are backed up by exceptional attacking options. They each have a new-look forward line this term, which is paying off so far. Given their high scoring start, we’ve picked out an anytime scorer treble covering the Super Saturday action in Italy, taking in three top forwards from the league’s elite clubs.

Maurizio Sarri returns to the dugout this weekend, which should make for an interesting debut. Fiorentina and Juve have a long rivalry, with no love lost between the pair. However, there’s another plot running through this clash. Sarri’s arrival in Turin has brought big changes, while it has marked the return of a man who was considered a cast-off by the champions.

Gonzalo Higuain managed to hang around in Turin through sheer stubbornness. The Argentine refused to move, despite interest from Roma. It’s certainly a brave choice by a man who failed at both AC Milan and Chelsea last term. However, he is up and running for the season thanks to a goal against Napoli, which he is aiming to build on this weekend.

Higuain has a fine record against Fiorentina, as he’s been involved in 10 goals against la Viola. He scored home and away against them in 2015/16, his Napoli season under Sarri. In a Juve shirt, Higuain has scored in three of four meetings with Fiorentina, while he is now meeting a side who have conceded six times in two games so far. La Viola are underperforming, while we’ve backed a comfortable away win in our Fiorentina vs Juventus predictions.

Given the hosts’ defensive issues and Higuain’s redemption arc, we are backing the forward at 7/5 with BetVictor to score here.

Napoli’s first home game of the campaign is likely to come without Lorenzo Insigne and Arkadiusz Milik. However, Carlo Ancelotti has attacking options. The Naples side were able to tempt Hirving Lozano away from Holland in the summer. The Mexican has already made an impact in their 4-3 loss at Juve.

Lozano’s 41-minute cameo against Juve left him with an xG score of 0.41, while he ended up grabbing a debut goal. Lozano is following that up with a start in the front two. That puts him in an advanced position, which should benefit the winger. The other positive for Lozano is the current state of opponents Sampdoria.

The visitors have conceded seven goals after just two matches this term. Samp are shipping 15 shots per game on average, conceding from 23% of them. With Lozano showing that he’s ready to get involved up top, he’s likely to get chances against the team in last place.

Sampdoria have conceded 16 times across their last six visits to Napoli. That has promoted us to back the hosts to score plenty in our Napoli vs Sampdoria predictions. On top of that, we like Lozano to score anytime at 23/20 with BetVictor.

Finally, we’re looking at the clash at San Siro as Inter Milan aim to continue their perfect record so far. They have a straightforward meeting with Udinese, who were just beaten at home by Parma. With the visitors struggling against the league’s top sides last term, we’ve gone with Conte’s men to win in this one in our Inter Milan vs Udinese Predictions.

Inter’s good start coming into this game has been in part due to the impact of Romelu Lukaku at the club. The forward was the final piece in the puzzle for Inter, performing a vital role in attack which saw him hold up the ball and create space for others.

However, Lukaku has scored twice already for Inter, including the winner in their visit to Cagliari last time out. The forward is obviously helped by Inter’s improved creativity. Meanwhile, the forward should expect to score a goal against a Udinese side who are already floundering. Lukaku has stepped up his game with six goals in his last six games, none of which came in a United shirt. With that form, he’s a solid price to find the net at 21/20 with BetVictor.

Overall, these three forwards can be found at 9.58/1 with BetVictor when combined into a treble for this week’s action. We are backing them all to notch on Saturday as their sides all continue to push for first place. Given the chances they’re each creating and their high scoring starts, all three sides should produce enough opportunities to justify that price.