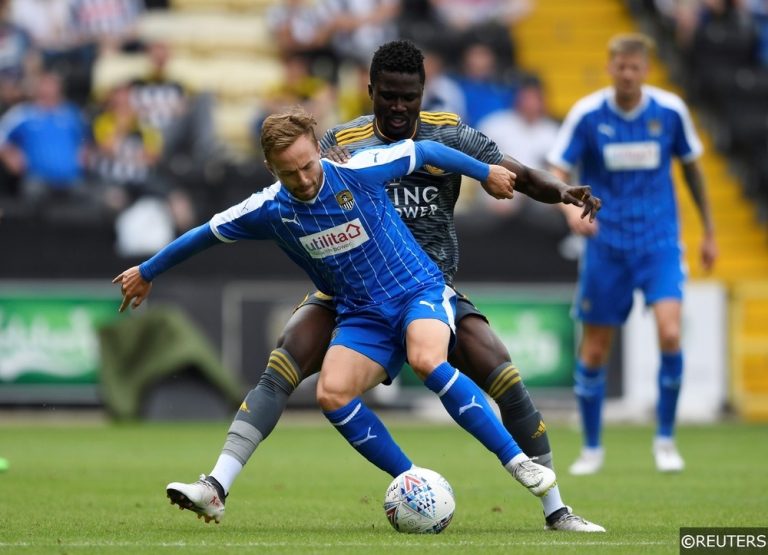 So there we have it then, another exciting weekend of football has passed and although we are still early in the season, the table is already starting to take shape. Below we look at the winners and losers from League Two and we discuss just what happened in another enthralling weekend in England’s fourth tier.

Lincoln climbed to the top of League Two following their comfortable victory over our pick for the League Two title, Notts County. With County winless and at the bottom of the league, it proved to be the last time boss Kevin Nolan would take charge of the side as shortly after the final whistle, County announced they had parted company with the former Newcastle, Bolton and West Ham player.

Nolan took charge of the Magpies in January 2017 and led them to the League Two play-offs last season. But they have picked up just one point in five league games this season and that was enough for the County board to make him the second managerial casualty in League Two this season.

In the match, Lincoln skipper Lee Frecklington fired the Imps in front with a spectacular volley, but County levelled through Andy Kellett. Bruno Andrade restored City’s lead and then teed up Harry Anderson for the third goal early in the second half as the rock-bottom visitors’ winless start to the campaign stretched to five league games.

It has been quite the start to the season for striker Ollie Palmer, and he continued his excellent form as he hit his fifth goal in five league games to help Crawley clinch their first home win since mid-February with a 3-2 victory over Bury.

Bury, with only one win in their previous 30 away league games, made a disastrous start when skipper Jimmy Smith gave the hosts the lead after only three minutes. Smith struck at the far post by heading in a whipped cross from George Francomb.

Crawley keeper Glenn Morris was called into action when he held a goal-bound shot from Dominic Telford after good work by Eoghan O`Connell. The Reds thought they had doubled their advantage when Filipe Morais netted with a deflected 30-yarder, but referee Craig Hicks disallowed it for offside after consulting with his assistant.

Striker Chris Dagnall pulled Bury level with his first goal for the club on 56 minutes, picking his spot from 15 yards after Telford`s pass, and it got even better around 20 minutes later after substitute Danny Mayor drove Bury ahead on 78 minutes from Telford`s pass. Crawley substitute Panutche Camara responded to make it 2-2 three minutes later by heading in Francomb`s free kick and Palmer struck to settle the issue two minutes from time by capping a fine run with a low shot passed keeper Joe Murphy.

Read More: How the shorter transfer window is benefiting the Championship

In the last two years at Exeter City, former boss Paul Tisdale lead the Grecians to back to back defeats at the play-off final. This summer, the one time longest serving manager in the country decided his time at St James Park had come to an end and he left the club to take up a role at the MK Dons.

This weekend saw Tisdale face off against his former charges for the first time since his departure and he was the one who came out on top after Kieran Agard missed one penalty but netted a second as MK Dons saw off 10-man Exeter.

The visitors were reduced to 10 men after 54 minutes when Grecians defender Dean Moxey handled George Williams’ cross inside the area and was shown a second yellow card. Agard stepped up to take the resulting spot kick, but his effort was well saved by Exeter goalkeeper Christy Pym, who kept the game scoreless.

The striker made no mistake 10 minutes later, though, as he scored with his second penalty, awarded following Jayden Stockley’s clumsy handball. Tisdale’s former side huffed and puffed and almost snatched an equaliser through Luke Croll in stoppage time, but they could not prevent new boss Matt Taylor suffering his first defeat as the club’s manager.

Read More: Stats suggest Barnsley are on their way to a big season

It’s been a tough start to their campaign for Northampton Town following their relegation, but they claimed their first League Two win of the season after with victory at Colchester United. The Cobblers almost scored after 26 seconds through Kevin Van Veen, who blasted over from Junior Morais’s pass and Jack Bridge fired straight at Colchester goalkeeper Dillon Barnes while Matt Crooks, Sam Hoskins and Sam Foley also went close as the Cobblers pressed.

Northampton went ahead less than three minutes after half-time through Crooks, who advanced towards goal before firing home a low 25-yard shot. Barnes then denied Crooks, but Colchester midfielder Harry Pell’s header was saved by keeper David Cornell and substitute Luke Norris’s header hit the bar.

Tom Eastman cleared Van Veen’s effort off the line before Billy Waters doubled Northampton’s lead in the first minute of stoppage-time when he flicked home from close range, after fellow substitute Andy Williams had helped on Sam Hoskins’ pass. Colchester pulled a goal back in the fifth minute of stoppage time through Aaron Pierre’s own goal after Cornell had denied Sammie Szmodics, but Northampton claimed victory.