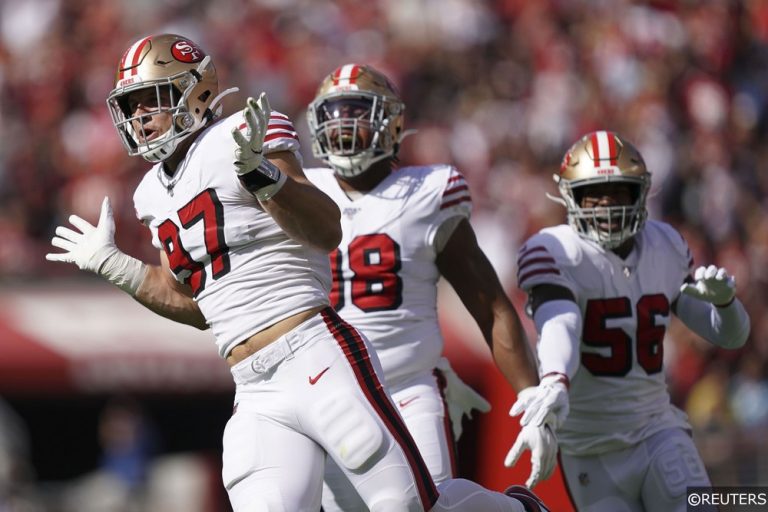 It all comes down to this. The last game of the 2019-2020 NFL season will take place at Hard Rock Stadium in Miami, Florida as the AFC Champion Kansas City Chiefs take on the NFC Champion San Francisco 49ers. It’s shaping up to be one of the best Super Bowls of memory as we have two of the best head coaches in the league leading two of the NFL’s top offenses against each other. Will the Chiefs’ passing attack be too much for the 49ers to handle? Or will the 49ers control the game with the dominant running game? We answer all of these questions and a whole lot more in our Super Bowl preview and other prop articles.

We’ve got plenty of betting tips, analysis and predictions available on FST too, so check them out below:

When is Super Bowl LIV?

Kansas City Chiefs vs San Francisco 49ers will kick off at 11:30pm UK time on Sunday 2nd February 2020 and will run into the early hours of Monday morning, so best get some coffee in for the Monday morning!

Where to Watch Super Bowl LIV

UK viewers have a number of different options for watching the Super Bowl. Free-to-air coverage on BBC One will start at 11:25pm, where you can join Mark Chapman, Osi Umenyiora and Jason Bell for all the action.

If you fancy an earlier start to get yourself in the mood, you can tune in from 10pm on Sky Sports Mix, Sky Sports Action and Sky Sports Main Event.

American football is growing in popularity in the UK, and despite its late hour millions stay up late to watch and bet on the Super Bowl. That increase in interest has brought some tasty looking betting offers to our shores.

888Sport have been bringing us some fantastic football offers lately, and they’ve happily taken note of Super Bowl interest with this one. New customers can get 5/1 on San Francisco 49ers to win or 4/1 on the Kansas City Chiefs to lifts the trophy.

All you need to do is sign up using the banner below, deposit £10 using the promo code 888ODDS, and place a bet (£5 maximum) on your favoured team. All extra winnings are paid out in free bets.

This one is open to existing customers as well. All you need to do is stake a minimum of £5 on any BetYourWay market on the Super Bowl, making sure to place your bet on odds of at least 2/1. You will then be rewarded with a £5 free bet (one free bet per customer).

Redzone are synonymous with the NFL, so it’s not surprising that they’ve brought us a new offer to get our hands on ahead of the Super Bowl. New customers can sign up below, place a £10 double (each selection must be at odds of at least 7/10) and you will be rewarded with a £10 free bet to be used on another double!

The AFC champion Chiefs come into this one with a 14-4 straight up record and a 13-5 record ATS. Coming from the AFC West, the Chiefs didn’t have much competition within their division but they were able to pick up some tough regular season wins against the Ravens, Patriots, and Vikings on their way to their 12-4 regular season record. Kansas City is led by their incredible offense and the reigning MVP, quarterback Patrick Mahomes.

Although Mahomes missed some time this year due to injury, the third year QB was still able to complete 65.9% of his passes for over 4000 yards and 26 TDs. His two main receiving weapons, TE Travis Kelce and WR Tyreek Hill, combined to account for 12 of those touchdowns and almost 2100 of the yards. HC Andy Reid has solidified himself as one of the best playcallers in the league and a sure bet for the Hall of Fame, but the 21-year head coach is still looking for the one accolade that has eluded him: a Super Bowl victory. 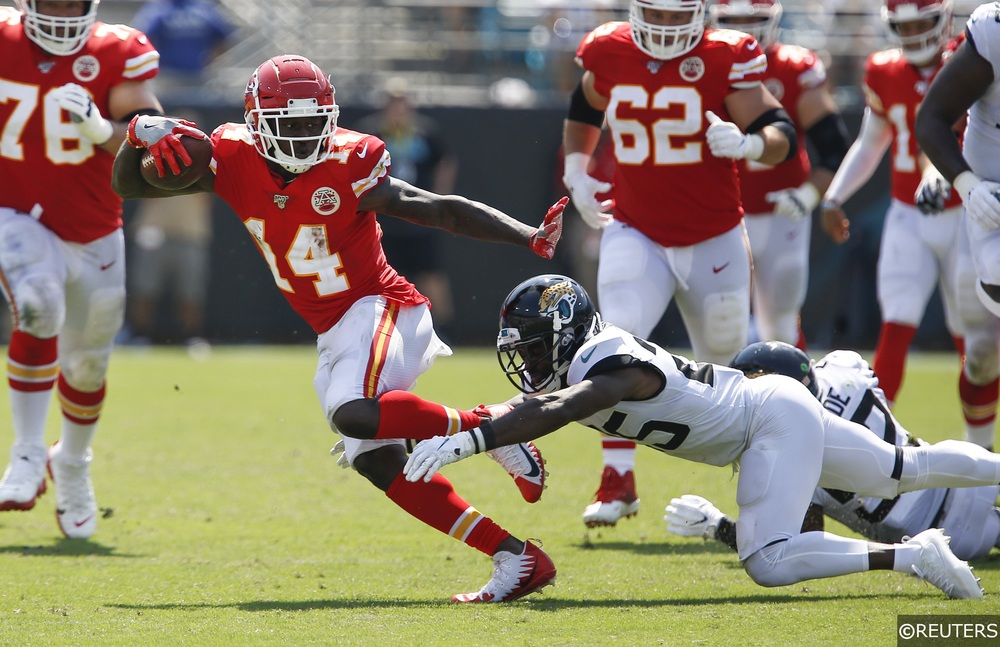 The 49ers have provided the blueprint for how to go from one of the worst teams to a Super Bowl contender in just a couple of years. GM Jon Lynch has constructed this team masterfully, committing to establishing a sturdy base in the trenches on both side of the line and picking up speedy playmakers who are great in space. This reconstruction took a couple of years, but it certainly helped as the 49ers ended up with the #1 seed in the NFC thanks to their 13-3 regular season record.

HC Kyle Shanahan has emerged as one of the best playcallers in the league because of his creativity and unpredictability and its led his offense to an 8th overall weighted efficiency ranking. San Francisco is built on the ground with their trio of running backs, a trio that helped the 49ers grab the 2nd most rushing yards in the league. But don’t underrate this passing attack, as Garoppolo’s play-action passing and deep ball accuracy have been crucial in the 49ers’ success this year. On the other side of the ball, the Niners line up what many consider to be the best pass rush in football, led by DE Nick Bosa. They play predominately zone defense so DC Robert Saleh relies on his defensive line to generate pressure to keep their suspect secondary out of trouble. 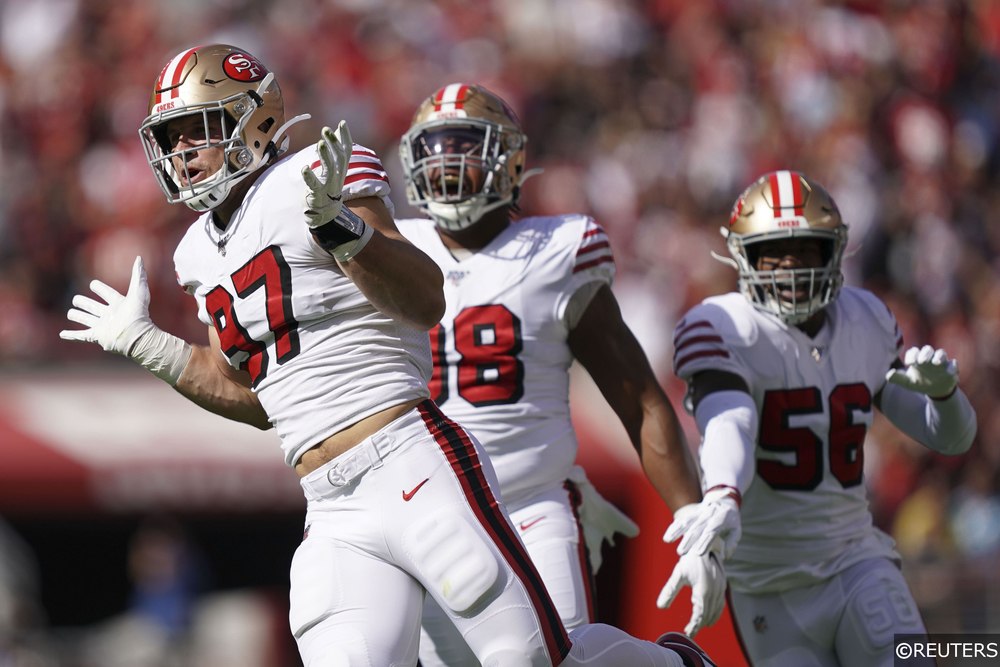 Who Are the Favourites?

See below for our complete analysis of Super Bowl LIV, where we break down each side’s gameplan and dive into some advanced metrics and analytics. We’re sure you won’t find a more comprehensive and analytical preview anywhere else, so make sure you give it a read so you can sound like the smartest person at your Super Bowl party!

In short, we think the 49ers’ offense has been underrated and we like the matchup they have against a really poor Chiefs’ run defense. San Francisco will keep the Chiefs’ defense off-balanced all game long and we think this will translate into plenty of points for the NFC Champions.

But on the other side, we also think the Chiefs’ offense will have success with their incredible aerial attack against a very overrated 49ers’ secondary. The game will come down to which defense gets a stop first, and we think one side is slightly more capable than the other. Check out who we think will lift in the Lombardi Trophy in our in depth Super Bowl predictions article.