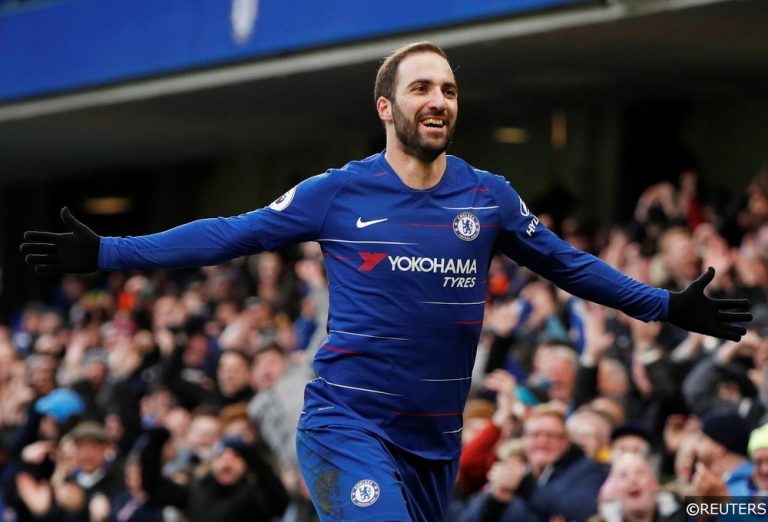 The January transfer window does not quite hold that same excitement the summer window does as loan signings are popular and there is rarely a big money move. However the winter can be equally as important in terms of ensuring the end of season goals are achieved. Weaknesses in the side are addressed are often players that are brought in have instant impacts, something we saw on show this weekend!

New Man At The Bridge

Probably the biggest Premier League signing this window came at stamford bridge where Gonzalo Higuain was reunited with his old coach Maurizio Sarri. Chelsea had been lacking that focal point at the top of their attack, having to play Eden Hazard in the false 9 role which proved in-affective. The argentine is a proven goalscorer at the highest level and looks to have fitted that gap up top perfectly.

After a slow start in Chelsea’s midweek thrashing down at Bournemouth, Sarri opted to start his new number 9 saturday afternoon. An easier test in the visit of strugglers huddersfield proved the perfect opportunity to settle those first goal jitters. Higuain opened his account early doors and added a second to his Chelsea CV with a lovely strike in the second half contributed to a routine win for Chelsea. It was no doubt that they were faced with an easier test and a trip to the Etihad next weekend will prove more difficult, but the addition of Higuain and the presence he brings looks to be one Chelsea needed.

Chelsea are still fighting on 3 fronts for silverware this campaign and the addition of Gonzalo will bring not only goals but well needed rest for other members of the squad. The EFL Cup, FA Cup, Europa League and the ongoing battle for a top 4 spot will mean rotation is necessary and having this man in the squad may prove vital in securing success this season.

Chelsea are currently favourites for the Europa League and can be found at 4/1 to win with bet365 and the addition of Higuain had no doubt boosted their chances. The top 4 also looks a lot more likely with the arrival of Higuain and they can be found at 8/11 to secure this spot above the Gunners and Ole’s Manchester United.

With Liverpool being knocked out of the FA Cup odds of 4/1 appear good value for Chelsea to lift the trophy and an EFL Cup final awaits in which the addition of the argentine will no doubt boost their chances. You can also check out our FA Cup outright previews here.

A shock last minute deal was put into place to bring Batshuayi to Crystal Palace on loan from Chelsea. The BatsMan had an impressive loan spell at Dortmund last season scoring 7 goals in 10 appearances but has been less clinical this season scoring just 1 in 15 at Valencia.

Batshuayi has struggled for goals in the Premier league but palace will look to him to lead their attacking line as Christian Benteke has only managed 3 in his last 37 appearances, not good enough at the highest level.

Batshuayi made a cameo appearance off the bench today and played a vital role in Palace’s second against Fulham on Saturday afternoon. A sharp turn and strike in the box was saved by Rico but only to be turned in by Schlupp to wrap the game up for Palace. Palace look to be safe from relegation but if you fancy a big punt, can be found at 20/1 to face the drop with Betvictor.

However with Batshuayi’s quality and impact appearance off the bench today, better value may be found in his goal scoring. He can be found at 10/11 to score 4 or more in the remaining 13 games of the season. He is at 3/1 to score 6+ but if you fancy him to recreate his form at Dortmund, he is at 50/1 to score 10+ during the rest of the campaign.

Peter Crouch has made a surprise move back to the Premier League and has received a warm welcome from the Burnley fans!

Everyone is so friendly in burnley. Very thoughtful https://t.co/vrjYgfuFhE

The man famous for his robot celebration and off pitch humour has joined Burnley as part of a deal that saw Sam Vokes move the other way. Crouch, one of only a selection of players that have scored over 100 Premier League goals, will more than likely be a utility player for Sean Dyche but it’s great to see the big man back in the Premier League.

Off the bench his aerial threat will always cause problems for defenders and his presence on the pitch today helped the Clarets rescue a draw against fellow strugglers Southampton, winning the penalty which Ashley Barnes dispatched with some aplomb.

Crouch has been brought in to do a job at Burnley and their main focus is survival at this stage of the season. It hasn’t been Burnley’s best Premier League season so Dyche will look to call on Crouch’s experience, probably more than his goal scoring powers at this stage in his career, in order to steer clear of the drop. Burnley can be found at 2/1 to be relegated with Betfair as they sit only 2 points clear of the drop zone but it will be hoped this gap is extended now Crouch has joined the set up.

A few days before Newcastle were narrowly beaten by Spurs at Wembley, they finally broke their club record signing by bringing Miguel Almiron from Atlanta United for £24 million. It is clear Newcastle have struggled this season and goal scoring has been their main downfall. 21 goals in 25 games is much less than what will be expected from the Toon faithful. An exceptional win against City should not shadow the danger Newcastle face.

Benitez obviously has faith in his new man to spend a club record fee on him but he shouldn’t be the only one excited by his arrival. Almiron managed 18 assists in 2018 something I’m sure Solomon Rondon will be thrilled with as more opportunities will be coming his way. Almiron bagged another 12 for himself, meaning he nearly contributed to a goal a game in the MLS form Newcastle need him to bring to the remainder of this season.

If this doesn’t excite the Newcastle fans i don’t know what will as this appears to be exactly what they need at this difficult stage of the season. They will be hoping he can follow in the footsteps of Higuain and Batshuayi who have made an instant impact.

Let us know on Twitter which of these you think will have the biggest impact of the second half of this season in the comments!