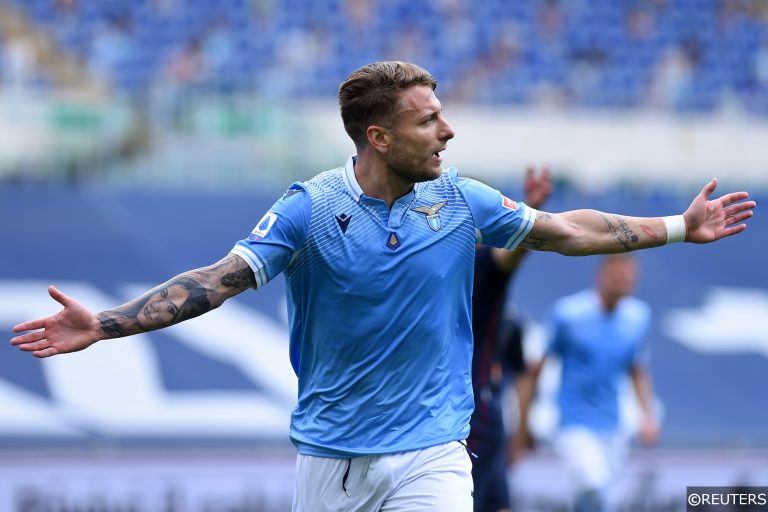 Variety is definitely the spice of life, and you can add an extra sprinkling of excitement to your punting by expanding your horizons a little.

There are dozens of divisions across Europe delivering high-octane action by the bucketful every weekend and dipping your toe into unfamiliar leagues around the continent can be tons of fun.

With that in mind, it’s time once again for The Perfect 10 – our new weekly football accumulator featuring 10 games from 10 different leagues combined into one HUGE acca!

Below you can see our set of selection from this week’s Perfect 10 – and remember – you can find loads more free betting tips for the weekend’s fixtures over on our match predictions page!

Bologna vs Lazio (Italy Serie A)

Lazio were humbled by Bayern Munich in midweek, though their domestic form has been superb. The Biancocelesti have won seven of their last eight Serie A fixtures, and another victory looks possible against Bolgona, who haven’t beaten their visitors in 15 previous attempts.

Red-hot Sevilla have won an incredible 10 of their last 11 assignments in all competitions, including a fine 2-0 Copa del Rey victory over Barcelona earlier this month. Barca have been blowing hot and cold since, and they could be in for another tough afternoon at the Ramon Sanchez Pizjuan.

Pacos Ferreira have been a potent force on the road of late, winning three of their last four league fixtures on their travels, and they should prove tricky visitors again for a Santa Clara team that has won just once in eight attempts on their own patch.

Bolton are climbing the League Two table at a rate of knots following a run of four straight wins and Wanderers can maintain their vertical charge with a victory over relegation candidates Barrow. The Bluebirds have lost more matches on the road in England’s fourth tier than any other club this term.

Ankaragucu hold the Super Lig’s worst away record this season and the relegation candidates were beaten in eight of their 12 away trips overall this term, winning only once. With three victories from their last five games, Hatayspor are in good form and they can harness home advantage against the league’s worst travellers.

Hibernian have won four games in a row as they aim to make third spot their own behind Scotland’s big two, and they can lengthen their streak at Motherwell’s expense on Saturday. The Well have only won once in five matches, and they were soundly beaten 3-0 at home by Hibs when the teams last faced off in December.

Bochum are embroiled in a four-way tussle for the title this season and they can strengthen their cause on Saturday with a win at home to bottom club Wurzburger. Kickers tasted defeat in all but one of their 11 away league games this term, and they should struggle to contain their silverware hungry hosts.

Table topping Troyes have their superb home form to thank for their lofty league position, and having won 10 and drawn three of their 13 games at the Stade de l’Aube, they look favourites to secure another positive result against an inconsistent Ajaccio side hovering in the bottom half.

A fine run of five wins in six games has launched Wolfsburg among the chasing pack behind Bayern Munich near the summit of the Bundesliga, and they can keep their surge moving forward with a win at home to Hertha Berlin. Die Alte Dame have lost five of their last six fixtures, and they are sinking like a stone.

League leaders Mallorca have been untouchable away from home this season, winning eight and drawing the other four of their matches on the road overall. The away day specialists beat Logrones 4-0 when the teams last squared off before Christmas, and they can complete the double over their relegation-threatened hosts on Saturday.

You can add the Perfect 10 to your betslip by clicking the banner below!