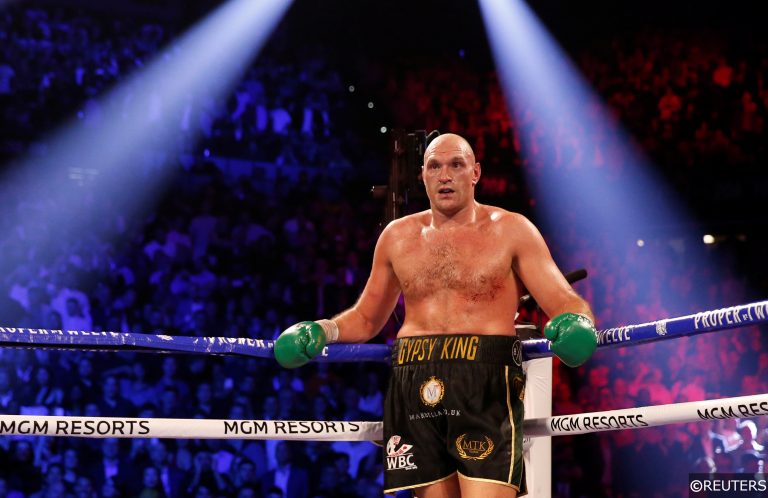 Tyson Fury and Deontay Wilder go toe-to-toe for the third time this weekend as they pair meet in Las Vegas to compete for the WBC belt Fury took off Wilder in their last bout.

This is the second huge heavyweight bout in the last few weeks and top tipster Gareth Freeman is back with his predictions after correctly tipping underdog Oleksandr Usyk to beat Anthony Joshua in September.

Where to watch Fury vs Wilder

Heavyweight boxing returns to the scene of last year’s rematch between Tyson Fury and Deontay Wilder as they face off in the T-Mobile Arena in Las Vegas on Saturday night.

Ring walks for the main event aren’t expected until at least 4am BST and the whole event can be watched on BT Sport Box Office for £24.95.

Defending champion Fury heads into the fight as 2/7 favourite and is odds-on to win by KO/TKO or DQ.

Longshot tip – Tyson Fury to win in round 4

After their first two meetings, we should have a fair idea of what to expect when Tyson Fury and Deontay Wilder complete their trilogy in Las Vegas on Saturday night.

We know Fury is the technically superior boxer by some distance – and that he boasts the power and energy to bring an early end to proceedings too after his emphatic seventh round stoppage in the second fight.

We also know that Wilder has incredible power at his disposal and if he can land the right shot can send Fury to the canvas, as he did twice in their first fight. That contest ended in a draw as the Briton somehow managed to get back to his feet but nevertheless Wilder remains a dangerous opponent for anyone in the heavyweight division.

The last fight came to an end in the seventh round when Wilder’s corner opted to throw in the towel. The American deserves credit for pushing for this rematch, few fighters would have been so keen to do so after such a comprehensive defeat, and for refusing to give in during that second meeting – indeed he was clearly unhappy his corner had opted to concede when they did even if it was 100% the correct call.

Fury has the ability to outbox Wilder over 12 rounds but he knows how much power the American carries and I’m expecting him to adopt a similar, if not quite identical, approach to their second contest.

The WBC champion will look to establish himself as the aggressor early on and this time I think he can end the contest inside the first six rounds.

Those memories that are spurring Wilder on now may have the opposite effect when they’re both in the ring again as both Wilder and his corner will be well aware there is no way back once Fury has taken hold, and the fourth round is my pick in the individual round betting market.

Ted Cheeseman doesn’t seem to receive the credit he deserves, but the Big Cheese has shown that he has the boxing skills to match his toughness. The Bermondsey boy was hard done by when not getting the decision against Scott Fitzgerald in 2019, but since then he has beaten top-level domestic performer Sam Eggington and the previously unbeaten James Metcalf.

Troy Williamson is yet to taste defeat in 17 pro fights and he carries plenty of power. However, he has never been in with anyone near the level of the Big Cheese and he could be outclassed.

Away from Las Vegas there’s an excellent card in Liverpool. Merseyside rivals Liam Smith and Anthony Fowler headline the bill and Beefy should prove too strong. Smith has mixed it and performed with credit at world level, whereas Fowler was put in his place by domestic rival Scott Fitzgerald.

The Machine has a great workrate and will no doubt be in excellent condition for this fight. However, he is an easy target to hit and Smith has the class to expose his fellow scouser.

Two unbeaten boxers clash in the big-hitting division when Efe Ajagba and Frank Sanchez square off. Ajagba looks to carry more power, but his underwhelming performance against the limited Jonnie Rice raises questions about his ability to move through the ranks.

Sanchez has been impressive against low-level opponents and the Cuban Flash looks to have more of an all-round package. Sanchez is definitely worthy of this step-up in class and he looks value to maintain his undefeated record.

Helenius produced his best victory since his 2011 win over Dereck Chisora when stopping Adam Kownacki in four rounds last time out.

However, that was a bolt from the blue, and on the evidence of wins over Chris Arreola, Gerald Washington, Charles Martin and Artur Szpilka, the Pole should gain his revenge.

Tyson Fury to win in rounds 1-6 vs Deontay Wilder

Fury has the ability to outbox Wilder over 12 rounds but he knows how much power the American carries and I’m expecting him to adopt a similar, if not quite identical, approach to their second contest.

The WBC champion will look to establish himself as the aggressor early on and this time I think he can end the contest inside the first six rounds.