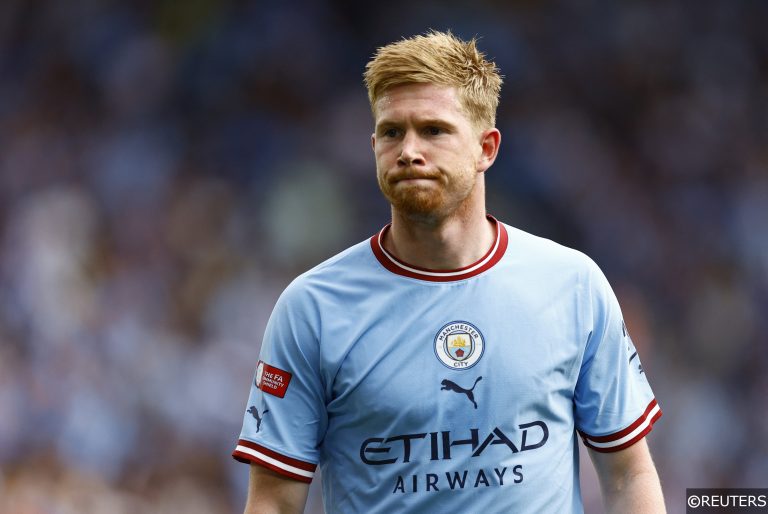 This is a busy week for Fantasy Premier League managers, with a midweek round of matches. The Gameweek 5 deadline is on Tuesday, with this midweek round stretching through to Thursday night before Gameweek 6 begins on Saturday.

With managers getting unlimited transfers from mid-November, there’s no wrong time to play your wildcard. With that in mind, we’ve combed through player data to pick out four standout stars to get on your side this week, while we have an 35/1 accumulator backing a big impact from each of the four players.

Leeds weren’t tipped to do all that well this season, but they have arguably the FPL breakout of the campaign in Rodrigo. The forward is out to become the first Leeds player to score in their first three home league games in the top-flight since Lee Chapman in 1992-93.

He’s scored four of their seven goals this term and you’d expect him to be a real threat in midweek. Leeds have a straightforward clash in prospect against Everton and the leaky Toffees’ defence should struggle to contain a forward who has already recorded 18 shot attempts in just four matches.

With Brighton on a run of four straight clean sheets, it’s worth considering their defensive options this week. However, a man capable of picking up both defensive and attacking returns for the Seagulls in Pascal Gross, who is that rare FPL gem of a midfielder played as essentially a forward.

Gross has paid back the just under 14% of FPL managers who own him with great numbers so far. He is almost half-way to his 88 point tally from the whole of last season, scoring three times and assisting once. He’s had an attacking return in three of his four appearances so far, so I like his price of 6/4 to score or assist.

Tip: Gross to score or assist

De Bruyne has three assists for the season already and his great record against promoted sides should see him add to that tally on Wednesday night.

The Belgian Kevin has been involved in 20 goals in his last 20 Premier League appearances against promoted sides, scoring seven and assisting 13. He has 11 assists across 16 home clashes with promoted sides since moving to City, while he’s recorded an assist in three of his four games this term.

Bournemouth head into this clash having conceded 16 times across their last three matches, so this is a perfect time to look to get Wolves attackers onside. Jimenez was once an FPL favourite and he could force his way into sides having impressed over the last week.

The Mexican striker found the net in the EFL Cup last week before having a strike chalked off on Sunday. He’s worth considering in this clash having found the net in all of his previous appearances against the Cherries. He’s a good attacking option moving forward at £6.9m, while he’s value to score on Wednesday at 13/10.