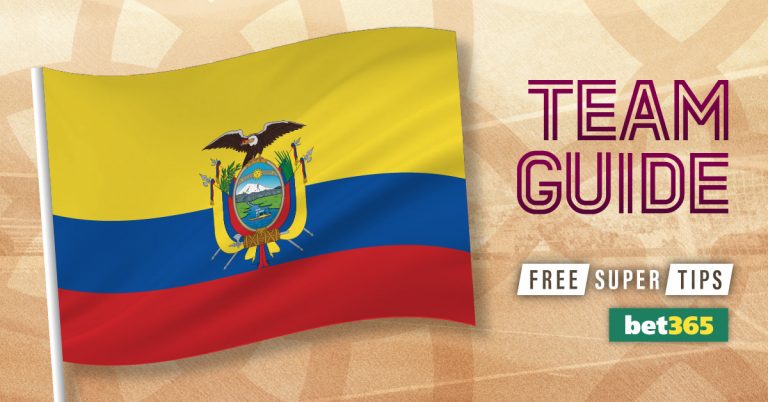 Ecuador secured automatic qualification to the 2022 World Cup in Qatar to reach the international showpiece for just the fourth time in their history.

La Tri’s last appearance came in Brazil in 2014 but after a strong qualification bid they will fancy their chances of progressing beyond the group stages, particularly having been handed what looks to be a favourable draw.

Ecuador: The story so far

Former Barcelona, Manchester United and Netherlands midfielder Jordi Cruyff was the man initially tasked with coaching Ecuador through their bid to reach Qatar after he was appointed in early 2020, but he resigned in July of that year during the height of the Covid-19 pandemic and the team didn’t play any matches, or indeed hold any training camps, during his brief time as head coach.

Instead, Arginine Gustavo Alfaro took charge and Ecuador’s qualification bid kicked off with a narrow 1-0 defeat in his homeland as an early Lionel Messi penalty proved the difference between the two sides in an empty stadium in Buenos Aires.

Of course, there is no disgrace in losing in Argentina and Ecuador made a statement in the next round of games with a 4-2 win over Uruguay, having led 4-0 with just seven minutes of normal time remaining. They followed that up with a win at high altitude in Bolivia at La Paz and then thrashed Colombia 6-1 at home for their biggest win during qualifying – although 1-1 draws with both Brazil and Argentina, both at home, are perhaps the most eye-catching results of their qualification bid.

Ultimately Ecuador finished in fourth place in CONMEBOL qualifying, behind Brazil, Argentina and Uruguay, which was good enough to secure a spot in Qatar without having to come through a play-off.

Ecuador have been drawn in Group A and have the honour of facing the host nation at the Al Bayt Stadium in Al Khor on November 20 in the opening fixture of the tournament.

The South Americans face the Netherlands in their second fixture and complete the group stages with a match-up against Senegal.

La Tri will feel they have a decent chance of emerging from the group stages but they are third favourites to win the group, behind the Netherlands and Senegal.

Ecuador are 1/1 to qualify for the knockout stages and 6/1 to finish top of the pile in Group A.

Ecuador had to wait until 2002 for their first appearance at a World Cup and a change in the CONMEBOL qualification process, the introduction of a league system, ahead of the 1998 tournament in France worked in their favour.

They exited at the group stages in Japan and South Korea but did manage a first ever World Cup win as they downed Croatia 1-0. They achieved their best result to date four years later in Germany as they progressed to the last 16, with a David Beckham free kick breaking Ecuadorian hearts as England dumped them out with a 1-0 victory.

Ecuador reached the group stages in Brazil in 2014 and then missed out on a spot in Russia in 2018, before securing a place in the World Cup for the fourth time in their history ahead of this year’s tournament.

Alfaro had a short playing career and hung up his boots in 1992 to focus on coaching. The 59-year-old took his first international job with La Tri in August 2020, a month after Cruyff departed.

The Argentine has managed a number of clubs in his homeland and has won domestic trophies with Arsenal Di Sirandi and Boca Juniors, as well as the Copa Sudamericana with the former in 2007.

Ecuador play with one central forward and alternate between a 4-3-3 and a 4-2-3-1 formation, depending on whether they are attacking or defending.

Former West Ham forward Enner Valencia, now with Fenerbahce, is Ecuador’s all-time leading scorer and captain and remains the key man in their team but they have a few other stars too, such as Michael Estrada – their top scorer during qualification – of MLS outfit DC United.

There are a few talented youngsters within the Ecuador squad and 20-year-old Bayer Leverkusen defender Piero Hincapie is worth keeping an eye on. Hincapie has already picked up 19 caps, scoring once, and he made 27 appearances for Bayer in the Bundesliga last season. In attack, Jordy Caicedo, Leonardo Campana and Djorkaeff Reasco will all be looking to make a mark on the big stage.

Ecuador not to qualify from Group A at 8/11

The feel-good factor for the host nation could spring a surprise in Ecuador’s opener against Qatar and that has the potential to put the South Americans on the back foot from the start.

They are a well-drilled outfit but Netherlands have the quality to win Group A and this year’s AFCON winners, Senegal, are a huge threat, too. Backing Ecuador to go out in the Group Stages is my preference.