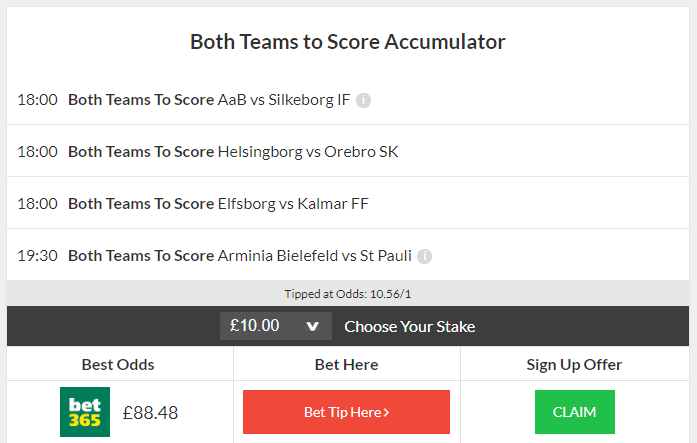 Our tipsters are rounding off July in style after landing a 10/1 Both Teams to Score Accumulator on Monday evening, just hours after pulling another 47/1 MLB Mega Accumulator  out the bag on Sunday night!

Here’s how the drama unfolded:

Our accumulator started with three games kicking off simultaneously at 6pm in Denmark and Sweden. Helsingborg v Orebro was the easiest leg of the three, with the hosts leading 1-0 within 15 minutes of us getting started. Just eight minutes later, we could add the first tick on the slip thanks to a converted penalty from Orebro’s Carlos Strandberg, who went on to bag a hat-trick.

Meanwhile, AAB had taken the lead in their game at home to Silkeborg, but this one wasn’t looking as easy. The hosts were 3-0 up at half-time, and we our only hope was that Silkeborg would keep fighting for a consolation goal. And keep fighting they did. 7 shots on goal matched the hosts’ tally and they finally broke through to make it 3-1 in the 77th minute.

By this point, strugglers Kalmar were holding on to a 1-0 lead away to Elfsborg on the third leg of our acca, something not many people were expecting. Minutes later, you were able to see why. Elfsborg found the back of the net with an equaliser in the 87th minute to keep our bet running, and Kalmar went on to lose the game 2-1 in the dying seconds.

Finally, our eyes turned to Germany. St Pauli were stubbornly holding onto a 1-0 lead against Arminia Bielefeld in their Bundesliga 2 opener… and the Germans made us sweat. Bielefeld were dominating, but not converting, and just as we thought the game was up, up stepped midfielder Manuel Prietl to score in the 90th minute – his first goal since 2016 – to land our 10/1 both teams to score bet – get in!!!

Be sure to bookmark our Free Football Tips page in order to be ready for our next winner!

As always, here are some of the betslips that were sent in to us from our Twitter followers:

Elsfborg and Arminia scoring at the last minute. That was not easy to get this beauty in 👌 pic.twitter.com/yYHrjjH5QL