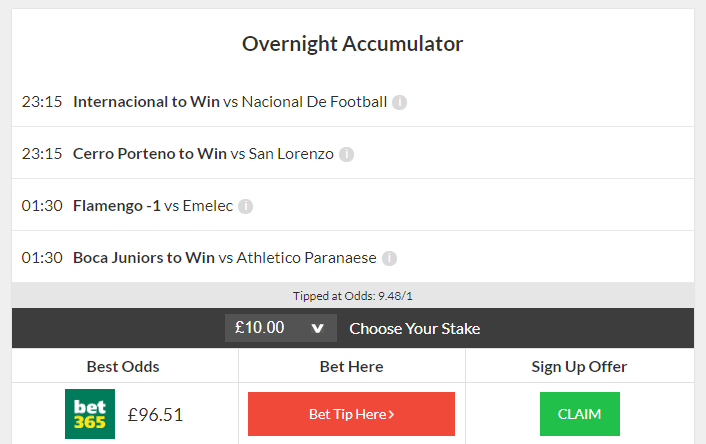 Our tipsters rounded off July in style after landing an 11/1 Overnight Accumulator on Wednesday night, just a few days after pulling 10/1 Both Teams to Score and 47/1 MLB Mega Accumulator winners out the bag!

Here’s how the drama unfolded:

LOVE WAKING UP TO A OVERNIGHT WINNER!!! 😍

Our accumulator started with two games kicking off simultaneously at 11:15pm in the Copa Libertadores. Internacional vs Nacional was the easier leg of the two, with the hosts leading 1-0 within 16 minutes of us getting started. Internacional held that thin lead comfortably until the 94th minute…  where Paolo Guerrero put them 2-0 up – one down!

Meanwhile, Cerro Porteno weren’t having it as straight forward. They found themselves trailing 1-0 after an 18th minute penalty was awarded to San Lorenzo. Fortunately for us, tensions were eased as Porteno were given a penalty of their own in the 56th minute and not long after substitute Oscar Ruiz put them 2-1 ahead.

On our third leg, we were having a bit of deja vu. Another early penalty – this time awarded in our favour – saw our next selection Flamengo take a quick lead, but we needed them to win by at least two goals or more having backed them with a ‘-1 handicap. Step up Gabriel Barbosa, who became the hero of the game by scoring a brace to put them 2-0 up less than 10 minutes later… just one more leg to go!

Finally, our eyes turned to Boca Juniors vs Athletico Paranaese. This game was more of a slow burner. 0-0 at half-time had us watching attentively… and we didn’t have to wait long in the second half. Boca were dominating everything but possession and managed to finally find a way through in the 57th minute thanks to a goal from Ramon Abila. Athletico didn’t react with much of a threat and the hosts saw it out to land our 11/1 overnight bet – get in!!!

Be sure to bookmark our Free Football Tips page in order to be ready for our next winner!

As always, here are some of the betslips that were sent into us from our Twitter followers:

Boom nice we lift on a Thursday cheers pic.twitter.com/OStqCGYjsV