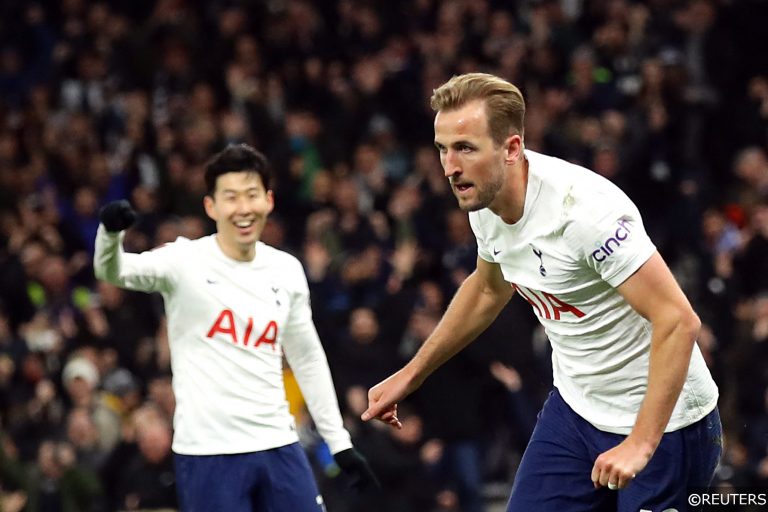 With a huge double-header of EFL action and two crucial FA Cup semi-finals it’s easy to forget there’s still Premier League football going on, but we haven’t forgotten and we’ve delved into the cards and corners betting markets to bring you a tasty selection of tips.

There are four top-flight fixtures on Saturday starting with Spurs vs Brighton at lunchtime and we’ve got a tip for each one of them which, when combined, add up to a tempting 13/1 Premier League cards & corners accumulator!

Brighton’s key midfielder Yves Bissouma sits on top of the cards table this season, having received nine bookings. Defender Joel Veltman has also given away an average of 1.1 fouls per game, and will have to deal with an in-form Son and Kane on Saturday, who are fouled a combined 2.9 times per game on average in the Premier League.

Tottenham have drawn the fifth-most cards in the league so far this season, while Brighton have received the sixth-most with 1.94 per game.

Referee Craig Pawson has given an average of 4.14 yellow cards per game this season, and with Spurs fighting hard for fourth place, there are likely to be a lot on Saturday.

Tip: Both teams to receive 2+ cards

Norwich have conceded a league-high 220 corners this season averaging 7.40 per game away from home, and have only won 50 corners on the road. Manchester United, meanwhile, have won the seventh-most corners in the league this season, and that number can only grow on Saturday.

Manchester United will also be looking to bounce back from last week’s loss, and the pressure will be on them to attack against a weaker side, which often results in more corners in a game, and a heavy corner handicap appeals here.

Southampton’s Oriol Romeu averages 1.60 fouls in home games this season, and has been booked eight times. His likely midfield opponent on Saturday, Granit Xhaka, has received seven yellows in the league and always seems to find his way into the referee’s book.

The Saint’s pressing style has them eighth in the cards table, with an average of 1.87 per game.

On top of this, referee Peter Bankes has given an average of 4.70 yellow cards per game, the highest of any referee who has officiated ten or more games this season.

With both sides playing direct and defensively-sound systems, which tend not to earn their sides an abundance of corners, a prediction for the game to have under 10 corners looks likely.