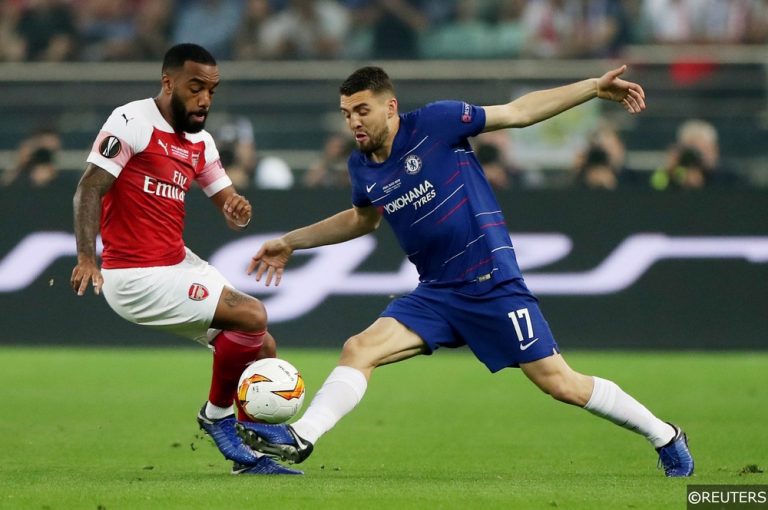 The Champions League continues on Wednesday and with it comes the chance to look at the various player markets on offer.

We’ve already put together a bet builder tip for Benfica’s home game against Barcelona, and below we’ve got a huge 222/1 four-fold covering four matches. You can see out player picks and back our accumulator below.

Betting Tip: Joao Mario to have one or more shots on target

Benfica’s Joao Mario isn’t necessarily the most forward thinking of midfielders but he is averaging a solid 0.7 shots on target per-game after six games in the Portuguese top flight from 1.2 attempts.

Mario is yet to try his luck in the Champions League but Benfica’s one game in this tournament so far was away from home. In Lisbon he is a bit more willing to shoot, averaging 1.3 attempts per-game in Portugal’s top tier this season and he may well find himself in a shooting position against Barcelona.

Betting Tip: Etienne Capoue to be shown a card

We’re expecting a hard fought affair when Manchester United face off with Villarreal on Wednesday for a rematch of last season’s Europa League final. This game could well turn into a battle, and one man who isn’t afraid to get stuck in is Villarreal midfielder Etienne Capoue.

The Frenchman has three booking in seven games this season and picked up a yellow card in Villarreal’s Champions League opener against Atalanta. The 33-year-old is averaging 2.0 fouls per-game in La Liga and 3.0 in Europe, despite playing for just 60 minutes against La Dea, and stands out as a candidate for a card at Old Trafford.

Salzburg’s Swiss starlet Noah Okafor has hit some form of late with three goals in total in his last two games. The 21-year-old has four in his last five games in total and appears to have cemented a starting spot after having to settle for a role on the bench earlier in the season.

We’re expecting Salzburg to get the better of Lille on Wednesday, and in-form Okafor looks a good option for an anytime effort against the French champions.

There may not be too many goals when Juventus and Chelsea meet, but at a big price an anytime assist from Chelsea midfielder Mateo Kovacic does have a chance. Kovacic may not immediately jump out as a creative force but he has managed three assists in six Premier League games this season so he could provide that spark needed when the Blues head to Turin.

In The Mixer: Experts discuss the Premier League title race