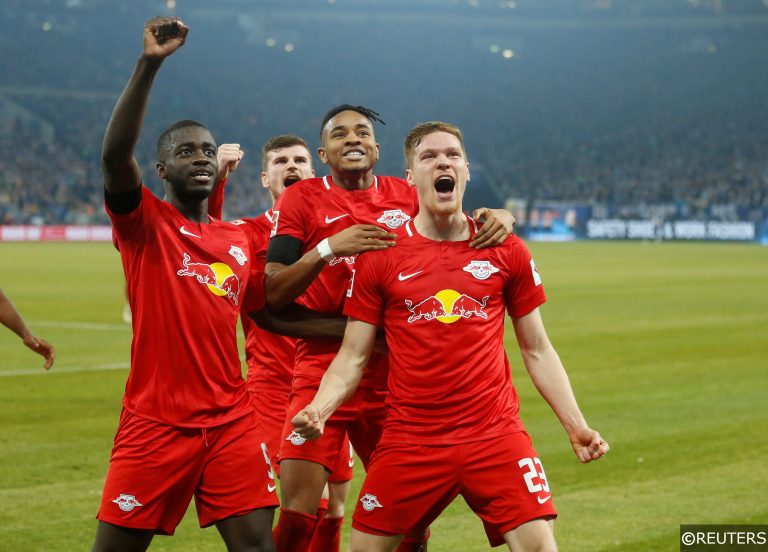 Bundesliga matchday 29 concludes on Monday night as top four hopefuls RB Leipzig take on an out-of-form Cologne side at the RheinEnergieStadion.

The Billy Goats come into the clash as clear underdogs having failed to win any of their three matches since the Bundesliga restart, while RB Leipzig have collected five points from a possible nine but have seen their slim hopes of a Bundesliga title all but disappear.

In any case, both teams have plenty to play for on Monday night. Cologne are inching closer to the relegation battle with every poor result and now sit just seven points above the relegation playoff spot.

We take a look at the key individual battles that could decide the tie, and if you’re looking for more analysis check out our Cologne vs RB Leipzig predictions here.

In-demand striker Timo Werner has been at the spearhead of everything good about RB Leipzig this season, notching 24 Bundesliga goals in just 28 appearances and second only to Robert Lewandowski in the scoring charts.

The 24-year-old ended his miniature goal drought in emphatic fashion last weekend as they thumped three past Mainz in their 5-0 battering, and he’ll be be coming up against one of Cologne’s standout performers this season.

Central defender Toni Leistner tops the average rating charts for Cologne and has been integral at the back for them since his January move to Germany.  He has averaged 3.7 interceptions and 5.7 clearances per match since his arrival, both of which top the charts for any Cologne player to have made more than five appearances.

However, with seven goals conceded in their last three matches, it’s clear that the Billy Goats’ overall defensive setup isn’t working at the moment.

27-year-old Jhon Cordoba is expected to occupy the central striker berth for the hosts on Monday, and that pits him against one of the rising central defensive talents in world football.

Dayot Upamecano is fast becoming the hottest property in the defensive market, with the 21-year-old showing remarkable strength, pace, defensive nouse and even a fair amount of talent on the ball.

He has averaged 2.2 tackles, 1.6 interceptions and 3.2 clearances per game this season and is one of the main reasons that RB Leipzig hold the second best defensive record in the Bundesliga.

Cordoba may be Cologne’s leading scorer with 11 goals this season, but with only one of these goals coming against current top four teams we think he could be outclassed against Upamecano.

RB Leipzig may be the most disliked club in Germany’s top flight, but there is no denying the talent in their youthful squad. Christopher Nkunku, aged 22, is one of the many shining lights in this well-drilled team.

The young French midfielder has racked up 13 Bundesliga assists this season – only Thomas Muller and Jadon Sancho have managed more –  and chipped in with four goals as well. His eye for a pass, combined with Timo Werner’s explosive ability to break the defensive lines, makes Nkunku a major threat to Cologne.

Jonas Hector is the man likely tasked with limiting Nkunku’s influence on the game. The 30-year-old German has averaged 2.6 tackles and 1.6 interceptions per game this season but, in his eagerness to win the ball back, he has also racked up seven yellow cards.

Nkunku hasn’t been in his finest form since the return to action though, only providing one assist in his 218 minutes of playtime. Still, he has the quality to give Hector a really tough evening.

Cologne are expected to provide very little in the way of attacking threat on Monday, and that’s largely due to RB Leipzig’s fantastic defence. This extends to their full backs as well, especially since none of their midfielders are particularly defensive minded.

Konrad Laimer is proving among the best in the business when it comes to defending the flanks, averaging 3.4 tackles per game in between his own marauding runs up the right. The 23-year-old Austrian will be tasked with keeping Cologne’s flying winger Ismail Jakobs under wraps.

The young left winger loves to hug the left side of the park, putting in 3.9 crosses per game on average and generally making life hard for the opposition right back. That being said, Laimer should be well up to the task given his performances this season.

While Christopher Nkunku may take all the assisting limelight for RB Leipzig, the Marcel Sabitzer continues to show his threat across the board. He has contributed 16 goals and eight assists in all competitions this season, chipping in with 1.9 key passes per game – second only to Nkunku.

Not only that, but his generally deeper lying role means he tends to see a lot more of the ball, completing almost twice as many overall passes as his French teammate. This makes him just as much of a threat, and the task of keeping him quiet will fall to Jonas Hector’s partner in crime – Ellyes Skhiri.

The 25-year-old averages 2.2 tackles, 2.2 interceptions and 1.2 clearances per game from his defensive midfield berth, but his performances since the return to action have been mixed. Sabitzer, meanwhile, has scored one and assisted one since the hiatus ended and could have the beating of his man on Monday.