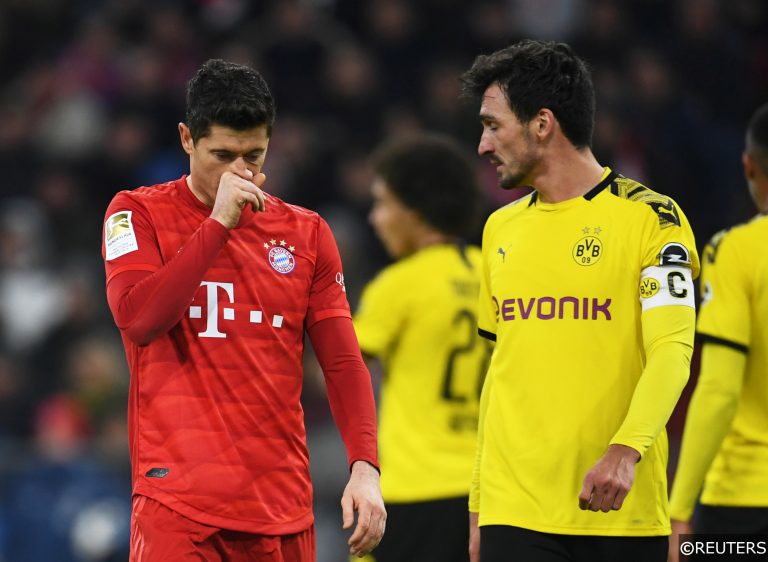 The 2019/20 Bundesliga made a welcome return on May 16, and while the German top flight’s reputation for producing unpredictable results is well established, one particular trend has been catching the eye and making headlines since the re-start.

In the first round of Bundesliga fixtures played post-postponement, just one of the weekend’s nine home teams took maximum points (Borussia Dortmund 4-0 Schalke 04), immediately prompting suggestions that playing “ghost games” in empty stadiums was having an impact on outcomes.

Following the second set of games after the hiatus, those suggestions were solidified into working theories, when Hertha Berlin’s 4-0 battering of city rivals Union in the weekend’s first game turned out to be one of just two home victories from another clutch of nine Bundesliga matches, alongside Bayern Munich’s emphatic 5-1 evisceration of Frankfurt.

Just days later in the league’s mid-week programme, Tuesday’s quartet of contests failed to return a single home win, while Wednesday’s tally of two home victories from five did little to beat back the belief that something strange was going on.

Remember – we’ll be covering all the latest German football action with betting tips and match previews on our  Bundesliga predictions page.

No fans = no points? 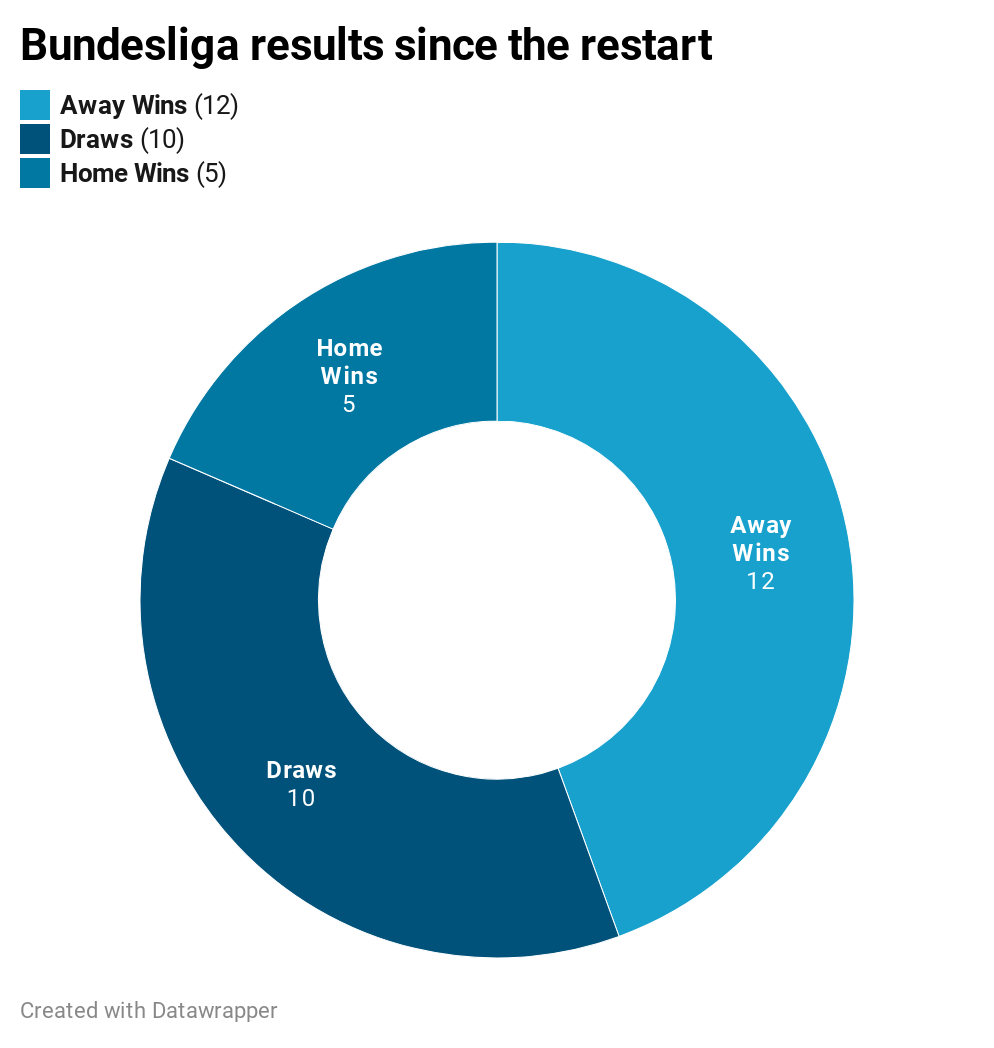 With COVID-19 regulations, directives and guidelines combining to keep supporters out of stadia across the country, all of the Bundesliga’s games have been played against the eeriest of backdrops, where the only noise has been created by the coaches and players’ echoey instructions bouncing back and forth between the empty plastic seats.

The absence of atmosphere makes the whole event feel a little alien, and the division’s results so far make a compelling case to indicate that home teams are struggling to adapt.

Since the Bundesliga’s comeback, just five out of 27 home teams have won their respective fixtures on their own patch. That works out at a remarkably low 18.5% home team win rate since German fußball’s reappearance.

That percentage falls well below what has been a pretty consistent pattern of home victories over the past eight Bundesliga campaigns, where the 2011/12’s 42% home win figure represents the lowest and 2016/17’s 49% the highest total during that period.

With the win rate coming in at well under half the average since the Bundesliga’s no-supporters policy was introduced, home advantage seems, on the surface at least, to be rapidly diminishing. 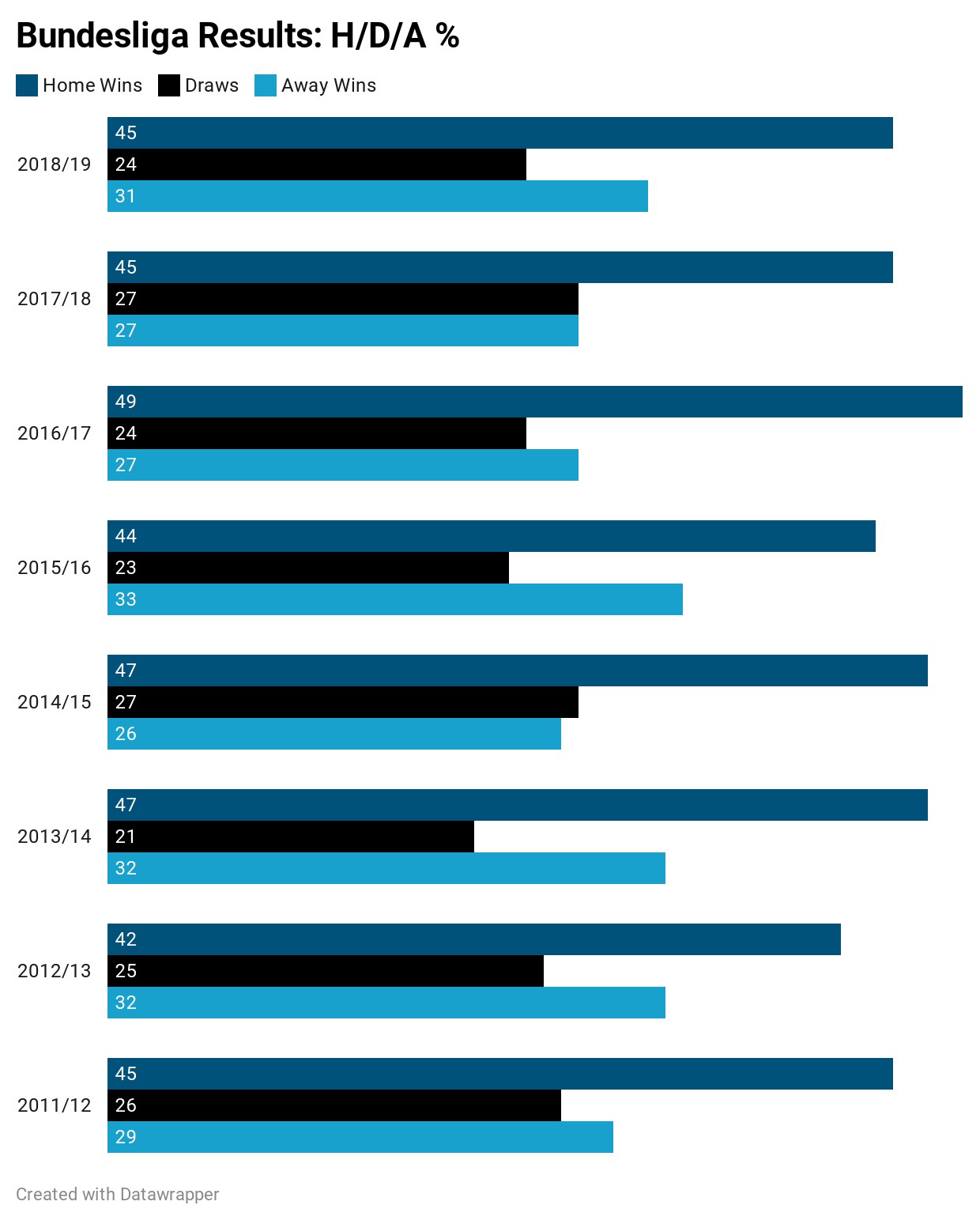 Any theories about decreased home advantage could of course, be challenged based on the fact that we are currently dealing with a relatively small sample size, though a direct comparison with last season’s results from the same matches (where applicable) also supports thinking that something abnormal is happening.

With fixtures involving newly promoted clubs left out, the comparison between last season’s and this season’s results don’t exactly line up like for like across all 27 matches, though we do have a decent 18-game set to analyze.

In the corresponding fixtures last term, seven or 38% of the 18 home teams involved took maximum points from their respective matches – a figure that’s much more in keeping with the entire campaign figures we see in the section above.

However, if we switch to the other end of the results and look at the away win rate, then this season’s 44.4% isn’t quite as stark an improvement on the 38.8% away team win rate from the same fixtures in 2018/19.

Interestingly, one of the “shock” away results we’ve witnessed since the 2019/20 campaign’s restart for example, Wolfsburg’s 4-1 win at high flying Bayer Leverkusen, was almost identical to the result from the same game in 2018/19, where Die Wölfe ran out 3-1 winners at the BayArena.

Applying the data to the Bundesliga betting markets

While the temptation to start backing Bundesliga away wins across the board might seem like a good idea, the numbers suggest that double chance markets could be the best way to go.

In terms of major upsets, only Augsburg’s 3-0 win at Schalke on May 24 jumps off the page, and away sides are still coming out on top in less than half of the games played.

However, visiting teams have so far avoided defeat in 21 or 81.4% of the 27 Bundesliga fixtures contested since play resumed, and with odds still largely favourable in bookmakers’ double chance markets for the majority of German top tier games, punters could find some joy.

The matches behind closed doors and decreasing impact of home advantage phenomena will be also worth keeping an eye out for when top-flight football returns in England and Spain next month. We’ll be covering both competitions extensively on our Premier League predictions and La Liga predictions page.

5 Bundesliga goalscorers to keep an eye on this weekend