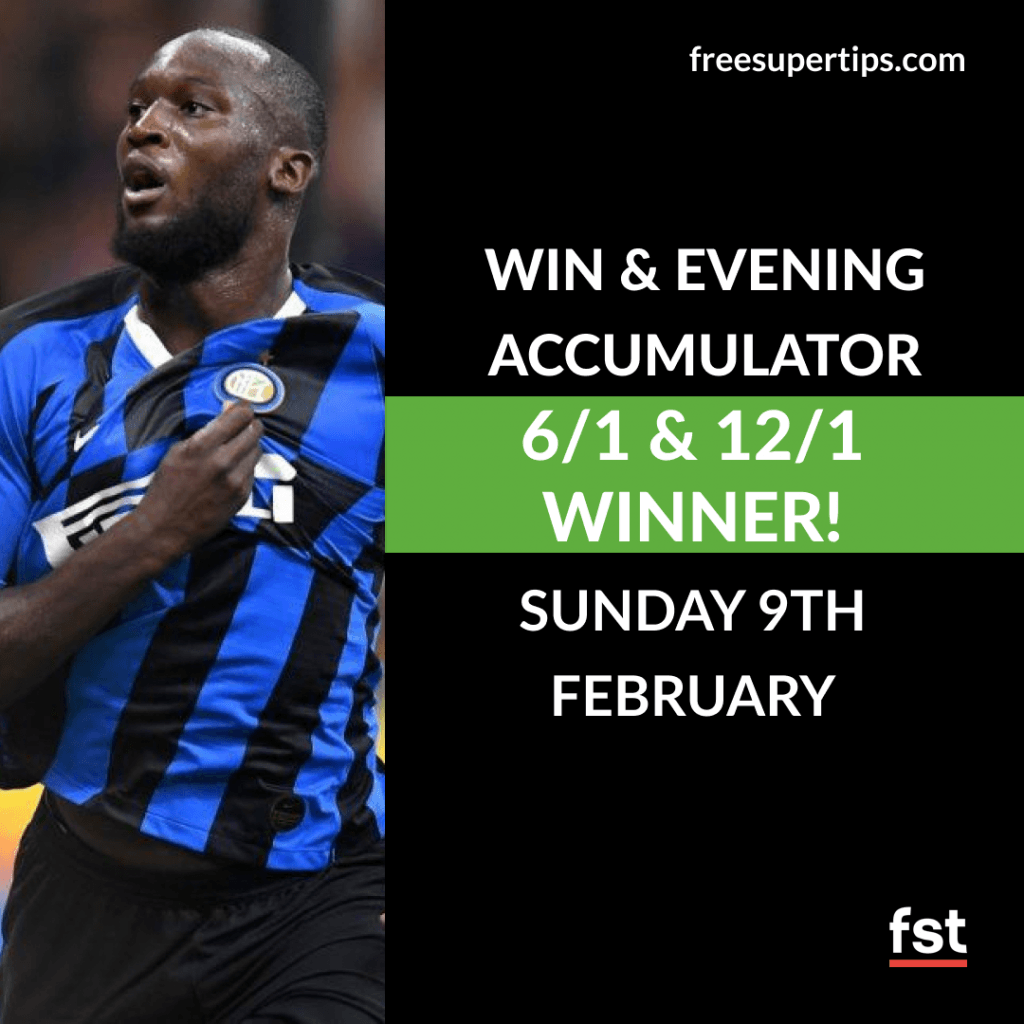 Storm Ciara may have caused a lot of havoc on Sunday causing numerous fixtures to be postponed but that did not stop the winners coming in for FST. After our analysts started the week off strongly with a 9/1 Both Teams To Score Accumulator, they pulled off a 9/1 Overnight Treble winner on Wednesday before finishing the week off with 6/1 Win Accumulator and 12/1 Evening Accumulators landing making it 4 winners this week!
Firstly let’s recap the 6/1 Win Accumulator which got the duet of winners underway.

Unfortunately due to the weather conditions on Sunday our Win Accumulator became a treble with the Gladbach vs Cologne fixture being postponed meaning that the sole Premier League fixture of the day got us underway at Bramall Lane.
Sheffield United have continued to impress in their first season back in the Premier League and they aimed to pick up another victory against strugglers Bournemouth who had only picked up 3 away victories this season. Things didn’t get off to a bright start for The Blades with the clinical Callum Wilson putting The Cherries ahead in just the 13th minute, the United veteran Billy Sharp brought things back level just before the half time whistle meaning we required a strong second half from the home side to get our Sunday underway. They were made to work for it but in the 84th-minute substitutes, Mousset and Lundstram combined to give Sheffield United to lead and deservedly the victory.
This took us to France ready for our second leg as Montpellier aimed to pour the misery onto Saint-Etienne handing them their 3rd defeat in a row. The hosts got off to a great start with top goalscorer Delort finding the back of the net once again in the 24th minute to earn his 9th goal of the season. However, their luck didn’t continue as in the 41st minute they saw themselves go down to ten men as Sambia saw a straight red card. The hosts underwent a barrage in the 2nd half with Saint-Etienne desperate to not taste defeat again however Montpellier held strong to bring home our second leg and their 9th home win of the season.
Our final leg featured the final Milan derby at the historical San Siro Stadium and things did not get underway well for the home side, at the half time whistle they trailed 2-0 and had a lot of work to do in order to produce a comeback. A quick second-half double helped their case with Brozovic and Vecino finding the net in the 51st and 53rd minute respectively. The tide of momentum had turned with those two goals and Inter now looked the favourites to find a winner and in the 70th minute, they got their goal through centre-back De Vrij. Inter Milan didn’t stop there either as Lukaku added to his goal tally for the season in the 93rd-minute securing the 6/1 Win Accumulator for us!

Our 12/1 Evening Accumulator took us to Italy, France, and Spain as we needed Inter Milan to win against AC Milan, PSG to win and Both Teams to Score against Lyon, Both Teams to Score in Real Betis vs Barcelona and Benevento to beat Cosenza. We’ve already been through the Inter leg, so we head straight to leg two of the accumulator.

Next up we headed over to the Parc des Princes, where PSG got off to a flying start as Angel Di Maria gave the hosts the lead on 22 minutes, before Kylian Mbappe made it 2-0 seven minutes before the break. An early Lyon own goal in the second half made the game seem beyond reach at 3-0, but the away side fought back, with goals from Terrier and Dembele giving Lyon a fighting chance. However PSG sealed up the game 10 minutes from time as wantaway striker Edinson Cavani netted to make it 4-2, landing our win and BTTS bet.

Next we headed over to Spain for what can be dubbed the “Quique Setien Derby”, as Barca’s new manager took on his old club. His previous employers got off to the perfect start, with Canales scoring from the penalty spot on 6 minutes, but their lead didn’t last long as De Jong equalised from a Messi assist. Nabil Fekir gave the hosts the lead for the 2nd time before the half hour mark, but once again Barcelona drew level just before half time through a second Messi assist and a Busquets finish. Messi completed his hat-trick of assists in the 2nd half as this time Lenglet found the net making it 3-2, comfortably landing our Both Teams to Score bet.

Finally we just needed Benevento to win away at Cosenza. Insigne gave the visitors the lead just after the half-hour mark, a lead which they took into the break. Cosenza created a lot of chances in the second half, but weren’t able to find the net, meaning the game ended 1-0, landing the accumulator.

Don’t worry if you missed out on last night’s winner, there’ll be plenty of other opportunities to land a winner. We strive to bring you the very best daily football betting tips from around the world, and you can follow along by bookmarking our FOOTBALL PREDICTIONS page.

Get Up To £100 In Bet Credits
Open Account Offer: Up to £100 in Bet Credits for new customers at bet365. Min deposit £5. Bet Credits available for use upon settlement of bets to value of qualifying deposit. Min odds, bet and payment method exclusions apply. Returns exclude Bet Credits stake. Time limits and T&Cs apply. 18+
Claim
Sign Up To Our Email Newsletter