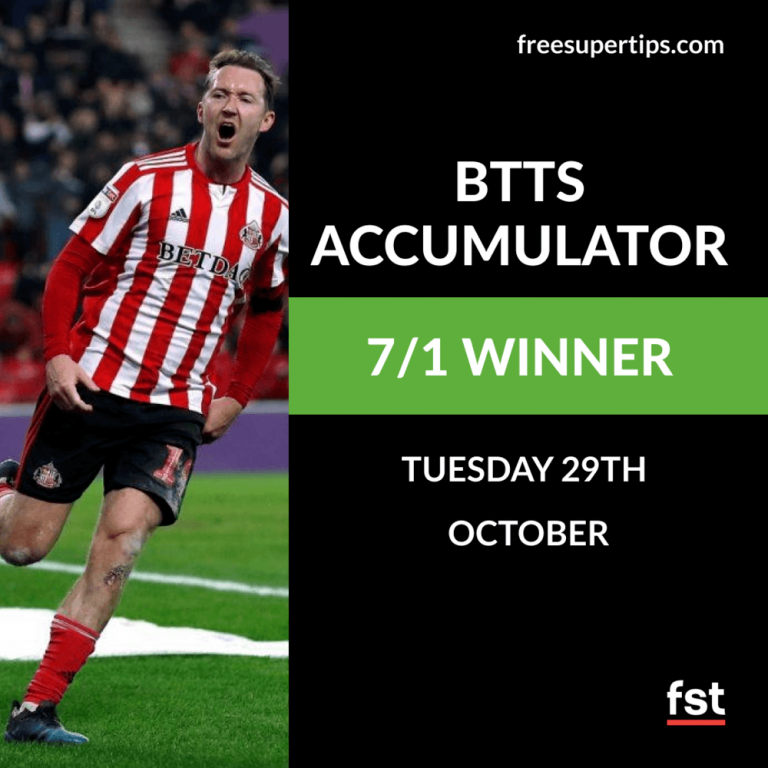 What a week we are having here at FST! After landing 96/1, 50/1 & 10/1 Accumulators on Saturday, our football analysts have followed it up with a 7/1 Both Teams To Score Accumulator on Tuesday!

7/1 BOTH TEAMS TO SCORE ACCUMULATOR LANDS!!!

OUR 4TH ACCA WINNER SINCE SATURDAY!

Every leg of our 7/1 accumulator was in the both teams to score market. That meant we needed to see goals from both the home and the away team in each game.

Leg one was in Belgium, with Kortrijk hosting AS Eupen. The visitors got off to the better start, with forward Jonathan Bolingi scoring two in the opening 30 minutes, but with Kortrijk having scored in every Division A home game in 2019, we were liking our chances to see a home goal. Fortunately, an 82nd minute own goal did the job.

Next up was the Oxford United v Sunderland game in the Carabao Cup. This was another game where we saw an early goal – forward Rob Hall put Oxford in front within 25 minutes – but we didn’t see the second until late into the final 45 minutes! We can thank Sunderland’s Marc McNulty for that one.

Finally, we needed both teams to score in two games from the Italian Serie B: Chievo v Crotone and Pisa v Salernitana. The trend continued in Italy too. Crotone and Pisa were the two sides to bag first half goals before Chievo and Salernitana finished off the business with a goal each in the final 20 minutes.