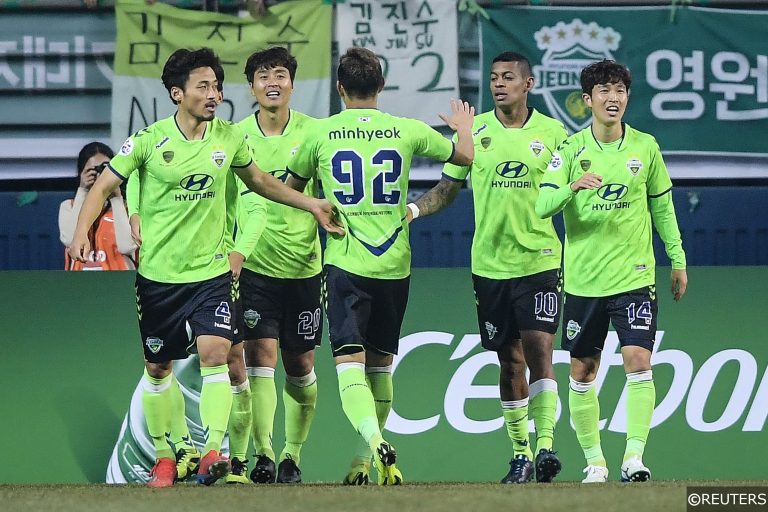 The new 2020 K League season kicks off on Friday, ending the lengthy three-month delay to the start of the competition that was originally scheduled to get under way in February.

The game in the lower half of the Korean peninsula might be shrouded in mystery for many of you, though there will be plenty of familiar names plying their trade in K League 1 this term.

From former Premier League regulars to seasoned international performers, South Korean football is dusted with enough high-profile players to hold your interest and to help fill the void left by the absence of more mainstream leagues.

Read more about some of the division’s most recognisable names below and make sure to check out our South Korea K-League predictions here.

Make sure to check out our detailed 2020 K League guide here!

The 30-year-old, who was on loan at Ulsan from Kashiwa Reysol in the Japenese J-League last year, played a key role in his team’s major, if ultimately unsuccessful title charge last term – so his decision to sign for a Jeonbuk side that pipped Ulsan to silverware caused quite a ripple in South Korea.

Many of you will remember Kim Bo-kyung from his time in England between 2012 and 2015, where he played for a spell under Old Gunnar Solskjaer with Cardiff City in the Premier League. The schemer even managed to mark his time there with a goal against Manchester United in November 2013.

Jeonbuk Motors play Suwon Bluewings on Friday, as they begin their title defence.

30-year-old left-back Yoon Suk-young will spend his third year on loan in a row in the K League from his parent Kashiwa Reysol this term, though he is best remembered for his short stay with QPR in the Premier League.

The defender played under Harry Redknapp in England’s top-flight during the 2014/15 season, making 23 appearances for Rangers overall during a campaign that eventually saw the Londoners relegated.

Yoon Suk-young endured unproductive loan stays with Doncaster and Charlton before returning to the Far East in 2017 via Brondby in Denmark.

Affectionately known in as the “Blue Dragon” in South Korea, Premier League fans should be familiar with Lee Chung-yong from the time he spent with Bolton Wanderers and Crystal Palace.

Still only 31, the midfielder played in England with distinction for the best part of a decade, and his performances for Bolton in particular earned him rave reviews and transfer links with Merseyside giants Liverpool.

Lee Chung-yong has also long been a national team fixture too, representing South Korea at both the 2010 and 2014 World Cups, collecting 89 caps overall during a glittering international career.

Lee’s move to Ulsan was a massive coup for last year’s K League 1 runners up, and his class and experience could help the South Coast outfit make the final leap to first place in 2020.

The 28-year old Australian has been country and league hopping for the majority of his career, though he did hold up in England for a couple of years between 2014 and 2016, where he played in fits and starts for West Brom and Huddersfield Town.

Davidson earned a move to the Baggies on the back of an impressive World Cup 2014 showing with Australia, though he appeared just twice for Albion in the Premier League before he was moved on to Huddersfield in the Championship.

Australian hitman Adam Taggart arrived with a bang during his first season in South Korean football in 2019, bagging a superb 20 goals in 33 league appearances during a sparkling debut year for Suwon Bluewings.

Now that the 26-year-old is fully integrated in his new surroundings, the pressure is on to increase his goal-getting output in 20202, and he should have plenty of help from his compatriot and key chance supplier, Terry Antonis.

Taggart spent a brief time with Fulham earlier in his career between 2014 and 2016, but returned to his homeland after two injury hit years at Craven Cottage where he established himself as one of the deadliest front men in the A-League.

The striker has also been making an impact at international level, scoring three times in his last four games for the Socceroos.