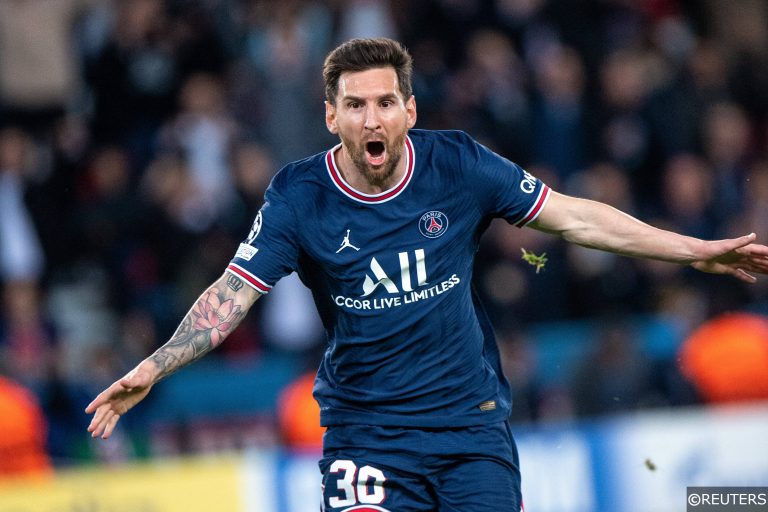 We’ve already picked out our match predictions for this week’s Champions League action, while we’ve also got the lowdown on the betting odds to qualify for the last 16. We’ve already taken a look at the player specials markets for some of Tuesday’s biggest games and now we’ve got some options for Wednesday too.

There is plenty at stake going into Wednesday’s matches in the penultimate round of fixtures and we’ve got selections from Manchester City’s meeting with Paris Saint-Germain and the crucial match-up between Atletico Madrid and AC Milan on our four-fold bet.

Our Player Specials accumulator for Wednesday comes in at 86/1 and you can back our bet and see each of our selections below.

Sporting Lisbon forward Pedro Goncalves, aka Pote, made a blistering start to the season with four goals in his first three games but he then spent a month on the sidelines with a knee injury.

Pote went five games without a goal after making his return but is back in scoring form with five in his last three appearances, including a brace against Varzim in the cup at the weekend. The Sporting man comes up against a BVB defence without the suspended Mats Hummels on Wednesday and can make his mark with a goal.

Lionel Messi scored in Paris Saint-Germain’s 2-0 win over Manchester City in the reverse fixture and can test the keeper at least twice when the pair meet again on Wednesday. Messi is averaging 3.5 shots per-game in Ligue 1 and 3.0 in the Champions League, with 1.7 of those on target. The Argentine superstar tends to up his game (if that’s even possible) against Premier League opposition and has scored 27 goals in 35 games against English opponents in Europe, with seven in as many games against City, and he can register at least two shots on target on Wednesday.

Atletico Madrid and AC Milan meet in what is essentially a knockout game in Group B on Wednesday in the Spanish capital. Belgium international Yannick Carrasco has been a key creative force for Los Colchoneros this season, and he can create a goal against the Italian giants.

Carrasco has managed an assist in each of his last two appearances for club and country. The 28-year-old has only managed three in total for Atleti this season in 17 games but arguably he should have more. The former Monaco man has created 16 chances in total, at an average of 0.94 chances created per-game, and has a pass success rate of 81%.

It has been a largely forgettable Champions League for RB leipzig and they cannot qualify for the knockout stages after picking up just one point from their first four games. However, there is one Leipzig man who has enjoyed playing in Europe this season – Christopher Nkunku has managed five goals in four Champions League games, only failing to find the back of the net in one of those matches, and he can add to his tally against Club Brugge as the German outfit chance the second prize of a Europa League spot.