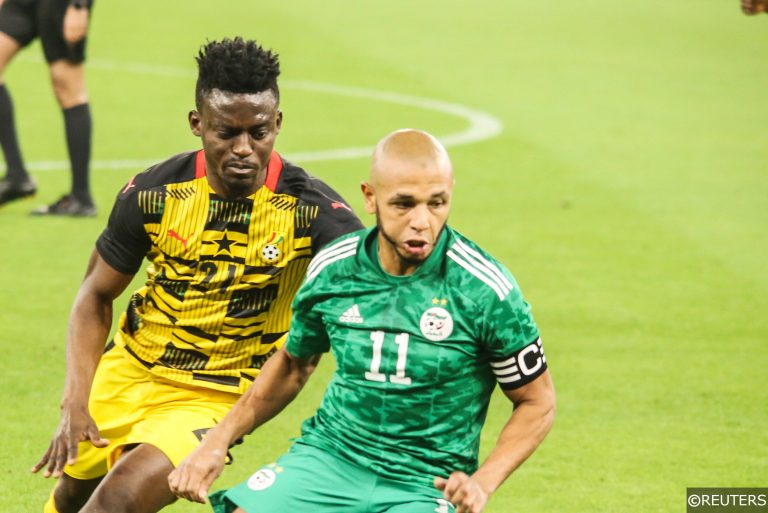 AFCON 2021 kicks off in Cameroon on Sunday and while we’ve already dived into all our AFCON 2021 outright predictions, here we’re taking a look on a group-by-group basis and tipping a winner from each of the five groups, combining into one 10/1 acca!

It’s not the most talented squad in the tournament, but it’s by far the best in Group A and they head into the tournament after winning each of their last four World Cup qualifiers, scoring nine times and conceding just once.

Burkina Faso – their main competitors for the top spot and first opponents on Sunday – are unbeaten in eight but have only won four of those and they have beaten Cameroon just once in six attempts.

Our picks for the tournament winners, Senegal have arguably the best squad in the tournament and are in good form after taking 16 points from 18 available in their recent World Cup qualifiers.

Sadio Mane, Ismaila Sarr and Keita Balde are a terrifying prospect up front and they have equally adept talents further back, with Edouard Mendy between the sticks, Kalidou Koulibaly captaining from the back and Idrissa Gueye and Nampalys Mendy in midfield.

Zimbabwe and Malawi are huge outsiders for Group B, leaving Guinea as their only competitors for the top spot. To put that into perspective, Guinea have just four players that ply their trade in a top five European league and they have won just one of their last eight games.

Morocco may be without Hakim Ziyech for this tournament but there’s a reason they are our dark horse picks this year.

They have won 12 of their last 13 games and haven’t lost a game in 90 minutes since October 2019. Wolves defender Romain Saiss will captain the team, while Achraf Hakimi, Ilias Chair, Sofyan Amrabat and the Sevilla attacking duo of Munir El Haddadi and Youssef En-Nesyri make for a formidable outfit.

Ghana, their main competition for the number one spot, have only won four of their last nine matches and lost 3-0 to Algeria in a friendly this week. They lost their last meeting with Morocco in June and North African sides have reached the final in each of the last two AFCON instalments.

Egypt are the bookies’ favourites but I suspect a certain Mohamed Salah has a lot to do with that and that leaves a good amount of value in Nigeria.

The Pharoahs may boast the Premier League trio of Mohamed Elneny, Trezequet and Mohamed Salah, but apart from that their squad really isn’t anything special and 20 of their 25-man squad ply their trade in Egypt or Saudi Arabia.

Not only that, but they come into the tournament having won none of their last four outings inside 90 minutes, while Nigeria have won four of their six World Cup qualifiers and bring a much more balanced squad to the fray, with Leon Balogun, Frank Onyeka and Kelechi Iheanacho the standout names.

It’s a straight shoot-out between Algeria and Ivory Coast in Group E and my money is going on the defending champions.

Led by Riyad Mahrez, The Greens are unbeaten since October 2019, winning 24 of these 33 games and it’s not just Mahrez they rely on. Islam Slimani is their top scorer with 38 goals in 79 caps, while Al-Sadd forward Baghdad Bounedjah has hit almost a goal every other game for the national team and Said Benrahma has been in excellent form for West Ham.

Ivory Coast are worthy challengers but they lost to Cameroon in their last match. The form of Algeria and their status as defending champions makes them worthy of their favourites tag.