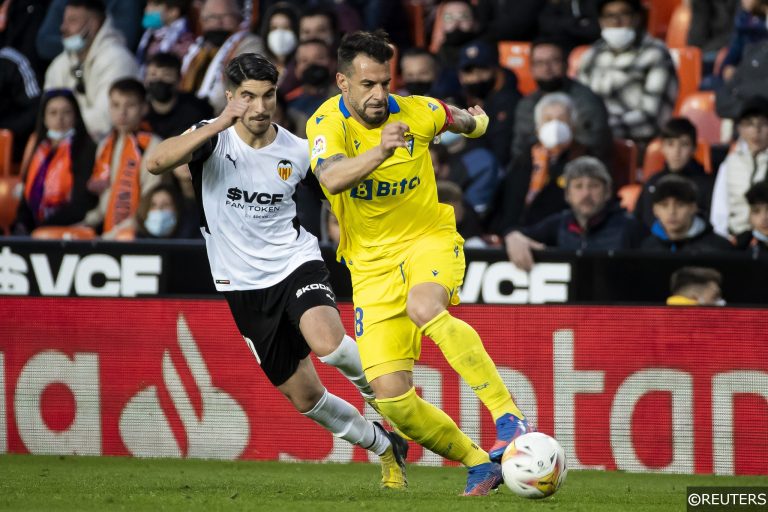 The games are coming thick and fast throughout Europe this week and Thursday sees our focus shift to Spain for a quartet of La Liga matches, including a tasty looking clash between Real Sociedad and Barcelona.

We already have tips and correct score predictions for all four of these games, but now it is time to delve into one of the more niche markets as I try to dig out the value in the shots markets.

I’ve picked out one player from each game that I fancy to give the opposition keeper a hard time, combining them into a juicy-looking 14/1 acca starting at 6pm tomorrow.

Veteran striker Jose Morales has been in blistering form over the last few weeks, scoring four times and assisting another two in his last three appearances to help his Levante side score eight goals in this short period.

He leads both the shooting and scoring charts for Levante this season and has tested the keeper six times from 13 shots over his last four appearances, registering at least one shot on target in each of those games.

Espanyol are riding the crest of a three-match winning streak in San Sebastian and they have Raul de Tomas to thank for at least some of their success.

The 27-year-old attacker has scored two goals in his last three games and has taken 11 shots in this period, hitting the target five times. He has tested the keeper twice or more in two of his last three and in five of his last ten.

Tomas and his Espanyol side come up against a Rayo Vallecano outfit that have lost six of their last seven league trips , so 11/8 looks a solid price for him to hit the target twice or more.

Sticking with the theme of veteran strikers, Cadiz’s 36-year-old Alvaro Negredo stands out as they host an Athletic Bilbao side that have lost four of their last five away games on Thursday.

The first half of the season was a difficult one for Negredo but he’s found his shooting boots since January, scoring only four times but regularly testing the keeper.

13 of his 24 shots on target this season have come in his last 12 games and he has only failed to hit the target twice in this run.

Ferran Torres only arrived at Barcelona in January but the former Manchester City attacker has had a huge impact on the club, scoring four and assisting three in his 11 appearances.

In fact, despite his short time at the club, Torres is behind only Memphis Depay in Barcelona’s shot table and only the Dutchman and fellow new recruit Pierre-Emerick Aubameyang have registered more shots on target.

Overall, the Spain international has averaged 1.4 shots on target per 90 minutes since joining the Catalan club and has hit the target at least twice in four of his last six club appearances.