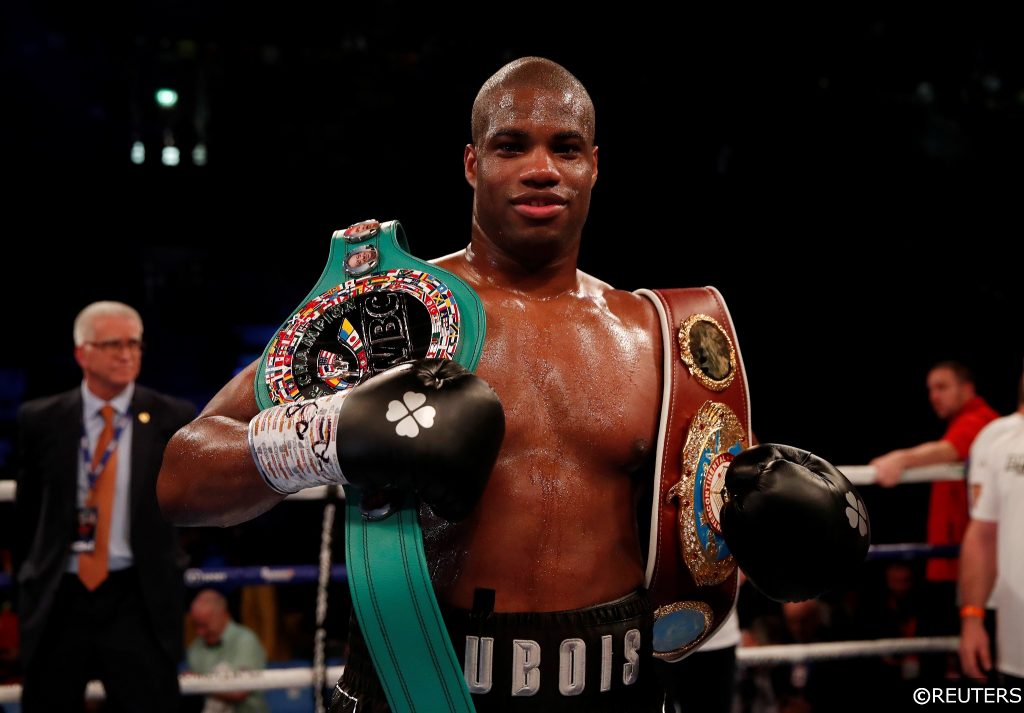 Boxing fans are in for a busy weekend as we welcome high-profile action from both sides of the Atlantic.

Church House Westminster features the biggest professional bout of the weekend as in an all-British clash between Daniel Dubois and Joe Joyce.

Both fighters head into the weekend undefeated in professional boxing and boasting 24 knockouts in 26 professional fights between them. The youthful power of Dubois is expected to prevail on Saturday night, with the vastly experienced 35-year-old Joyce a heavy underdog.  Victory for Dubois would propel him even further up the rankings after an already meteoric rise in the boxing world.

Elsewhere, two legends return to the ring in Los Angeles as Mike Tyson takes on Roy Jones Jr in an exhibition bout, and while no winner is likely to be announced in that fight there is plenty to look forward to on the undercard.

YouTube star Jake Paul facing off against former-NBA point guard Nate Robinson is one of the biggest attractions. It’s the third time that Jake, brother to KSI opponent Logan Paul, has stepped into the ring and he’s heavy favourite to get the win against the ageing Robinson.

You can find all the rest of our boxing tips here.

Daniel Dubois vs Joe Joyce: Boxing tips and predictions, UK start time and where to watch on TV

UK start time: Undercard gets underway at 7pm on Saturday, November 28, with Dubois vs Joyce ring walks scheduled between 10pm and 11pm

Where to watch on TV: BT Sport 1 and BT Sport Ultimate

British heavyweight champion Daniel ‘Dynamite’ Dubois faces his sternest test to date on Saturday night in London as he faces experienced Olympian Joe Joyce, but it’s a task that the hard-hitting sensation is fancied to come through unscathed.

In his short professional career, heavy-handed Dubois has knocked out 14 of his 15 rivals and can dish out similar treatment to 35-year-old Joyce, who is also undefeated as a professional.

‘Juggernaut’ Joyce enjoyed a decorated and lengthy amateur career and has fought professionally 11 times, whereas 23-year-old Dubois chose to turn professional in 2017 rather than join Team GB for the Olympics.

Despite the clear gulf in experience, Dubois will not be found wanting for technique in this contest, he punches hard and his biggest weapon is a brutal left jab, which he will look to early on in order to dominate.

Joyce is durable and willing to trade shots, but his heart and relentlessness coming forward could be his undoing.

Dubois is destined for great things in the ring, he has the power to stop Joyce early on and set up a potential world title shot in the next 18 months.

Jake Paul vs Nate Robinson: Boxing tips and predictions, UK start time and where to watch on TV

UK start time: Undercard begins at 1am on Sunday, November 29 with Jake Paul vs Nate Robinson expected between 3am and 4am.

The bout is scheduled for six rounds at cruiserweight and is the chief support on the undercard of the Mike Tyson vs Roy Jones Jr event at the Staples Centre in Los Angeles.

This is the third time Paul steps into the ring, his second professional bout, and he is fancied to get the better of former point guard Robinson, who is 13 years older and has not played in the NBA since he left the New Orleans Pelicans in 2015.

Back in January, Paul gained a second-round stoppage win over fellow YouTuber Ali Eson Gib in Miami and that previous fighting experience should stand him in good stead here.

This is not expected to be a showcase of refined boxing technique, but Paul’s significant height and reach advantage can help him achieve another win via stoppage in the middle rounds of the fight.