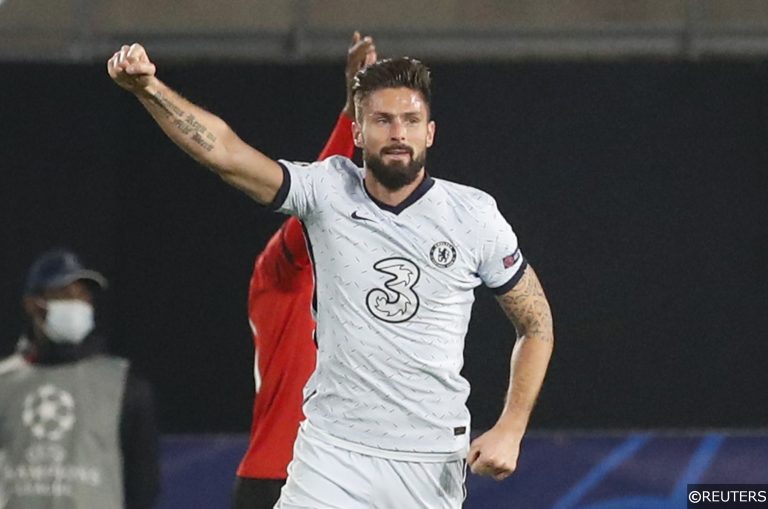 The climactic fixtures of some of the Champions League’s Last 16 double-headers take place later this week, when several of Europe’s biggest and best teams lock horns for a place in the tournament’s quarter-finals.

On Wednesday, Bayern Munich are expected to enter cruise control when they approach their Last-16 second-leg at home to Lazio armed with a big lead, while Chelsea and Atletico Madrid square off at Stamford Bridge with just a goal between them.

Ahead of the action, we’ve pulled together some handy information for those of you planning to put a bet builder or same-game multi together before kick-off.

We’ll go through some of the most popular markets in bet builders and give you tips for maximising the value out of them, and we’ll finish off with multi-part tips for each fixture from Betfair’s #OddsOnThat!

Don’t forget to check out our Champions League predictions for some more analysis and free betting tips.

Bayern Munich blitzed Lazio 4-1 last month in Rome, and the free-scoring Bavarians should enjoy themselves with the pressure off in the second leg. The German giants have won 17 of their last 18 games in the competition, and another Champions League victory looks probable on Wednesday.

Chelsea are still unbeaten under Thomas Tuchel and the Blues flexed their newly developed tactical muscle under the German to beat Atletico in Spain last month. Chelsea look robust enough to carve out another victory against a low-scoring Madrid outfit in the return leg.

We have to go all the way back to February 2020 to find the last fixture Bayern Munich failed to score in, though the Bavarians’ commitment to attacking football can sometimes leave spaces to exploit at the other end. Die Roten haven’t kept a clean sheet in their last six attempts, and Lazio could notch a consolation at the Allianz Arena.

Chelsea have yet to concede a single goal at Stamford Bridge since Thomas Tuchel’s appointment, and the rock-solid Blues could lean on their strong defensive foundations again when they meet Atletico Madrid in London.

Verdict: Both teams to score – no

Bayern Munich have scored a staggering 23 times in just seven Champions League fixtures this term, and unsurprisingly, over 2.5 goals landed in all but two of those games. The Bavarians hit four past Lazio last month, and Wednesday’s second skirmish between the sides could be just as one sided.

While Chelsea’s defensive improvements under Tuchel have been notable, the team haven’t quite clicked further up the pitch, and the Blues have been involved in plenty of low-scoring games as a result.

11 of Chelsea’s 12 fixtures with Tuchel in charge produced under 2.5 goals – including their encounter with Atletico last month – and the same market appeals for Wednesday’s return leg.

With an eye-watering nine goals in his last six run-outs for Bayern, Robert Lewandowski’s output continues to defy belief, and the Polish international is always worth backing to find the net when he pulls on the Bavarians’ famous red shirt.

French stalwart Olivier Giroud was the difference-maker for Chelsea in their slender triumph over Atletico Madrid in Spain last month, and the vastly experience goal-getter – who has a knack of netting on the big occasion – is worth backing to make his mark against the La Liga leaders again on Wednesday.

While taking Robert Lewandowski would be the easy option here, backing Leroy Sane at more palatable prices in the same market appeals instead. Only Lewandowski is averaging more attempts per Champions League appearance this season than the winger, while Sane has been testing the keeper with 0.8 of his efforts per game on average.

Olivier Giroud has been Chelsea’s go-to guy in the Champions League this season, and the Frenchman was the Blues’ match-winner against Atletico Madrid last month. The 34-year-old is averaging 1.4 attempts on target per 90 minutes overall in the competition this term, and he looks a sold bet to find his range again this week.

A bone-crunching seven players had their names taken by the referee in an ill-tempered first-leg skirmish between Lazio and Bayern Munich in Rome, and the tackles could fly again when the teams square off for their rematch in Germany.

Five players involved in Chelsea’s first meeting with Atletico Madrid last month were shown yellow cards, and a similarly high bookings count is expected in what should prove a tense battle at Stamford Bridge in Wednesday’s climactic contest.

Lazio wingback Adam Marusic picked up his second Champions League booking of the campaign in last month’s Last 16 first-leg against Bayern Munich on an evening when the Montenegrin really struggle to get to grips with Bayern Munich’s pace on the flanks. The 28-year-old should find the second-leg just as difficult to navigate and he is worth backing to pick up another booking as a result.

Verdict: Adam Marusic to be booked

Stefan Savic’s disciplinary record this season is really poor and the Atletico centre-half has already been cautioned a whopping 14 times this season in 31 La Liga and Champions League appearances combined. Nine of those cards were collected in matches on the road for the Spanish table toppers, and Savic’s aggressive streak could land him in more bother at Stamford Bridge.

Verdict: Stefan Savic to be booked