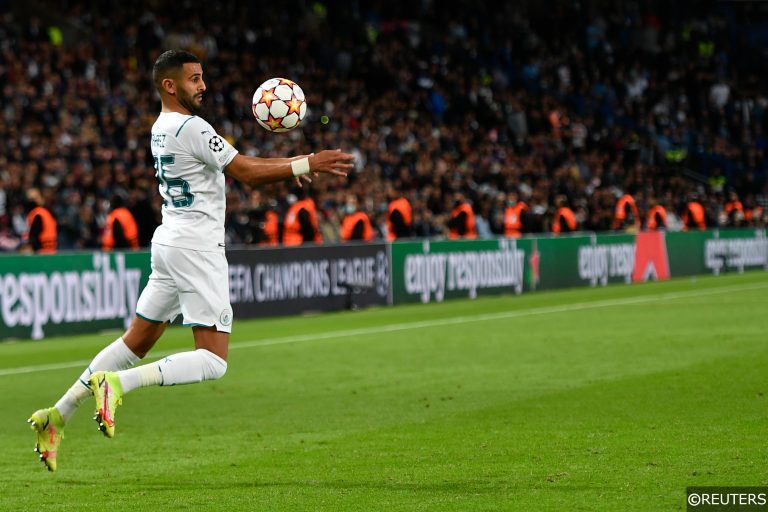 The Champions League’s winter break finally ends this week, as the last 16 kicks off on Tuesday night. You may have already seen our 449/1 treble on the three European cups, but this time around we’re taking a deep dive into the continent’s biggest competition.

We’ve got our outright winner prediction on top of a top goalscorer and outsider prediction. You can also read on to find our last 16 accumulator tip, which is a 15/1 attempt to predict the quarter-final line-up.

City finished their Champions League group ahead of PSG, while they’ve continued to improve since then. The Citizens have won 11 of the 12 games they’ve played since the competition stopped in December, which has launched them clear at the top of the Premier League.

Pep Guardiola’s side aren’t exactly under threat at the top of the table and they should be able to switch their focus towards Europe before long. They aren’t expected to have any issues in the last 16, with a straightforward clash against Sporting to come.

Things will get trickier from the quarters onwards but there aren’t many sides in Europe who can really scare City. They’re the standout favourites and this looks like the year when they finally end their wait for Europe’s biggest prize.

He’s an outsider, but at 50/1 there’s a lot of value in Mahrez in this market. The Algerian has scored nine times across his last 10 Champions League games, coming into form for the latter stages of last season’s tournament.

He has five goals to his name in the competition this term and the last 16 offers Mahrez a chance to add to that. A straightforward clash against Sporting is an opportunity to rack up the goals, while the winger will be key for City again in the latter stages. While he’s got a big of a gap to close on the leaders, Mahrez is a great price.

It feels strange to have the record 13-time winners as the Champions League surprise package, but they come into the last 16 as outsiders with the bookies. Real are seventh-favourites to lift the trophy, having landed fifth-favourites PSG in the last 16.

However, the French side don’t have a stellar track record in Europe. They’re already reportedly looking for former Real boss Zinedine Zidane to replace Mauricio Pochettino, who failed to win Ligue 1 last term and who has oversaw a French Cup exit this term.

Meanwhile, Real look stronger than the side who made the last four last term. Carlo Ancelotti has a fantastic track record in this competition and he’s led Real to the summit in La Liga. The 13-time winners should hang about in Europe and given their quality there’s value in backing them at 7/1 to make the final.

Following the last 16 draw we picked out eight sides to qualify for the last eight. We’ve backed each of the Premier League sides to make it through to the next round, with Chelsea and Man City heavy favourites against Lille and Sporting. Atletico Madrid’s shaky defence makes Man United worth backing, while Inter’s European struggles should see Liverpool through.

We’ve also backed Real Madrid to see off PSG, Bayern Munich to stop Salzburg and Ajax to sweep aside Benfica. Meanwhile, Juventus have been dealt shock defeats by Ajax, Lyon and Porto in the last three seasons so Villarreal to upset the Old Lady rounds off our eightfold.