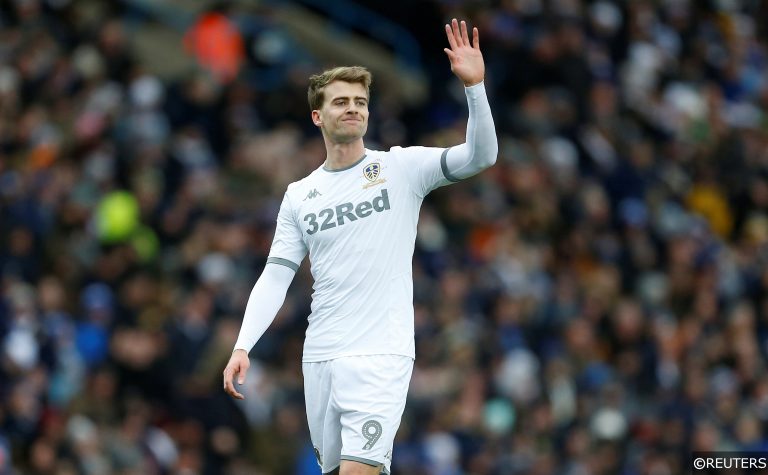 2019 was the year of finales, bringing about the end of Star Wars, Game of Thrones and Jose Mourinho’s career as an elite manager. However, 2020 hasn’t quite matched those dramatic endings, but the wrap up to this season’s Championship campaign is about to change all that.

You might have thought that the Premier League was football’s equivalent to Game of Thrones, given the riches, mercenaries and mind games. After all, Tony Pulis had a monstrous horde from the icy north at Stoke long before HBO brought one to our screens.

However, football’s real battleground comes in this pulsating Championship finish. For many fans, Wednesday is the long night they’ve been fearing. There are three undecided relegation slots, two playoff places and the final automatic promotion place all still to play for. Unlike Game of Thrones, this is a finale worth watching.

Fight for the top-flight 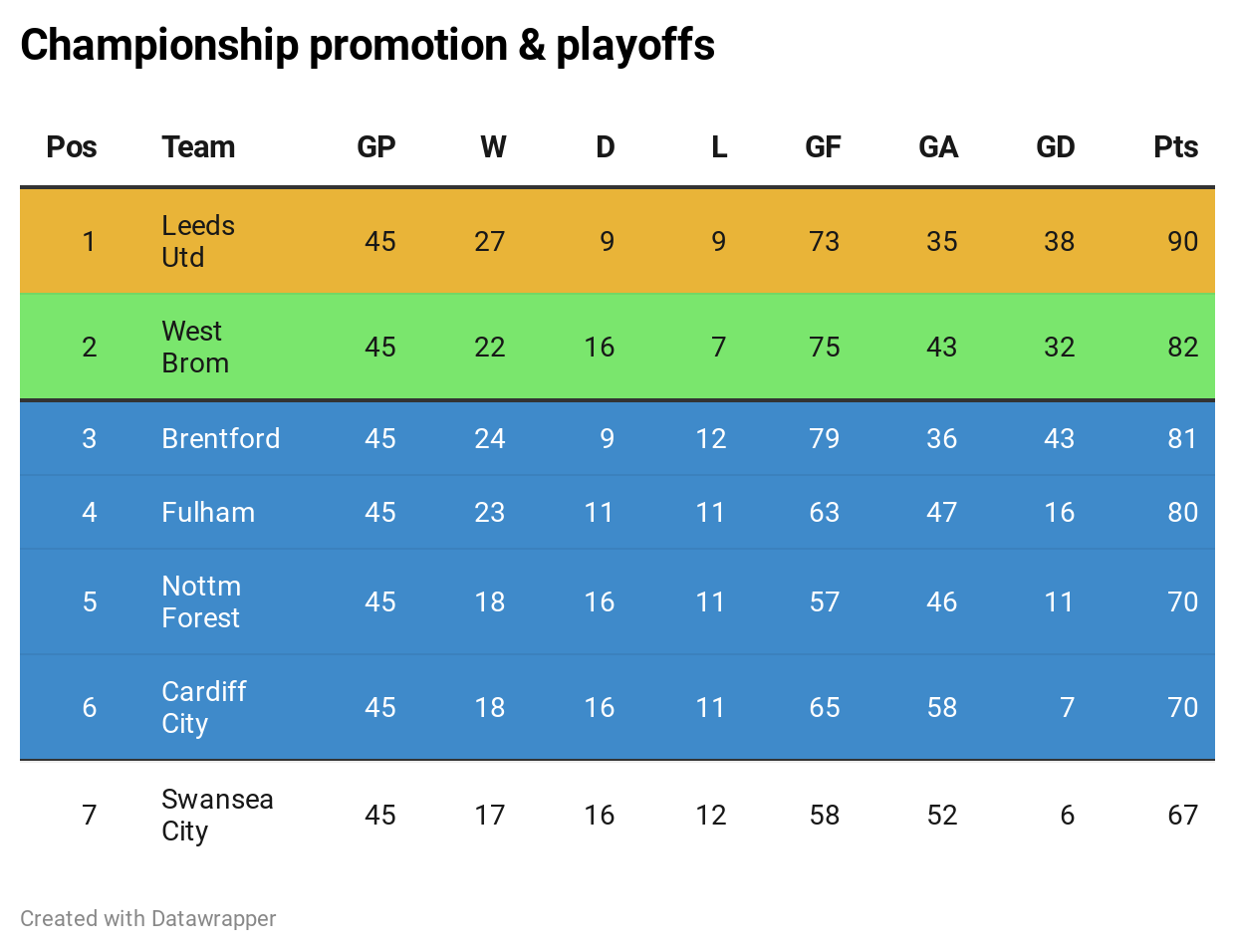 Leeds have already secured the Championship crown ahead of their final day encounter with Charlton at Elland Road. They will lift the trophy tonight live on Sky Sports in the aftermath of tonight’s live matches. Until then, Leeds are in the shadow of a huge battle for promotion, as none of the six teams behind them have secured their positions yet and each of them could end up featuring in the playoffs.

We’ll start with an incredible three-way fight for second place. After both slipping up at the weekend, West Brom and Brentford have been joined by Fulham in the race for the last automatic promotion spot.

West Brom need to win their home clash with QPR to book their Premier League place. Meanwhile, Brentford a WBA slip and a home win against Barnsley to move into the top two. Should West Brom lose and Brentford drop points, then a Fulham win at Wigan would send the Cottagers back to the top-flight.

Slightly spoiling all of that is QPR’s current situation. As west London rivals to both Brentford and Fulham, they aren’t going to be desperate to do them a favour. Meanwhile, West Brom would owe the Rs a promotion payout as part of Darnell Furlong’s move to the Hawthorns.

It’s going to be interesting to see how Mark Warburton’s men approach it, but they did end Millwall’s playoff hopes with a 4-3 win at the weekend. Hopefully, they produce a similar display to set up an exciting finish at the top.

Swans hope in chase for the playoffs

Old rivals Cardiff and Swansea have one last battle to finish the season as the pair chase a playoff spot. The Bluebirds would have to lose a straightforward clash with Hull at home to fall out of the top six, while Swansea need to pick up three points at Reading to give themselves a chance.

A positive result for Cardiff won’t end seventh-placed Swansea’s hopes. If Swansea win, Nottingham Forest lose and they produce a five-goal swing in the goal difference, then the Swans can beat Forest to a playoff spot. That would see the two Welsh sides into the post-season promotion fight and leave the possibility of an all-Welsh playoff final.

It would represent an incredible collapse given that Sabri Lamouchi’s men have been in the playoff hunt all season. Having failed to win in five – including the weekend loss then-bottom Barnsley – Forest could struggle. They face a Stoke side who blew Brentford’s automatic promotion hopes at the weekend. 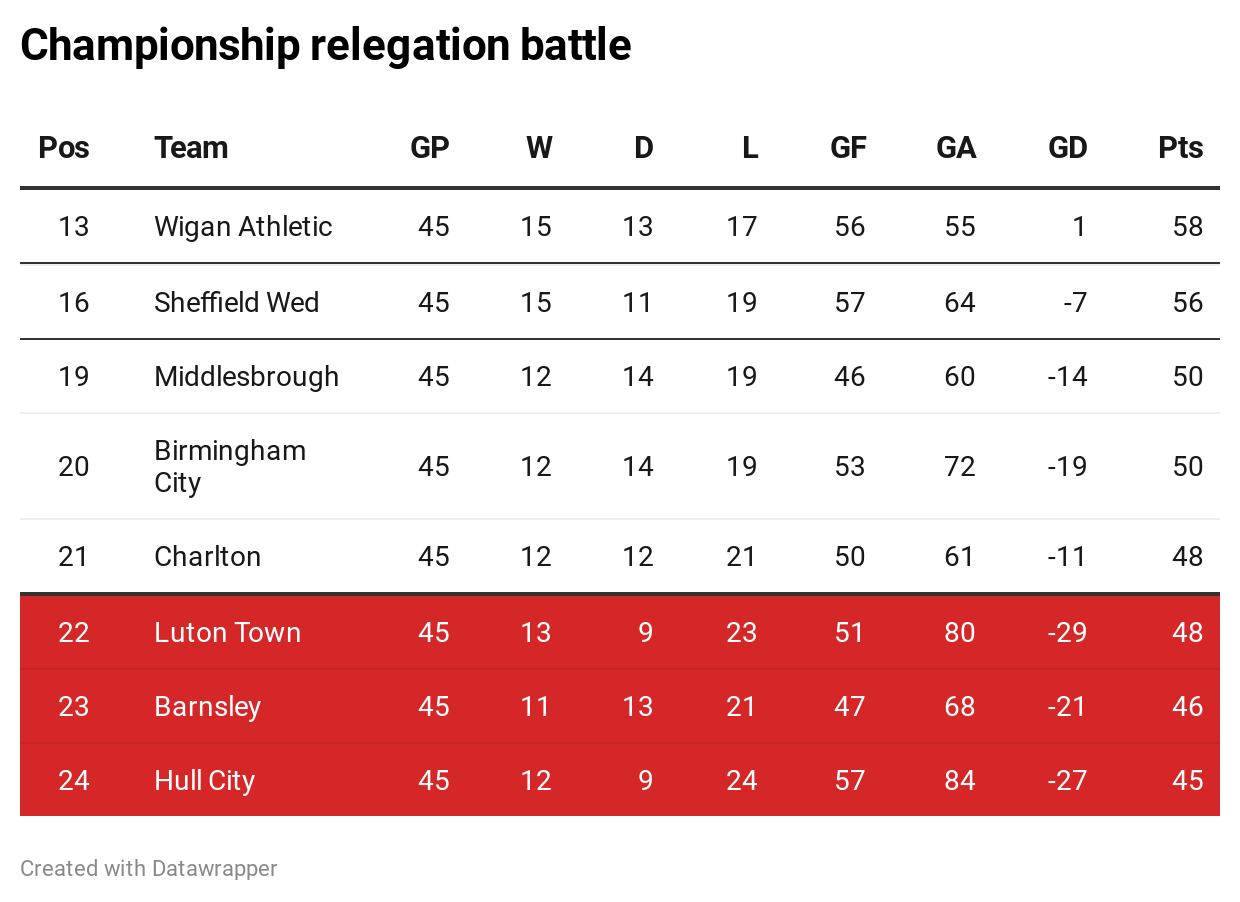 The bottom of the Championship is where the real drama is this week. Incredibly, six of the remaining 12 fixtures contain a side at risk of the drop. The EFL confirmed on Wednesday that Wigan’s 12-point administration penalty would be applied immediately after the last round of games. If we applied it now, they slip from 13th to third-bottom. Sheffield Wednesday are also facing what is said to be a significant hit themselves, while a 12-point penalty for them would leave them bottom.

Wednesday’s game just sums up the odd situation in the relegation fight. The Owls – who are 16th and eight-points clear of danger – host Middlesbrough. Boro are 19th and just two points clear of the drop. However, Wigan’s likely points hit means they are safe on 50 points, while a Wednesday side three places above them need to fight for their life.

Essentially, Wigan and Wednesday need to get as far from the bottom three as they can on the final day. Meanwhile, the current bottom four are separated by three points and all still fear the drop.
Hull head to Cardiff with morale low and their squad depleted after major departures in 2020. It is hard to see anything but League One in their future. However, the three promoted sides – Barnsley, Luton and Charlton – are all still alive. Strong results for them on the final day could see them all stay up if Wigan and Wednesday are deducted enough points.

Essentially, the only side who can know for sure that they are safe is the side out of Charlton, Luton and Barnsley who finish the highest. If the team in 22nd can finish within 12 points of Wigan (the gap is currently 10 points) they are likely to survive, as could the team in 23rd. All this finale just launches a legal-drama spin-off, but expect plenty of movement across the evening.