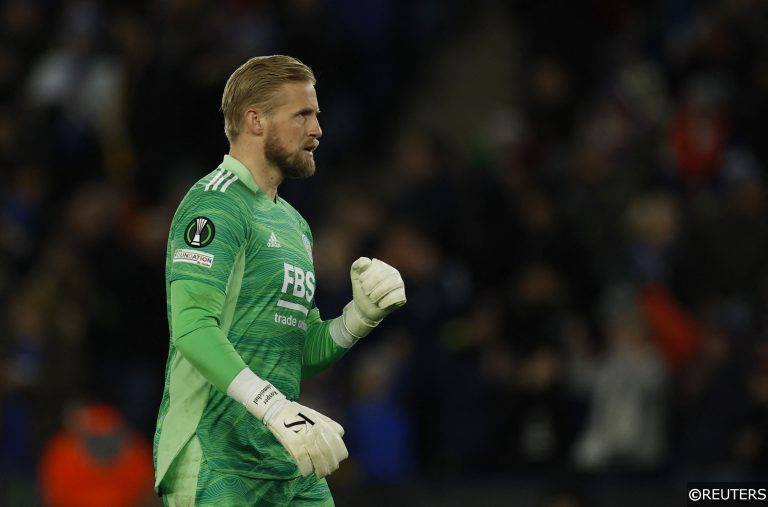 UEFA’s new third continental competition wasn’t on Brendan Rodgers’ radar in December, but now his Leicester side are among the last 16 sides who are out to lift the trophy. The road to the final in Tirana is becoming clearer, especially with the eight group winners returning to the competition this week.

That includes competition favourites Roma, with Jose Mourinho out to complete his set of European trophies after multiple Champions League and Europa League successes.

The stage is set for eight great last 16 ties, so we’ve run the rule over the matchups ahead of this week’s first leg clashes. We’ve also put together a to qualify accumulator tip, which you can back below at 22/1!

Slavia Prague eliminated Turkish giants Fenerbahce in a thrilling 6-4 aggregate win in the last round and they should have little trouble getting past a LASK side who find themselves down in eighth in the Austria Bundesliga.

The Austrians may have performed well in the group stage against relative minnows but they head into this tie with just one win in five since returning from the winter break and Slavia Prague have won six successive games, including both legs of that clash with Fenerbahce.

Gent are odds-on favourites to qualify but defeats away to Anorthosis and Rakow Czestochowa make the underdogs the value play here. PAOK edged past Midtjylland in the last round and have lost just one of their last 20 competitive games.

The Greek side haven’t lost a home game since November and if they can take a lead over to Belgium for the second leg I fancy their chances to hold Gent at bay.

Roma may have had their ups and downs under Jose Mourinho but The Giallorossi are among the favourites to lift the Europa Conference League and they approach this tie in good form. They have lost just one of their last nine matches and helped themselves to a second successive Serie A victory at the weekend.

Vitesse have lost four of their last seven and have been on the end of some heavy Eredivisie defeats recently. Roma are a much better side on paper and in decent form to boot, so I expect a first leg advantage being taken back to the Italian capital and Roma to ease through to the final eight.

The suspension of top scorer Ricardo Gomes is a huge blow to Partizan’s chances in this first leg and with just one defeat in their last 11 away games Feyenoord can build a healthy first-leg lead in Belgrade .

The Dutch outfit have won four of their last six league games and while Partizan are in healthy form domestically the absence of Gomes is sure to be felt. With Feyenoord scoring at least twice in each of their last five Europa Conference League games I expect a relatively comfortable passage through for the favourites.

Marseille eased past Qarabag via a 6-1 aggregate scoreline in the last round and they will be confident in their chances against a Basel side that have only won three of their last ten competitive matches.

Basel were held against Qarabag, as well as Cypriot minnows AC Omonia, in the group stages and have been on the end of heavy defeats against Young Boys and Zurich recently, while Marseille are battling it out for a top-two finish in Ligue 1 and have the quality to get past the out-of-form Swiss side.

Leicester may have returned to form lately and I have them as favourites for the first leg but I still think Rennes have what it takes to overturn a first leg deficit back in France.

Rennes have won four of their last five games and scored 12 goals in the process, with their only failure being a slender defeat away to PSG. Leicester’s recent victories have all come against much weaker opposition than a Rennes side hunting for Champions League qualification and while I do expect a tight affair the French side have what it takes to get past the Foxes.

PSV have won four of their last five in all competitions and are justified favourites to progress past Copenhagen in the last 16, especially with hopes of an Eredivisie, Dutch Cup and Conference League treble still on the cards for the Eindhoven outfit.

Copenhagen have failed to win five of their eight previous meetings with Dutch opponents and another defeat over two legs is on the cards here.

Bodo/Glimt put in a fantastic display to beat Celtic in both legs of their previous Europa Conference League outing but their dream run could come to an end at the hands of the high-scoring AZ.

AZ have lost just one of their last 21 matches in all competitions and 16 of their last 18 have ended in victory, with a defeat to Ajax being their only real blemish on this fantastic run. They went unbeaten in the Europa Conference League group stage and won four of their six outings, so I expect them to do the business against their Norwegian opponents.

Win a trip to Manchester United vs Chelsea!

In the Mixer: Experts go head-to-head with Europa bets