Well, what a crazy set of mid-week fixtures those were! No team was awarded a clean sheet as all 20 Premier League sides found the back of the net in a single gameweek for the first time since 2010, landing some massive BTTS bets in the process! Moving on to this weekend…

And what changes to your fantasy football team should you make before then? That’s what FST is here for! We’ve analysed some of the best long-term and differential options available for Gameweek 16. Find them below. 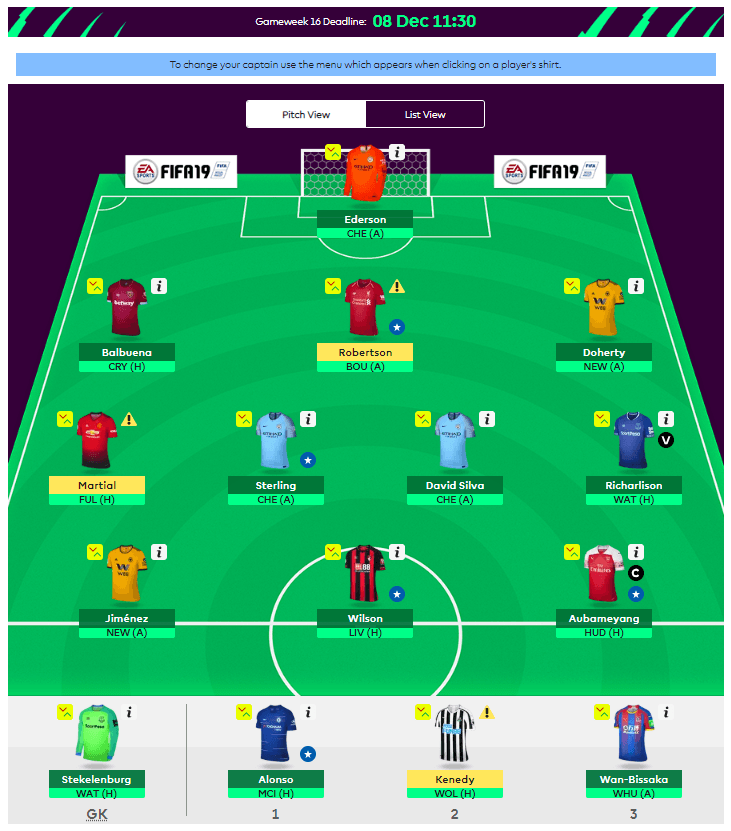 After a sluggish start to the 18/19 Premier League campaign, Aubameyang looks back to his best and as dangerous as ever. His brace in the North London derby last weekend took him to 10 goals total – top of the Premier League goalscoring charts – and when combined with his assist and three bonus points earned him a massive 16 point haul. Nobody can say that his form in the second half of last season was a fluke.

Auba is the joint third highest scoring player in the game and he’s averaging a massive 6.2 points per game – what would have been one of the best averages among forwards last season too. His 14 shots on goal since gameweek 10 also place him high up the rankings among Fantasy Premier League forwards in that category. He should be able to maintain those numbers against a poor Huddersfield defence on Saturday. 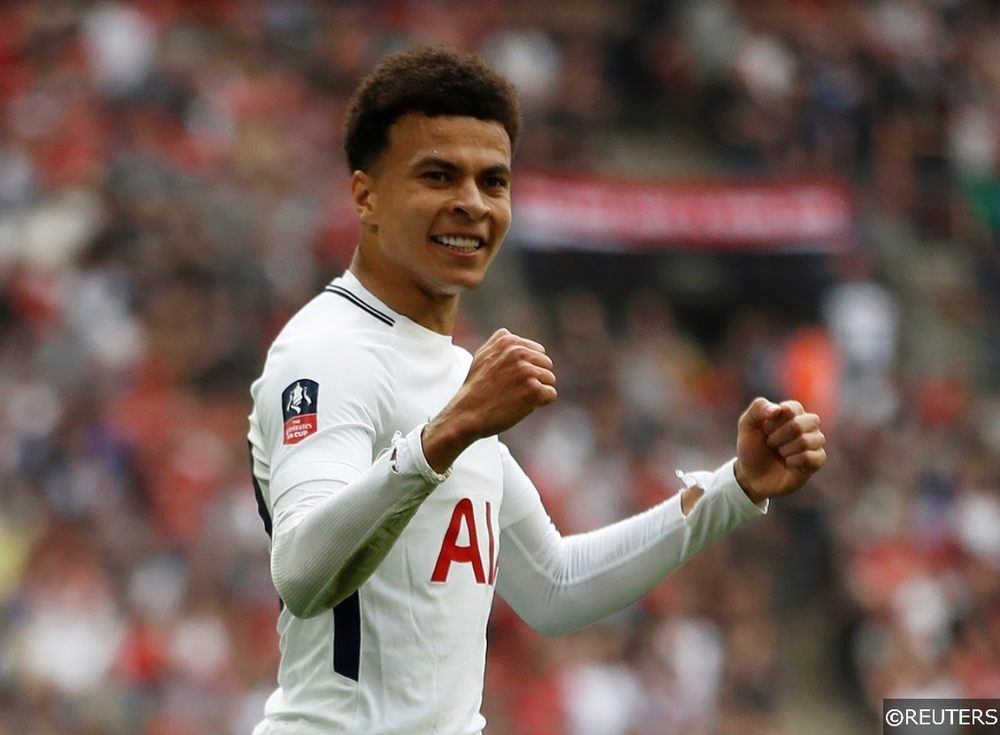 Pochettino’s men bounced back strong from a crushing North London derby defeat in Wednesday’s 3-1 win at home to Southampton, and though Alli was only given a short 10-minute cameo off the bench, from which he neither scored nor assisted, that would suggest he will feature more prominently over the next few weeks. The Englishman has already put in a few strong performances since returning from injury, those against Chelsea and Inter Milan spring to mind, and we all know what he is capable of by now.

He has three stellar seasons of Premier League (and Fantasy Premier League) football under his belt and he’s not in bad form with a goal and an assist from his last two starts. Spurs have been particularly impressive away from home, not only scoring in all nine of their matches so far but by also scoring the second highest number of goals on the road (17 goals) – only Arsenal (18) have recorded more. Spurs face a Leicester side that was fortunate to get a point away to Fulham on Wednesday.

Felipe Anderson has become more and more influential at West Ham as the season has gone on, and with Marko Arnautovic sidelined for the Christmas period, he should be playing an even more pivotal role in the weeks to come. Anderson has bagged fours goals in his last five matches, and despite blanking against Cardiff on Tuesday, his underlying stats show why he’s arguably the best West Ham asset.

His 11 shots on target are second in the West Ham team only to fan-favourite Arnautovic (17), but Anderson also has creativity on his side, with his 28 key passes ranking him in the top 10 of all Premier League creators. Crystal Palace’s defensive record on the road only furthers his potential for Saturday. Roy Hodgson’s side has conceded two goals or more in four of their last five league outings on the road, and with Anderson’s attacking numbers on the rise, he’s our favourite to reap the rewards.

Richarlison’s up and down 17/18 campaign at Watford looks to be correlated to one major variable – the presence and eventual absence of manager Marco Silva. So when the Brazilian was reunited with the Portuguese coach at Goodison Park over the summer, it came as no surprise that the winger got his 18/19 season off to a flyer. Richarlison has scored seven goals and assisted one over 13 appearances for Everton so far and he’s even been playing the lone striker role over the past few weeks.

He converted one of his six shots on goal in The Toffees’ match against Newcastle during the week and his promising displays make him a desirable target ahead of a match at home to Watford. The Hornets have kept a clean sheet in just 14% of their Premier League away days in 18/19 and they’ve also conceded two goals or more in each of their last three league outings. Richarlison should be instrumental in what looks likely to be a strong home showing. 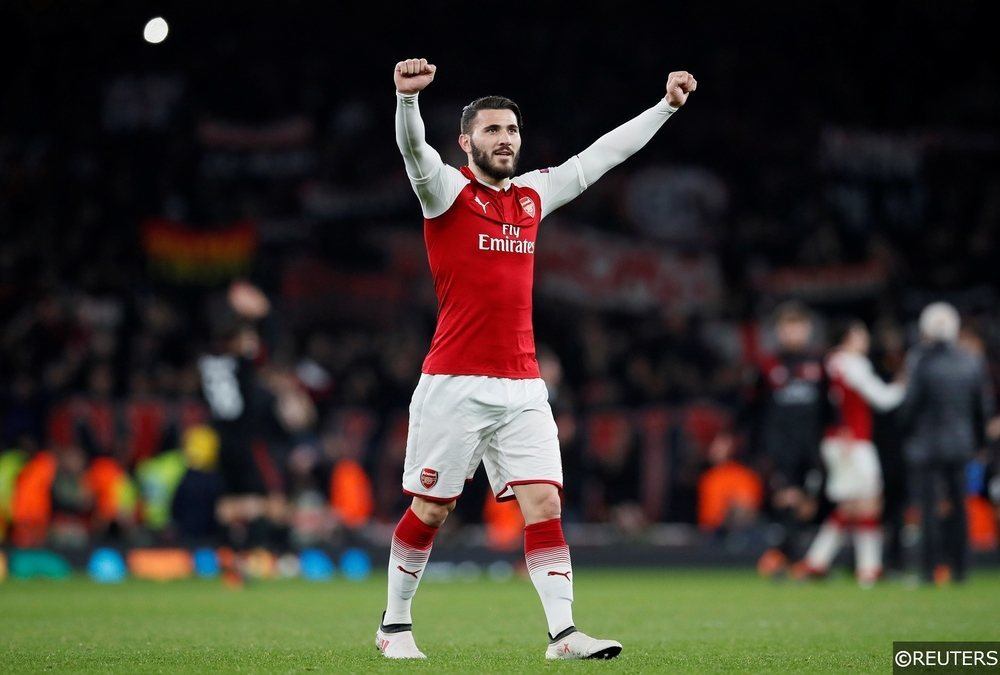 Sead Kolasinac has been one of the most impressive creators in the Premier League over the past few weeks – you’d have been forgiven for thinking he was a left-winger in the late stages of their match against Man United on Wednesday! He’s made 10 key passes in the three matches following Emery’s switch to a 3-4-2-1 formation, with Kolasinac playing a very advanced left wing-back role. Such numbers rival some of the best creators in the Premier League.

His creativity has already paid off this season too, with the Bosnian having two assists and 3 bonus points to his name from five league starts. Kolasinac’s desirability as a Fantasy Premier League asset is boosted by Arsenal’s upcoming fixtures, which include hosting Huddersfield on Saturday, followed by a trip to Southampton and another home game against Burnley. He could be a huge differential at just £4.9m.