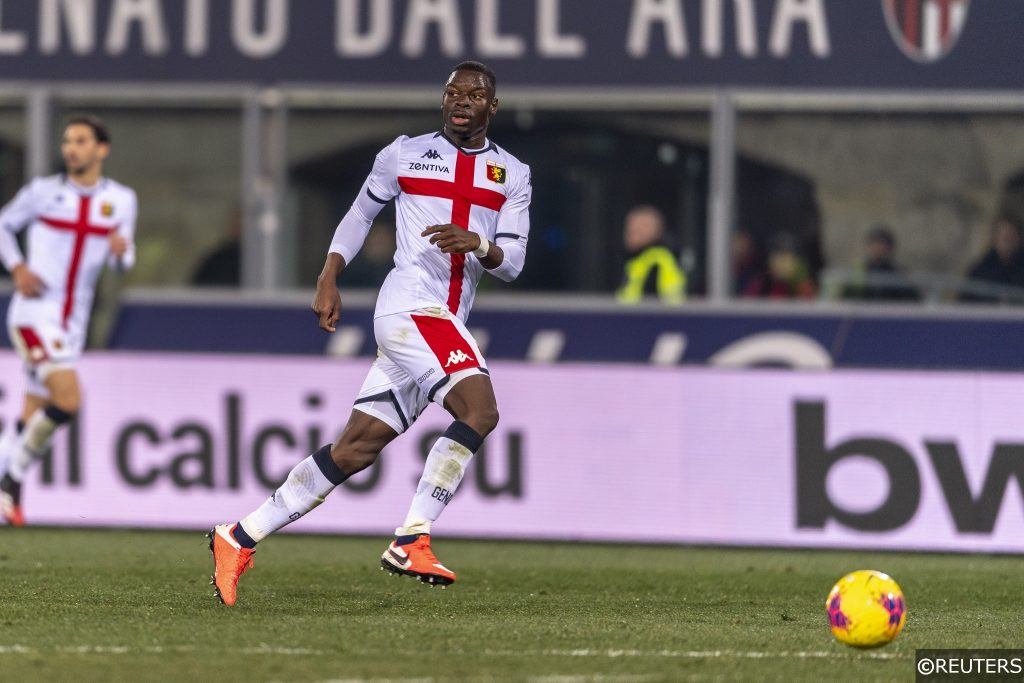 With Football Index, traders can use their knowledge to buy shares in players whose stocks are low, sell them when their values skyrocket, and pocket a reward in between.

Apart from fluctuations in share prices, traders can also earn a profit on ‘Match Day Rankings,’ which uses Opta data to monitor footballers across Europe’s top five leagues, the Champions League and Europa League, to find the Top Defender/GK, Top Midfielder, Top Forward and Star Player from each Match Day. As explained in our Football Index FAQ article, players can also earn profits from Media Rankings and In-Play Dividends.

No matter what the league, or the team, or the age of a player, you can rake in the earnings with Football Index. Now, everyone knows about the likes of Jadon Sancho, Bruno Fernandes and Neymar, but here are three under-the-radar players who could churn out some hefty profits for Football Index traders.

Sign-up to Football Index and get a £1,000 money back guarantee with the code FST20!

Still not sure whether Football Index is for you or not? Fortunately for you FI are offering a generous £1,000 money back guarantee only available if you sign up with the code FST20. Just sign up below, make a £10 deposit or more and if you haven’t made a profit after a week just Instant Sell all your shares, give Football Index an email and they’ll refund your losses up to £1,000!

Enrico Preziosi needed a miracle. As one of the most unpredictable and trigger-happy owners in Italy, Genoa fans had grown all too tired of his penny-pinching style, and demanded him to sell the club on more than one occasion. The Grifone, which had narrowly stayed up in Serie A last season, had been mired in the relegation zone since the onset, and the constant managerial changes didn’t help either. In order to survive in the top flight, he needed to hit a home run with the January transfer window.

To reinforce the attack, they brought in Vittorio Parigini and Iago Falque from Torino, while also bringing Bologna’s Mattia Destro back to Genoa. They brought back Mattia Perin on loan from Juventus to provide an assured set of hands in goal. They signed Sebastian Eriksson from Göteborg to provide depth in midfield. And finally, to shore up a leaky defense, they sought out two experienced heads who had struggled for playing time at this season — Adama Soumaoro from Lille and Andrea Masiello from Atalanta.

Soumaoro had risen up Lille’s academy to eventually become the club’s vice captain, earning praise for his solid performances in the centre of defence. He even attracted a €20 million bid from Crystal Palace in 2018, which was promptly rejected by Les Dogues. But injuries took their toll on Soumaoro, and after looking set to join Monaco last summer, the move fell through due to a failed medical.

Lille agreed to let Soumaoro join Genoa on loan with a €10 million option to buy, and since arriving in Italy on deadline day, he’s made that fee look like a bargain. Playing in the middle of Davide Nicole’s back three, he’s recovered his best form in Italy, dominating in aerial duels, winning physical battles, and even chipping in a goal against Bologna.

With Soumaoro in the line-up, Genoa have taken nine of a possible twelve points, and for the first time all season, they’ve made their way out of the relegation zone. If they are to remain in Serie A, Preziosi and the rest of Genoa’s fanbase will be praying on Soumaoro to stay fit — and focused.

The suspension of Serie A action due to the coronavirus outbreak has hit Serie A player prices in the short term, but that makes this the perfect time to top up. With their schedule falling so far behind, that should result in a lot of Bronze Match Days involving Italian teams later on in the season. Soumaoro has been picking up respectable PB scores for Genoa since arriving in January, and with the potential for plenty of Bronze Day action to come and Genoa’s form improving I can see him rising from his bargain basement price of £0.32 before the end of the campaign. 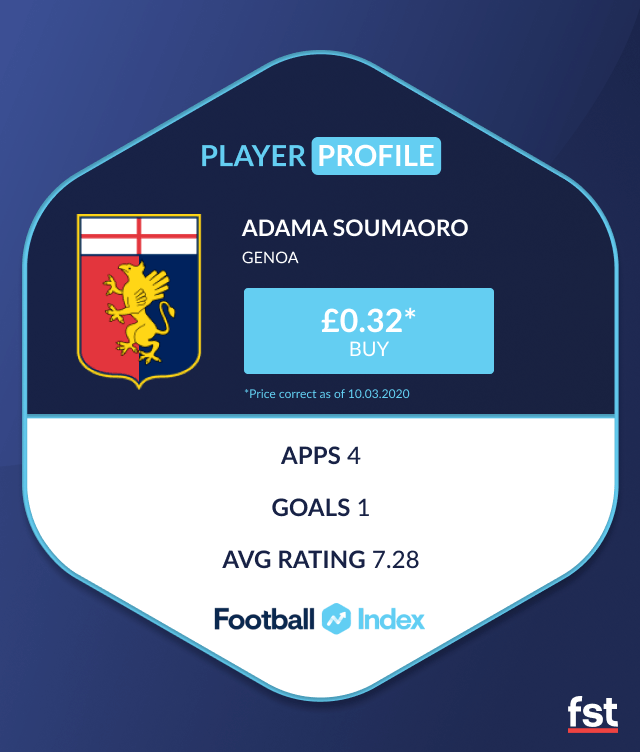 Plenty of eyebrows were raised when Pablo Fornals joined West Ham for a fee of £24 million this summer.

The Spaniard nearly joined Napoli in the January transfer window before the deal fell through in the final minutes, but as one of the premier playmakers in La Liga, it was widely expected that he would make the move to a Champions League or Europa League side. Nevertheless, it was a major coup for Mario Husillos and Manuel Pellegrini, who secured one of Spain’s brightest young gems.

However, it wasn’t as smooth of a start as many expected. Fornals struggled to adapt to the pace and physicality of the Premier League, and found himself locked out of the line-up on several occasions. But despite his slow start, he finally gained consistency and confidence in November, looking far more like the player who turned defences inside out at Villarreal than the one that had been a shadow of himself in the first few months.

Even when playing on the wing, rather than his natural position of central attacking midfielder, Fornals still put in a shift during the final weeks of Pellegrini’s reign, breaking the lines with his passing and breezing past opposing defenders.

But after becoming a consistent performer under Pellegrini, Fornals’ starting spot was threatened by the hiring of David Moyes. He’s seen his minutes limited under the Scotsman, who has tinkered with a 5-3-2 formation, and preferred the likes of Manuel Lanzini and Robert Snodgrass to his Spanish playmaker.

However, his luck changed recently. Due to January arrival Tomáš Souček’s injury, Moyes has been forced to change things up, opting for a 4-4-2 against Southampton with Fornals on the left wing. The result? Fornals grabbed two assists as the Hammers grabbed a crucial three points against their relegation rivals.

Whilst Moyes may be tempted to go for a more defensive approach in what promises to be a long, mentally grinding relegation fight, players like Fornals are just too good to leave out of the line-up.

But what does this mean for his future on the Index? A goal and an assist against Gillingham back in January saw his price hit its peak since his arrival at the London Stadium, trading at £1.19 on the 9th January before dropping away when it became clear that he was on the fringes of Moyes’ plans.

Fornals has now scored once and assisted twice in his last three appearances and has enjoyed a slight rise in price. With him now set for a regular starting position, a good run of performances could easily see him rise towards the £1.20 mark once again. 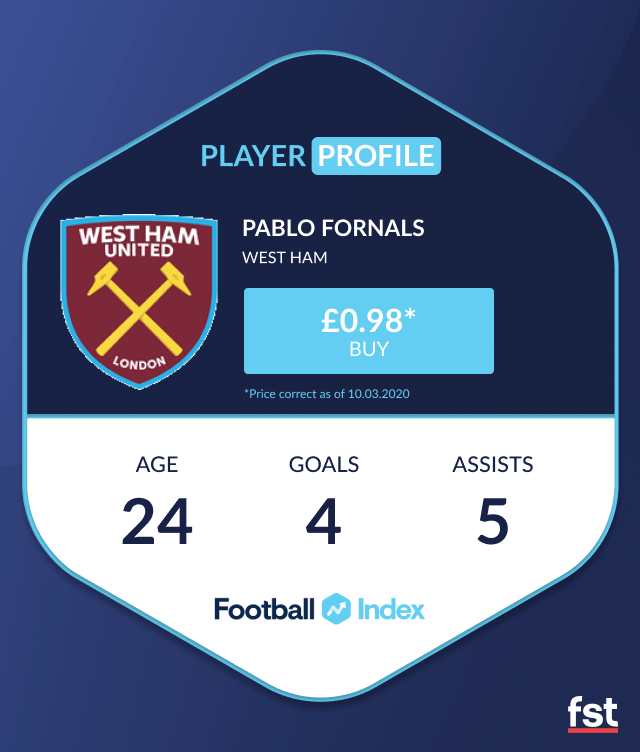 In the final weeks of the summer transfer window, Aston Villa were working on one last signing: a defensive midfielder. They had already brought in Marvelous Nakamba and Douglas Luiz, but they pushed for one last player: Baptiste Santamaria. Nevertheless, Angers rejected their €10 million bid, and Santamaria stayed in Anjou for one more season.

Stéphane Moulin’s side are currently 10th in Ligue 1, well above any threat of relegation, and a mere two points away from the European positions. This success comes in spite of a transfer window which saw two of their most creative players — Flavien Tait and Jeff Reine-Adelaide — depart. Sporting director Olivier Pickeu brought in shrewd pick-ups the previous summer, but his wisest move was keeping Santamaria. When he does eventually leave this summer, it will be for around double what Villa offered in the summer.

Playing at the base of Moulin’s well-oiled 4-1-4-1, Santamaria’s combination of anticipation and work-rate makes him a godsend for Angers. He’s a smooth passer who can spread the ball with long passes, but who also knows when to circulate possession with quick, short passes.

His PB scores have been rising consistently throughout the season, and Angers recent three match winning streak sets them up nicely for a trio of very winnable fixtures against the relegation threatened Amiens and Toulouse and fellow mid-tablers Strasbourg. He could easily be in with a shout of some Performance Dividends over the next few weeks, and his improving performances already have several FI traders interested.

At 25 years old, he’s just entering his prime, and there’s no doubt that several clubs will be chasing after his signature this summer. The Media Buzz potential through summer and the more short-term favourable fixture list make him a prime candidate for a price rise in the coming months. 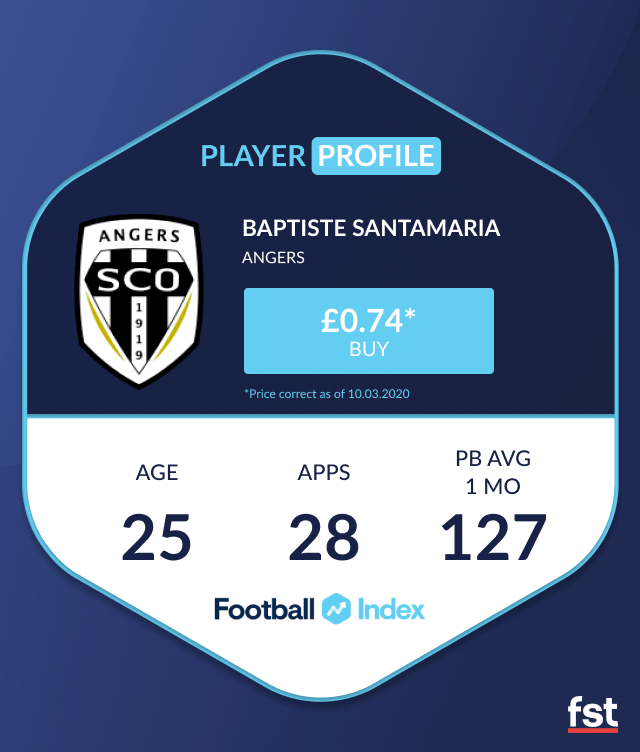 Make sure to check out our Football Index FAQ to learn everything you need to know about getting started on the platform. Once you’re set up, why not dive into the life of a successful trader with @GingerPirlo_FI’s weekly Football Index Tips, where he rounds up his week on the Index and gives some helpful pointers for the upcoming period.

Zach Lowy will also be bringing us some more of his underrated gems in the very near future too, so keep your eyes peeled!

If you’re still not satisfied, follow us on Twitter and keep an eye out for our upcoming expert Football Index Q&A

Zach Lowy is the co-creator of http://breakingthelines.com and also writes for numerous football outlets around the globe. Follow him on twitter for more threads, articles, and analysis of the beautiful game.