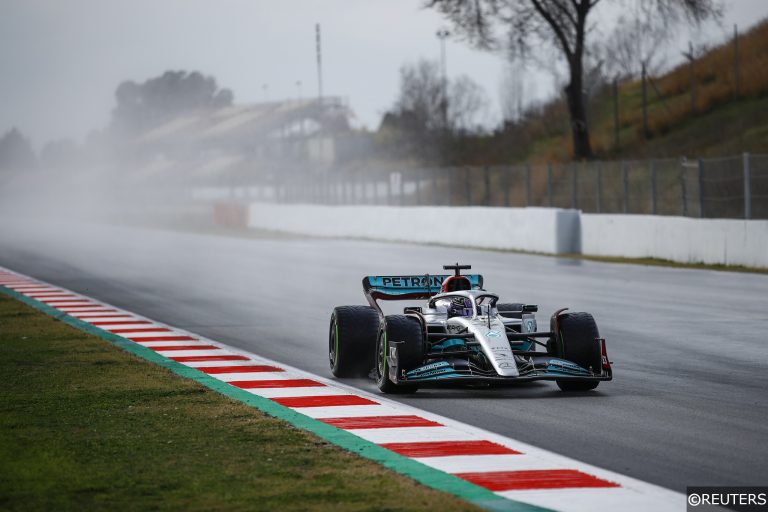 The most dramatic year in recent Formula 1 history was brought to the most controversial of conclusions in the final race in Abu Dhabi in December and with sweeping new regulations coming into effect 2022 promises to be full of twists and turns.

Unsurprisingly, the off-season has been dominated by talk about last year’s controversy but a pre-season runout in Barcelona allowed fans to look forward rather than backward and the final test in Bahrain last week has thrown up some interesting early stories.

Now, with the Bahrain Grand Prix and the start of the F1 2022 season just days away, we take a look at all the outright predictions and tips for the coming 23-race calendar.

Make sure to bookmark our Formula 1 predictions page for all the latest tips.

Most people are expecting another straight shootout between Lewis Hamilton and Max Verstappen this season and after testing that certainly seems the most likely outcome.

Red Bull and Ferrari looked the fastest in testing but if history has taught us anything it’s that you can never trust a Mercedes test.

They have sandbagged the car and played down their chances for years but always manage to pull it together in the end, whether that be by the first race of the season or through development over the course of the season.

This leaves the seven-time WDC-winning Lewis Hamilton as my favourite for a record-breaking eighth title.

The manner of Hamilton’s loss last year will have hurt and the last time that happened – back in 2016 – he came out swinging the next season, winning the title by 46 points and taking nine race victories.

George Russell’s arrival at Mercedes could be a positive for Hamilton, too. Valtteri Bottas was criticised last season for his inability to stand up to Verstappen in wheel-to-wheel situations and, while Russell won’t want to play second fiddle to Hamilton for long, he at least has the confidence to take the fight to the reigning champion.

Verstappen will be undoubtedly be a worthy contender but Hamilton has the experience and Mercedes have the infrastructure to deal with the regulation changes and that tips the scale towards the Brit.

Those looking for a bigger price to back could do a lot worse than Ferrari’s Carlos Sainz at 12/1.

Ferrari haven’t won a Constructors Championship since 2008 but pre-season testing injected a bit of hope into the romanticists among us.

They were close to Red Bull in terms of outright pace and the car looked stable and relatively easy to manage, which isn’t something Christian Horner can say about his car yet.

If they can take that testing success through to the Grand Prix, the door is open for a Ferrari driver to put in a challenge and Carlos Sainz is criminally underrated.

Charles Leclerc (7/1) is billed as their star but the 27-year-old Sainz put in a fantastic and consistent performance in his first year in red, outscoring his teammate by 5.5 points and taking the crown of best of the rest after the quartet of Mercedes and Red Bull drivers.

He finished in the points in all but two of the 22 races and stood on the podium four times, beating Leclerc in both metrics, and it’s that sort of consistency that can win titles.

After eight consecutive Constructors Championships, it’s amazing to see Mercedes anywhere near evens in the market.

Admittedly they didn’t have the best of pre-season tests, but the chances are they were sandbagging at least a little bit and the severe porpoising they were suffering is an issue they will be confident of fixing sooner rather than later.

The culture of improvement and perfection Toto Wolff has instilled at Mercedes has led to them winning six of the last eight titles by a margin of more than 100 points and, while they could face competition from both Red Bull and Ferrari this season, they have one of the best driver pairings going in Lewis Hamilton and George Russell.

As usual, Sky Sports F1 have the rights to all 23 races and each of them, including practice and qualifying sessions, will be broadcast live.

Fans looking for free-to-air coverage can watch extended highlights of qualifying and each Grand Prix on Channel 4, while they will also broadcast the British Grand Prix live.

What happened in F1 last year?

A fantastic performance by Red Bull and Max Verstappen in the first half of the season saw the young Dutchman build a commanding lead in the hunt for his first World Driver’s Championship, but a late charge from Mercedes put the pressure on Verstappen.

The season was riddled with dispute over whether Verstappen’s driving style was crossing the line or just hard racing and three successive Lewis Hamilton victories – in Brazil, Qatar and Saudi Arabia – saw the duo go into the final race level on points.

Verstappen led by virtue of having won more races but the title looked Hamilton’s to lose as he dominated the race. That is, of course, until Nicholas Latifi put his Williams into the wall with five laps remaining.

Race director Michael Masi – now removed from his role – made the unprecedented decision to allow only the lapped cars between Hamilton and Verstappen to unlap themselves before bringing the safety car in early. This left Verstappen directly behind Hamilton on fresh tyres for the final lap, with the Red Bull driver making an easy pass to take his first championship and leave the Mercedes garage enraged.

This leaves the World Drivers Championship in the hands of a non-Mercedes driver for the first time since 2013, although the Silver Arrows did extend their strangehold on the Constructors Championship to eight years.

What are these regulation changes?

Originally meant to be introduced in 2021, this season’s regulation changes have been billed as the biggest ever in Formula 1, with the new cars specifically designed to promote closer wheel-to-wheel racing.

Without going into too much technical detail, the main goal is to drastically reduce the loss of downforce the cars experience when in the so-called ‘dirty air’ of the car in front, which theoretically should allow the cars to follow one another more closely.

With each team effectively starting with a blank canvas, we’ve already seen some rather dramatic variations between the teams’ cars in testing and only time will tell which teams have moved in the right direction and which have led themselves into a dead-end.

Festival atmosphere at FST as 44/1 Cheltenham acca lands on Tuesday!