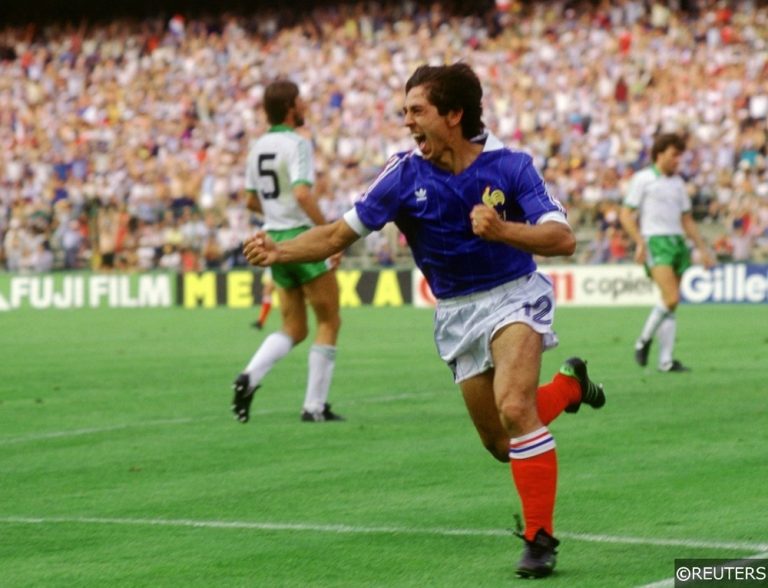 The second of our Best Ever World Cup XI’s is all about the 1998 hosts France. Known as Les Bleus, having won three major tournaments, France have been one of the big boys of international football for decades.

Unlike some of the other World Cup-winning nations, France can’t exactly be put into a specific box in terms of style, while they’ve only lifted the FIFA World Cup Trophy, but they have had plenty of fantastic players over the years, some of which have earned footballing immortality, and many of which have delivered memorable performances at the biggest tournament of all.

From maniacal goalkeepers to hard-hitting defenders, intelligent playmakers to explosive forwards, France have had the lot. Below we’ve had a stab at selecting a starting XI that we believe to be France’s best of all-time based largely on performances at the FIFA World Cup.

“Unconsciously, I fell in love with the small round sphere, with its amusing and capricious rebounds which sometimes play with me.” – Fabien Barthez

Julien Darui may have been voted as the best French keeper of the 20th century by L’Equipe back in 1999, but Fabien Barthez, who has kept the joint highest number of clean sheets at the World Cup, is almost impossible to overlook for the spot in between the sticks. The mercurial stopper won the tournament in 1998, conceding just two goals in seven matches, while he also donned the gloves when Les Bleus reached the final in 2006.

Named the French player of the year both in 1979 and 1981, full-back Maxime Bossis, who was capped 76 times by his country, rose through the ranks and earned himself a spot on the plane to Argentina in 1978, while the defender was also an integral part of France’s World Cup team in both 1982 and 1986.

Three times a winner of Ligue 1, a winner of the Coupe de France, not to mention a winner of the UEFA European Championship in 1984, Bossis made the left-back position his own both for Nantes and the national side. Between 1985 and 1992, the defender was France’s most capped player of all-time, while he also held the French record for matches played at the FIFA World Cup until 2006. 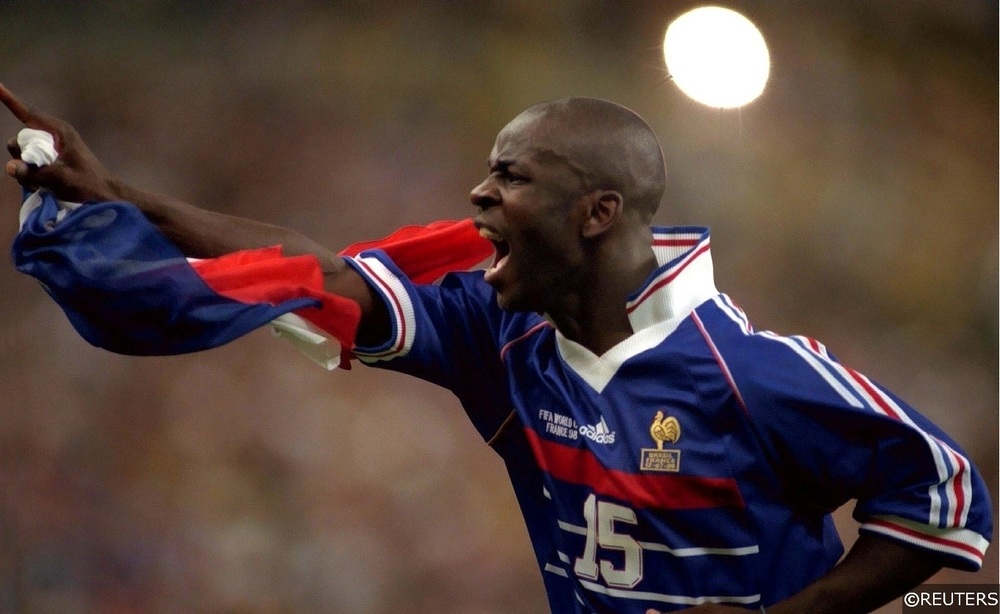 “He wasn’t the best player running with the ball, but for me he was certainly the best defender; you couldn’t pass him, it was impossible, he was a wall. Even if you came with two players and tried to pass him it was impossible, because he was very intelligent in reading the game. We could see that on the pitch, every time the opponent went into his area, they were a little frightened to be close to him because he was so tough.” – Emmanuel Petit

France’s most capped player ever, both a World Cup winner and runner-up, Thuram is perhaps most famous for scoring both goals, his only goals for Les Bleus, in France’s 2-1 win over Croatia in the semi-final of the 1998 tournament. The explosive wide defender is not only one of the best to don the shirt of the French national team, but simply one of the best full-backs to ever play the beautiful game.

A key player for European giants such as Juventus and Barcelona, Lilian Thuram had all the qualities required to be a full-bacl of the highest order and is a no-brainer in this line-up.

“Definitely the hardest player to come up against – it was nearly impossible to get past him because, for a player of his physique, he had incredible balance. It was always good to have him on your team, because he did the work of three men. He was so good that he filled his offensive players with confidence. You knew, with him on the pitch, you’d never get caught on the counter-attack.” – Brian Laudrup

Quick, strong, agile and the ideal player to have at the back when guarding against the break, Marcel Desailly is one of France’s most successful defenders having won both the World Cup and the European Championship.

Named in the 1998 FIFA World Cup All-Star Team, Desailly will always be remembered for the commanding performances that he delivered on route to lifting the prestigious trophy. France conceded just two goals on route to winning the famous tournament, and it’s fair to say that Desailly, who has the second most capped player for Les Bleus, played was crucial part of such defensive success.

Named by Pele in the FIFA’s 100, Marius Tresor is a defender who, despite not getting his hands on the World Cup, was certainly one of France’s greatest performers at the big tournament.

Having rose to prominence with Ajaccio before going on to star for Marseille during the 70’s, the rapid defender played a leading role for Les Bleus at the 1978 World Cup, while the Guadeloupian born centre-back was also one of France’s standout performers four years later in Mexico, where the French reached the semi-final stage.

To this day, Tresor, who was eventually capped 65 times by his adopted nation, is widely considered as one of France’s greatest ever defenders.

Part of the fabulous four dubbed Carré Magique, Alain Giresse shone for France at two World Cups during their first golden era back in the 80’s.

Standing at a mere five feet and four inches, the attacking midfielder, who became known for his extraordinary agility and speed off the mark, was a leading light for Les Bleus when they reached the semi-final in 1982, while the Frenchman was once again one of the main men, not to mention a key component of the famous Carré Magique (magic square), when his country made it to the last four in 1986.

Check out more of our content ahead of the World Cup, starting with this: Revisiting the Golden Age of the French National Team

Arguably the man who invented the position that is commonly known as the ‘free role’ nowadays, Raymond Kopa was one of France’s first ever superstars.

A part of the legendary Real Madrid team that dominated European football during the 50’s, Kopa was an attacking player who had quick feet, was adept at playing eye-of-the-needle through balls and had an eye for goal in his locker. Such attributes saw the playmaker star at the 1958 World Cup, where France were eventually eliminated in the semi-finals, losing to a Brazil team that contained a seventeen-year-old Pele.

During 1958, Kopa’s performances for both club and country were considered so impressive that he was awarded the Ballon d’Or, becoming the first of just four Frenchman to be presented with the prestigious trophy. 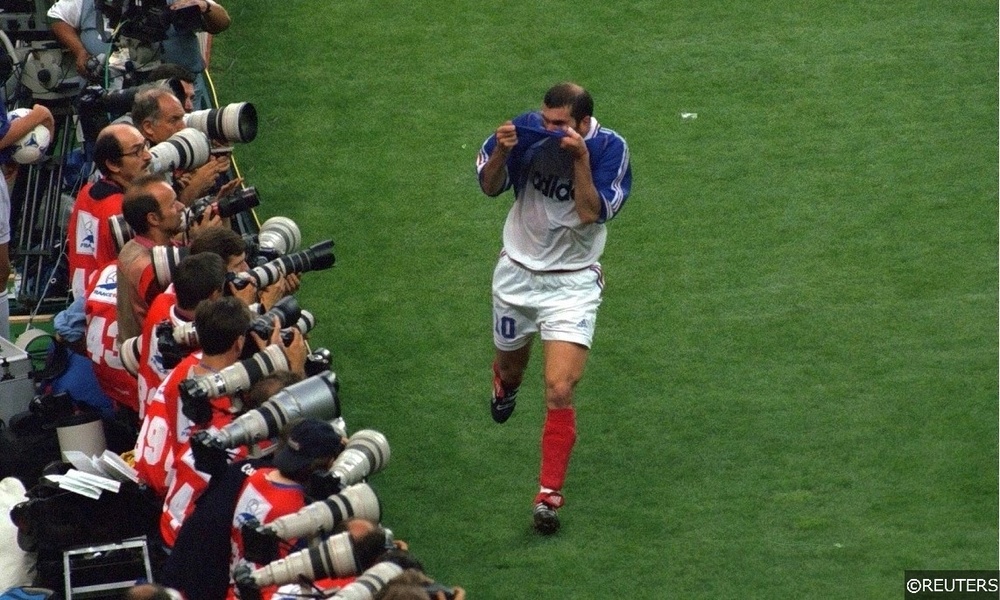 “He had skill and technical ability that were just out of the ordinary. When it came to control, and especially leading the team, he managed to see and analyse situations quicker than anyone else on the field. Thanks to that he made the difference.” – Marcel Desailly

One of the finest and most complete midfielders ever to play the game, Zidane was a player so outstanding that he would slot straight into any “Best XI”. Three times the FIFA World Player of the Year and once a Ballon d’Or winner, Zizou, as he became known, won just about everything from Serie A to La Liga, the Champions League to the European Championship, but it is perhaps his performance in the final of the 1998 World Cup that defines the midfield magician.

Both a World Cup Winner and World Cup runner-up, Zidane was a big player for France at the 1998 renewal of football’s biggest tournament. The player who was named as the best European footballer of the past 50 years back in 2004, spurred his team on in the final, scoring twice in a 3-0 win over the much-fancied Brazil.

“I played with Raul, Luis Figo, David Beckham, Roberto Carlos, but Zinedine Zidane was absolutely wonderful. Not only was he full of surprises during games but also in training. I’ve been in many training sessions in which other players have had to stop and applaud him. He did things I had never seen before; there was no other player who was so technically gifted. It was quite a sight to see him train.” – Fernando Morientes

“He didn’t run a lot like Cruyff and didn’t depend on his physique, but I liked how he was the brain organising things on the pitch. He was a player who used his head in the broader sense. The way he shone with France and Juventus, and his capacity for taking free-kicks, made him the European footballer of the 1980s.” – Pele

Perhaps Les Bleus’ best player of all-time, certainly their most individually decorated, scoring 224 goals in 432 career appearances, including five in total at World Cups, Michel Platini, is without a doubt one of the most accomplished players ever to grace a football pitch with his presence.

The three-time Ballon d’Or winner, who became known as one of the best exponents of the free-kick, was the leader of France’s famous Carré Magique at both the 1982 and 1986 World Cups. With his eagle-like vision and rapid thinking Platini controlled the game whenever he was on the pitch.

“Consequently, I won just about everything I set out to win, everything except the World Cup, of course. But even now, I don’t regret that, because I was part of a team which twice reached the semi-finals.” – Michel Platini

“Is he one of the all-time greats? Obviously. He’s the kind of player that you need forever.” – Jose Mourinho

A Premier League legend and arguably the best player ever to play for Arsenal, Thierry Henry was the most explosive, most devastating and most complete forward ever to pull on the jersey of Les Bleus.

Scoring an impressive 284 goals in 581 goals, Henry played some of his best football when wearing the national team shirt. The forward was one of France’s most impressive players at the 1998 World Cup, ending the tournament as their top-scorer, despite being just 20 years of age, while he eventually went on to become Les Bleus’ record goal-scorer with an impressive 51 goals at international level.

Perhaps a name far less known than the likes of Henry, Zidane and Platini, but a Best Ever France XI would not be complete without the incredible Just Fontaine.

The Moroccan born striker, who scored a staggering 227 goals in just 248 career appearances, remains one of the most prolific forwards ever to play the game, despite retiring over 50 years ago.

Having thrived for both Nice and Rennes, it was on the biggest stage of all where Fontaine really made his name. At the 1958 World Cup in Sweden, with Raymond Kopa supplying the service, the born finisher notched a remarkable 13 goals, which is still the record number of goals scored in a single edition of the tournament. Scoring two hat-tricks during the 1958 renewal, Fontaine is also the joint-holder of the record for most hat-tricks at the World Cup, as well as the joint-holder of the record for most consecutive matches with at least one goal (6).

To put Fontaine’s 13 goals at the 1958 World Cup into perspective, only once in 14 renewals of FIFA’s flagship event since has a player reached ten goals. If we think of the great forwards who’ve played at the World Cup in the last 60 years, it’s difficult to envisage the Frenchman’s record ever being broken.