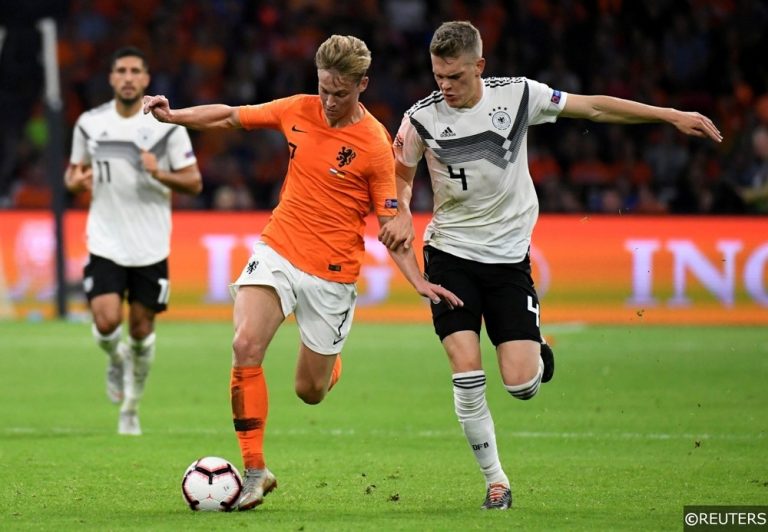 The biggest deal of the January transfer window so far was confirmed on Wednesday with Ajax midfielder Frenkie de Jong agreeing to join Barcelona for £65 million. The move won’t officially go through until the summer with de Jong set to stay put in Amsterdam for the remainder of the season but it still represents a major coup for the Catalan side, who have long chased the 21 year old’s signature.

De Jong is one of the most highly rated young talents in European football right now, having contributed to Ajax’s resurgence over the past couple of years. The midfielder has already won 5 caps for the Netherlands and has the potential to develop into perhaps the most complete midfielder of his generation. While it’s perhaps his vision and passing game that has attracted Barca, de Jong has the defensive qualities required to flourish in a holding role and has even been used as an emergency centre-back at times.

With the arrival of Frenkie De Jong we add talent, youth and Barça style to our sporting project. We are convinced that he will be a key part of our team for years to come. Welcome, Frenkie! pic.twitter.com/9HCHmrlqvj

This isn’t a transfer that has happened overnight. Barcelona have been strongly linked with Frenkie de Jong in the Spanish press for around a year with the Dutchman breaking through into the Ajax senior set-up last term. There was always a sense that they would eventually sign the player but interest from PSG and Manchester City this month has only accelerated their plans for a move and the Catalan giants will take satisfaction in having ultimately beaten two clubs for whom money is no real object.

Therefore Barcelona have not only snapped up one of the hottest properties in the world game but have sent out a bit of a statement too. Only last week, PSG were widely reported to have reached a deal for de Jong only for Barcelona to send a delegation, led by president Josep Maria Bartomeu, to Amsterdam on Wednesday to seal his signature.

It’s a notable coup for the Barca board, who have come under increasing pressure, particularly having missed out on the signing of Antoine Griezmann last summer. The fee is said to be in the region of £65 million, which on the surface appears to offer better value than Barca’s recent big money signings Ousmane Dembele and Philippe Coutinho, both of whom cost in the region of £100 million. With Coutinho struggling to claim a regular starting berth twelve months on, the fee is no guarantee that de Jong will go straight into the team but clearly he is a player who Barcelona believe is going to develop into a key part of their plans for many years to come.

Frenkie de Jong will be the 20th Dutchman to play for Barcelona and he joins some pretty impressive company. The likes of Edgar Davids, Marc Overmars, Patrick Kluivert and the de Boer brothers have all represented the Catalan giants over the years. A host of Dutch players have cemented themselves as Barcelona legends having initially come through the famed Ajax academy and the most important figure in the modern history of the club also made exactly the same move as the one de Jong will eventually make this summer.

Johan Cruyff twice left Ajax to join Barcelona, as a player in 1973 and again as a coach in 1988. His eight year stint in charge of the Catalans delivered the club’s first European Cup and laid the blueprint for the passing style that has become such a part of the club’s modern identity.

Of the 19 other Dutchmen who Barcelona have signed, Frenkie de Jong is the one who perhaps most closely fits the Cruyff mould and his move will delight many Barca fans, who believe that the Cruyff school of thinking has gradually been eroded from the team’s play in recent years. De Jong adds a fascinating new chapter into the long tale of Barcelona’s Dutch connection but he is following in some sizeable footsteps and there will be pressure on the 21 year old from the off.

How might de Jong fit in at Camp Nou?

85% – Since his Eredivisie debut for @AFCAjax in Feb 2017, Frenkie de Jong has the best dribble success rate of all players in the Eredivisie with 50+ attempts. Outgrown. pic.twitter.com/2WmUmxGsja

It will be close to eight months before we see Frenkie de Jong in a Barcelona shirt, at least in a competitive setting. It seems probable now that Ernesto Valverde will continue next season but a lot can still happen in that time so it remains to be seen exactly how de Jong will fit in.

He is clearly a versatile midfielder, with strong defensive and creative attributes as well as an impressive dribbling ability which will add to Ernesto Valverde’s options but de Jong will certainly face a battle to get into the side. Sergio Busquets is effectively a guaranteed starter and is likely to remain so for the next couple of years at least although de Jong perhaps offers a more natural back-up option than what they currently have to choose from. De Jong clearly is capable of playing alongside Busquets with more license to roam forward but he will face stiff competition from the likes of Ivan Rakitic, Philippe Coutinho, Arturo Vidal, Rafinha and Arthur, who are also battling for central midfield roles.

From a purely numbers perspective, it seems almost certain that a couple of those players will now leave this summer, particularly with highly rated young midfielders Riqui Puig and Carles Aleñá emerging from the Barcelona academy. Either way the bid to find long-term replacements for Xavi and Andres Iniesta, has certainly stepped up a gear or two this season. It’ll be interesting to see which of the young midfielders can step up and really force their way into this side over the coming years.

De Jong is in theory as well equipped as anyone to do that but with Arthur earning rave reviews and early comparisons to Xavi, competition will be fierce. The signing of both players certainly suggests Barcelona do want to return to a style more reminiscent of the one developed by Cruyff and later perfected by Guardiola. That may ultimately have consequences in terms of the next coach they appoint but for now Valverde is seen to be doing a reasonable job, with Barca strong favourites to win La Liga again. He could have some real selection headaches next season though with de Jong adding to a wealth of midfield options.