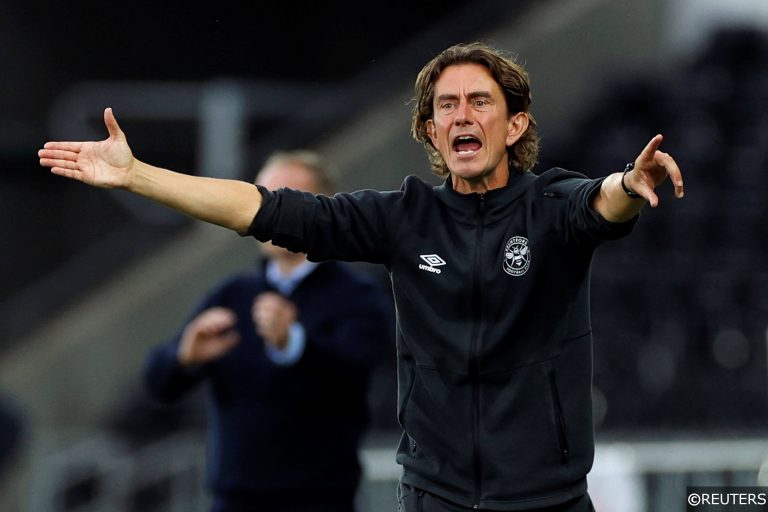 Dreams will be simultaneously dashed and realised when Brentford and Fulham meet to contest what has been dubbed “the richest game in football”, in Tuesday evening’s Championship Play-off Final at Wembley Stadium.

For the victors, a place in next season’s Premier League awaits along with the extraordinary financial windfall that comes with it, though the vanquished side will see an entire campaign of good work washed away in tears of defeat.

Fulham, who were relegated from England’s top tier just last year, have been Premier League combatants for 14 separate seasons since 2000, however, with Brentford aching for a taste of elite English football for the first time, the Cottagers could find that the Bees possess a sting too powerful to deflect.

Ahead of what promises to be a compelling evening of action at Wembley, we’ve put together a tasty looking five-part #OOT selection with Betfair for the Championship Play-off Final that comes in at a whopping 100/1!

But before we dive into our Odds on That selections, make sure to check out our more detailed Brentford vs Fulham predictions here for further analysis.

Want to add FST’s 100/1 selection straight to your betslip? Check it out below:

Desperate to earn a place in the Premier League for the first time, Brentford will arrive at Wembley doubly determined not to let this opportunity of a life time pass them by.

The Bees had looked a little off-colour in some of the end of season endeavours, including their play-off semi-final first leg defeat at Swansea on July 26, though their 3-1 triumph over the Swans in the return fixture was a joyous return to form for Thomas Frank’s exciting team.

Brentford, who beat Fulham both home and away to nil during the regular Championship season, have the star quality in the final third to complete a hattrick of victories over the Cottagers this week.

Brentford’s Saïd Benrahma was involved in 306 open play sequences which ended with his team having an attempt at goal in 2019/20, at least 57 more than any other player in the division – figures that highlight just how devastatingly effective the Algerian has been this term.

The 24-year-old opened the scoring for the Bees when they beat Fulham 2-0  back in June, and though the technically gifted attacker has gone five matches without a goal, his seven-strike haul since the campaign resumptions is still an impressive return.

It’s also worth noting that Benrahma set up both of Brentford’s other goals against the Cottagers in their brace of Championship meetings this season, and having been a match-decider against Fulham twice already this term, the ex-Nice star can make his mark again.

Brentford and Fulham’s regular season Championship clashes in 2019/20 averaged 10.0 corners per 90 minutes – numbers that were in keeping with the corners pattern that ran throughout their entire campaigns.

Both clubs ranked in the top five for average corners won per game this term, while their total corners figures per contest both came in at over 10.0 per 90 minutes respectively.

With both Brentford and Fulham expected to push for victory from the off on Tuesday, we anticipate that same total corners ceiling being pushed through again at Wembley Stadium.

Cyrus Christie to be carded

Republic of Ireland international right-back Cyrus Christie will be preparing for a busy evening against Brentford’s BWM strike-force of Said Benrahma, Bryan Mbeumo and Ollie Watkins.

Christie is prone to a mist-timed tackle or two, as evidenced by his haul of six yellow cards in just 15 Championship starts this season, and we think another caution could be on the way for the 27-year-old.

Christie will be manning the flank that the aforementioned Saïd Benrahma likes to raid down, and the 24-year-old Algerian is among Brentford’s most fouled players this term.

Christian Nørgaard to be carded

From an overall statistical standpoint, Brentford are among the Championship’s best-behaved clubs this season, though midfield destroyer Christian Nørgaard seems cut from a different clothe than his teammates.

The hard-hitting Dane has been booked a bone-crunching 10 times in the league already in 2019/20, and the 26-year-old has been committing more fouls (1.8) per game on average than any of his Brentford teammates across the campaign.

On a tense Championship Play-off Final battleground, Nørgaard’s combative qualities will be key to the Bees’ chances of success, and with the tables expected to fly, the Danish anchorman is a prime candidate to be shown yellow again.