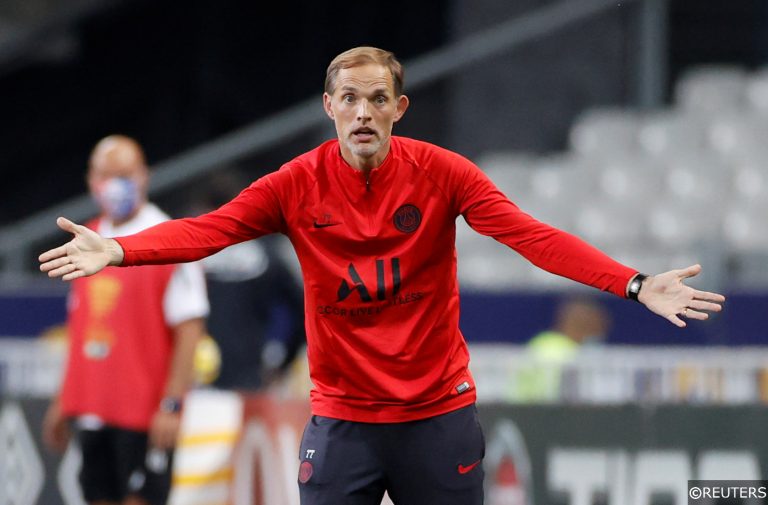 RB Leipzig’s incredible Champions League adventure continued when they ousted a battle-hardened Atletico Madrid outfit in the competition’s quarter-finals, though the continental greenhorns face another of the tournament’s big-hitters in the semis this week.

After years of Champions League disappointment, Paris St. Germain will feel that 2020 represents their biggest chance to land the trophy they so desperately crave, though the Parisians must overcome their own psychological hurdles along with their impressive German opponents to qualify for their first ever UCL final.

Tuesday’s clash also pits two of football’s keenest tactical minds against each other in compatriots Julian Nagelsmann and Thomas Tuchel, and the young German coaches’ strategical skirmish is just one of a huge number of fascinating individual duels to look forward to on Tuesday.

Ahead of what promises to be an enthralling night of action in Portugal, we’ve dived deep into some research to surface with this lovely looking #OOT, and remember that you can find all our Champions League predictions here.

For a more detailed analysis of Tuesday’s semi-final, check out our expert’s RB Leipzig vs Paris St. Germain predictions here.

RB Leipzig might be largely untested at this level, however, Die Roten Bullen looked tactically and technically superb in their excellent victory over Atletico Madrid in the quarter finals.

Traditional Bundesliga behemoths Bayern Munich and Borussia Dortmund were the only teams to conquer Julian Nagelsmann’s side in 19 RB Leipzig fixtures since February 1, while just one defeat in nine Champions League matches so far this season also highlights their tough to crack exterior.

PSG were perhaps a little fortunate to snatch a victory late on in their quarter final bout with unfancied Serie A competitors Atalanta, and the Ligue 1 champions showed enough moments vulnerability to suggest a more rounded RB Leipzig can avoid defeat against them on Tuesday.

While RB Leipzig’s defence could certainly never be described as porous, their record of keeping just two clean sheets in nine Champions League attempts this season indicates that a shutout against PSG this week is extremely unlikely.

The pretty attacking patterns RB weave at the other end makes them dangerous and consistent goal getters however, as evidenced by their run of scoring in all but one of their UCL assignments this term.

PSG meanwhile, shipped two goals in three of their last five continental run outs, and the Parisians’ habit of leaving the door unlocked at the back should ensure that RB Leipzig have chances to register at the Estadio da Luz.

Remarkably, the Ligue 1 heavyweights haven’t failed to score at the right end in the Champions League since 2016 however, maintaining a scoring run of 33 straight games that we expect to continue tomorrow.

The statistics in the section above also make an over 2.5 goals inclusion a no brainer for Tuesday’s potentially thrilling semi-final.

Over 2.5 goals rattled the net in six of RB Leipzig’s nine Champions League contests so far this season, while PSG also saw a minimum of three goals scored in six of their nine tournament matches to date.

Paris St. Germain in fact, have been one of the competition’s most consistently exciting teams to catch live over the past few seasons. Since 2017, their Champions League matches have averaged a whopping 3.93 goals per 90 minutes, and their semi-final encounter with RB Leipzig on Tuesday has all the makings of another white-knuckle ride.

Kylian Mbappe was only deemed fit enough to feature from the substitute’s bench in PSG’s quarter final against Atalanta, though the French international’s introduction on the hour mark was key to the Parisians’ revival and eventual victory.

The 21-year-old is certain to feature from the start in Tuesday’s semi-final however, and Mbappe’s phenomenal goal-scoring numbers this season scream that the World Cup Winner is a prime candidate to get his name in lights again this week.

With 18 goals in 17 Ligue 1 stars, and five goals in just four Champions League starts, Mbappe has been showcasing his lethal finishing skills in style during the 2019/20 campaign, and we’re tipping the Bondy-born sensation to maintain his incredible strike-rate against RB Leipzig.

Spanish fullback Juan Bernat is one of PSG’s most reliable performers, though the 27-year-old is prone to picking up a yellow card or two.

Bernat was carded in each of his last two Champions League run outs against Borussia Dortmund and Atalanta respectively, and the ex-Bayern Munich star was cautioned a noteworthy three times in eight UCL appearances overall this season.

In Ligue 1, the diminutive defender was booked five times in just 16 starts for Thomas Tuchel’s team, and against a fast-moving and forward-thinking RB Leipzig side this week, Bernat could tackle his way into trouble again.