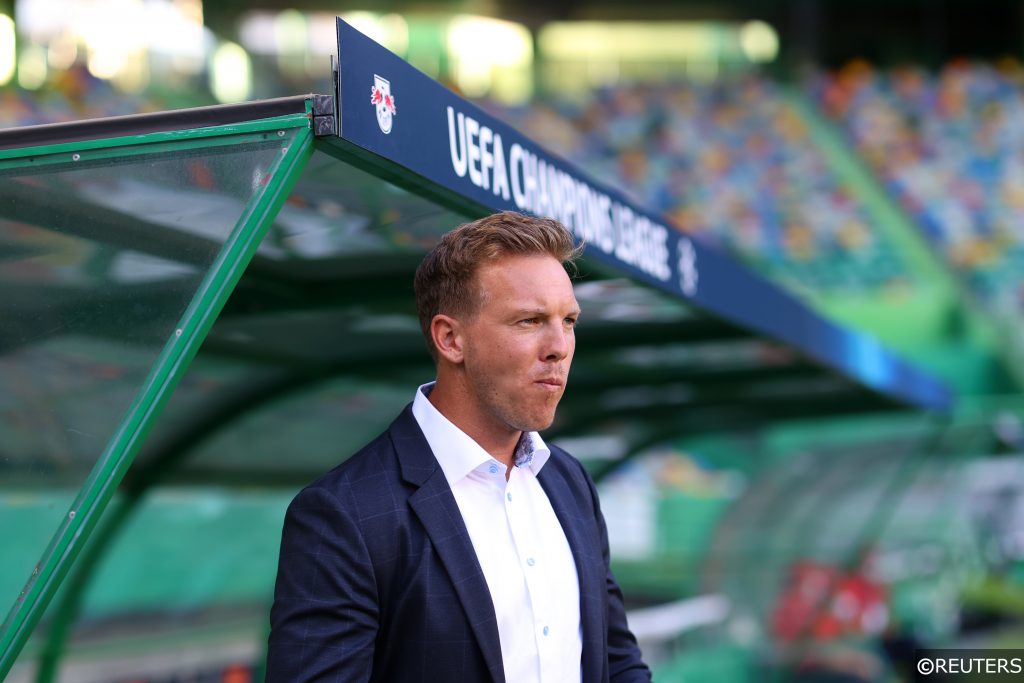 Manchester United broke hearts in the city of love last week with a surprise 2-1 win over last season’s beaten Champions League finalists PSG at the Parc de Princes, though the Red Devils could find it more difficult to take the fizz out of their next continental opponents – RB Leipzig.

The slick German outfit – who arrive in Manchester as Bundesliga league leaders – made it to the last four of the previous competition, and their hard-pressing, high-energy style under Julian Nagelsmann marks them out as a dark horse to watch out for again in 2020/21.

Ahead of what promises to be an intriguing night of Champions League football at Old Trafford, we’ve put together a cracking looking 50/1 #OddsOnThat special with Betfair for Manchester United’s clash with RB Leipzig.

Check out our selection below! You can find a more detailed analysis of the game, alongside our expert’s betting tips for the match in our Manchester United vs RB Leipzig predictions.

RB Leipzig to Win or Draw

Manchester United’s problems at Old Trafford have been well-documented, and while they remain formidable on the road, winning at the Theatre of Dreams has proved difficult for Solskjaer’ side.

Ahead of their encounter with RB Leipzig, United’s record shows just one win from their previous six fixtures in the red half of Manchester, while a haul of just one point from three Premier League outings there makes for equally grim reading.

RB Leipzig meanwhile, are unbeaten so far this season, winning six of their seven assignments overall since the start of their campaign in September. In the Champions League, Die Roten Bullen were turned over just twice in 11 games over the past 12 months, and we think the tactically innovative Germans can enhance that record at United’s expense.

Marcus Rashford proved again last week that he is Manchester United’s man for the big occasion, with a sumptuous late winner rocket against PSG – a strike that followed hot on the heels of another well-taken effort at Newcastle.

The 22-year-old is playing with a huge amount of confidence right now, and as United’s primary goal-threat, Rashford is worth backing to get his name in lights again.

Portuguese schemer Bruno Fernandes rarely passes up an opportunity to let fly, and the 26-year-old’s penchant for shooting from all angles is reflected in his numbers for the season so far.

Fernandes ranks joint top at United for average attempts per game in both the Premier League (2.6) and Champions League (4.0) this term, and the ex-Sporting skipper will be desperate to test RB Leipzig keeper Péter Gulácsi as often as possible on Wednesday.

Set-piece specialist Fernandes hit two shots on target for United in Paris last week, and we’re backing him to match that total at the very least at Old Trafford this week.

Dayot Upamecano to be Carded

A rumoured transfer target for Man Utd, Dayot Upamecano will be out to impress this week, and while the Frenchman is considered one of football’s most promising defenders, his disciplinary record is far from perfect.

The 22-year-old – who collected nine bookings last season – has already picked up three yellow cards in just six appearances in 2020/21, gathering two in the Bundesliga and one in his first Champions League runout of the new campaign against Istanbul Basaksehir last week.

Remarkably, Upamecano was cautioned in each of RB Leipzig’s three Champions League group stage away matches last season – a record that suggests the centre-half is one to keep an eye on in the cards markets for Wednesday.