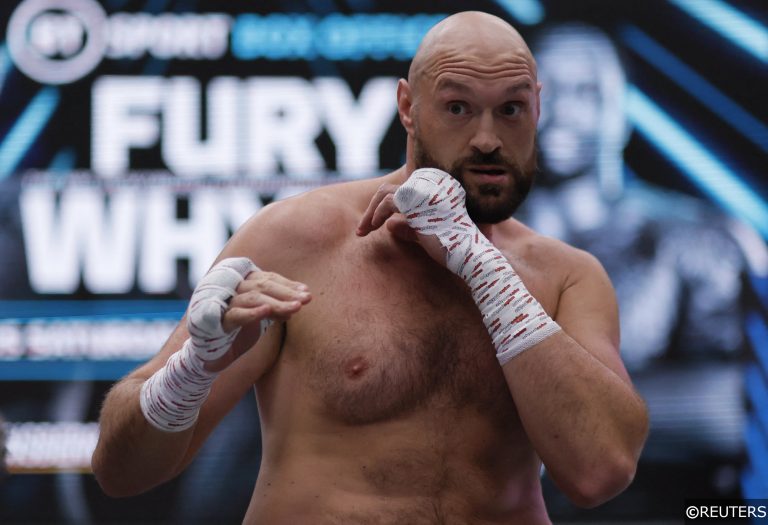 The World Cup in Qatar may be dominating the sporting headlines right now but heavyweight boxing takes centre stage after the games have finished on Saturday – as Tyson Fury defends his WBC world title and completes a trilogy against Derek Chisora.

Admittedly, this isn’t the fight most of us wanted to see as a potential showdown between Fury and Anthony Joshua fell through. A unification battle with Oleksandr Usyk is likely to happen next year, meaning Fury has turned his attention to an opponent he has already beaten twice. Chisora probably wouldn’t have been the third choice for most fans either but Del Boy always brings maximum effort and a win over Kubrat Pulev last time out suggests he still has plenty to offer at the elite level.

We’ve got the big fight covered and an 11/1 accumulator covering the undercard.

Where to watch Fury vs Chisora 3

The fight is taking place at the Tottenham Hotspur Stadium in London on Saturday December 3. The ring walks are planned for 9.15pm and the fight itself is expected to start around 20 minutes later.

The fight will be broadcast on BT Sport Box Office and will cost £26.95 with coverage of the full card starting at 6pm, while live streaming is also available via the BT Sport website.

Who is on the Fury vs Chisora 3 undercard?

When Fury and Chisora first met back in 2011 both were undefeated and the latter was in fact the pre-fight favourite. The Gypsy King ultimately claimed what was a comfortable unanimous decision victory and three years later he backed that up with a 10th round stoppage, as Chisora’s corner threw in the towel.

Chisora never really came close in either of those contests and since then Fury has improved, with his two stoppage wins over Deontay Wilder demonstrating he has become a far more powerful puncher than he was earlier in his career. In contrast, Chisora looks to be coming towards the end of his own storied career and this may well prove to be the 38-year-old’s final world title shot.

This fight could follow a similar pattern to Fury’s win over Dillian Whyte, where he secured a sixth round stoppage after a fairly cagey opening. ‘War’ has only been stopped three times in his career and remains a dangerous and durable fighter, Fury is unlikely to take any risks early on but should wear down his opponent as the clash progresses so backing the WBC champion to win in rounds 7-12 at 6/4 looks a solid option for this all-British heavyweight match-up.

Tyson Fury to win in rounds 7-12 vs Derek Chisora

Daniel Dubois to win in rounds 1-4 vs Kevin Lerena

Daniel Dubois has picked up three successive stoppage wins since a damaging loss to Joe Joyce and he can continue that fine run with an early finish against South Africa’s Kevin Lerena.

‘Dynamite’ Dubois has won 17 of his 19 fights inside the distance, with just one defeat, and 15 of those have come in the first four rounds.

There is a European lightweight title fight on the card as Ukrainian Denys Berinchyk comes up against Yvan Mendy.

Berinchyk is unbeaten after 16 fights and should have too much for Mendy, but the Frenchman is an experienced professional who has never been stopped so a points win for the challenger appeals.

Fury’s friend and training partner Isaac Lowe is on the the card against Sandeep Singh Bhatti. Lowe is on the comeback trail after back to back losses and this looks a very winnable assignment, but the featherweight has only managed six stoppage wins in a 26-fight career and as this is just a six-round affair he may well need the judges to claim a win.