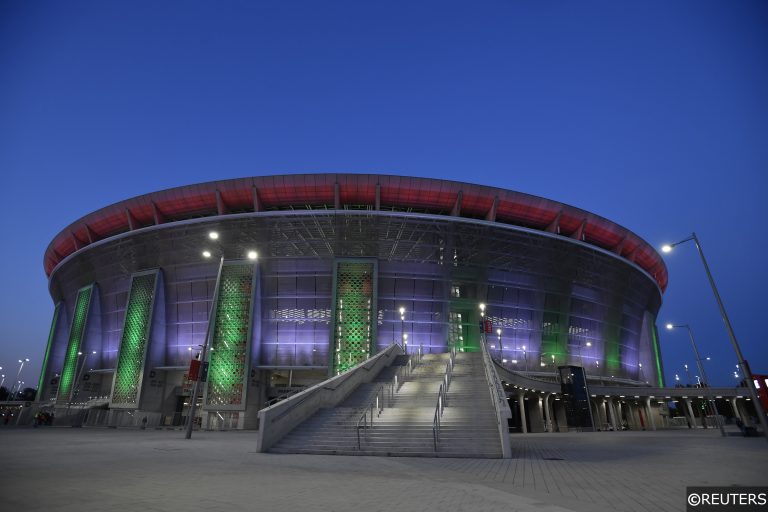 The Europa League group stages begin on Thursday and we’ve picked our winners for each of the eight groups.

Due to the mid-season World Cup, this season the group stages come to a close on November 3, meaning this looks set to be an incredibly tense battle as the teams involved bid to reach the knockout stage.

Arsenal have been drawn in Group A and it looks to be a two-way battle between the Gunners and Dutch outfit PSV for the top spot.

PSV managed to overcome Monaco in Champions League qualifying but then fell short against Rangers. Arsenal should have the quality to come through as group winners if they take the competition seriously. There is a danger boss Mikel Arteta will rotate for Europe but he should still name a strong starting XI for the two games against PSV and as such it is hard to look beyond the Londoners.

Group B looks like a competitive group and even Cypriot outsiders AEK Larnaca shouldn’t be underestimated after ousting Serbian and Ukrainian opposition in qualifying.

Dynamo were well beaten in Champions League qualifying by Benfica and have lost their opening two league games so are perhaps best avoided.

Rennes are the slight favourites, but it could be worth backing Turkey’s Fenerbahce to take top spot despite the fact they were beaten by Kyiv in the early rounds of Champions League qualifying. Fener have an excellent home record and haven’t lost a competitive game at Ulker Stadyumu since February. If they can take maximum points in their home games, that may well be enough to see them finish at the top of the pile.

Roma and Real Betis are the favourites to progress from Group C and it does look as if they fight for top spot will be a two-way fight between the Serie A and La Liga clubs.

The Giallorossi are the odds-on favourites to finish at the top of the table, but it could be worth siding with 15/8 underdogs Betis in this match-up. Roma should be able to qualify for the knockout stages and after winning the inaugural edition of the Europa Conference League last term they look good candidates to go all the way and reach the final at the Puskas Arena in Budapest.

However, Jose Mourinho’s side do tend to draw a lot of games and they may well drop points against Ludogorets and HJK, while Betis have started the season strongly with three wins in four games – and they were competitive in a 2-1 defeat to heavyweights Real Madrid – so the Spanish side look well placed to make a strong start to their European adventure by finishing ahead of Roma in the first round.

Group D may prove to be the ‘group of death’ in this season’s Europa League and you could make a real case for all four teams to finish in top spot.

That said, Germany’s Union Berlin are justifiable favourites after an unbeaten start to the season, including a draw with Bayern Munich. Union did fall at the first hurdle in the ECL last season but that was clearly a low priority for the club, and if they take the competition seriously they should finish ahead of Braga, Malmo and Union SG.

Manchester United find themselves in Group E and the fight for first place is likely to be between themselves and Spanish outfit Real Sociedad, with Sheriff and Omonia battling it out for third and a place in the ECL.

Unsurprisingly, United are the favourites but it could be worth taking a punt on 2/1 underdogs La Real here. Old Trafford boss Erik ten Hag is likely to rotate for this competition, certainly in this early stage as the Premier League is a clear priority, and that could leave them vulnerable. United are also a real scalp for both Omonia and Sheriff, and the latter have form against Europe’s big guns after stunning eventual winners Real Madrid in the Champions League group stages last year.

The Europa League will be more of a priority for Sociedad and as such they look good value to pip United to top spot.

Lazio are the favourites to top Group F and this may be a more competitive battle than the odds suggest.

ECL runners-up Feyenoord shouldn’t be overlooked and Midtjylland and Sturm Graz will both feel they are capable of claiming a top two place, but ultimately Lazio should have the quality to come through in first place.

The Rome outfit finished second in their group in the Europa League last season but they only lost once, at Galatasaray in a game where they dominated for large periods, and as they’ve been placed in what on paper looks a weaker group this year they should be able to finish in first.

Freiburg look worthy favourites in Group G and they can come out ahead of Olympiakos, Nantes and Qarabag. Nantes have made a poor start to the season in France and Olympiakos struggled through qualifying, winning on penalties against Slovan Bratislava and Apollon after they were dumped out of Champions League qualifying by Maccabi Haifa.

Indeed, outsiders Qarabag may prove to be Freiburg’s biggest rivals but the Bundesliga club look a good option to take top spot after winning four of their five domestic league games so far.

Group H is another competitive looking group but Monaco are the clear favourites to finish in top spot at 5/6. However, the Ligue 1 club have made a disappointing start to the season, falling short in Champions League qualifying and winning just two of their seven games across all competitions, so it may pay to look elsewhere.

At a big price, Serbia’s Crvena Zvezda, aka Red Star Belgrade, have real appeal due to their exceptional home record. Red Star have lost just one competitive home game since November 2019 and if they can make the most of their fixtures at the Stadion Rajko Mitic they could pull off a minor upset and finish in pole position ahead of Monaco.