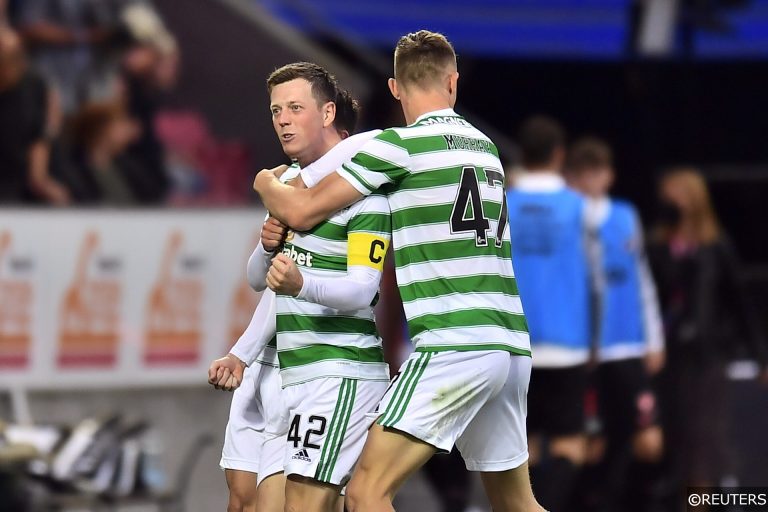 The race for qualification to the Europa League group stages continues to gather pace and this Thursday 12 teams are battling it out for a spot in the Europa League Playoff round, including Celtic and St Johnstone.

Below you can find tips and predictions for all six of these fixtures, and if you’re after more betting advice head over to our football tips page for all of today’s accumulators.

These two were rather cautious in last week’s reverse fixture, with the game ending in a 0-0 draw and setting up the return leg in Armenia nicely on Thursday.

The Armenian side, Alashkert, have made a slow start to their season, losing their first league game 3-0 to Ararat-Armenia on the back of two defeats in the Champions League Qualifiers.

Kairat Almaty, on the other hand, have fitness as their main advantage. They are midway through their season in Kazakhstan, sitting a very comfortable third and nine points clear of their nearest pursuers.

The Kazakh side gave Red Star Belgrade a scare in the Champions League Qualifiers with a 2-1 win in the home leg. They went out following a heavy defeat in the return but they clearly have more quality than the draw last week suggests and they should clinch a win in Armenia.

This tie is currently balanced on a knife’s edge following the 2-2 draw in the first leg and there it’s no certainty that odds-on favourites HJK can get the job done in Helsinki.

The Finnish Champions are currently cruising towards their 31st league title with a nine point lead and while they have the match fitness to help them through the visiting Baku boys are no slouches.

The home side are going to be favourites for the game, but the Azeri’s should not be discounted fully. HJK have conceded in four of their last five European ties and Neftchi went on a wonderful streak towards the end of last season, ultimately winning the league on the final day.

They beat rivals Qarabag with a last gasp goal to clinch the title and have scored in three of their five European matches this term, although they did concede in all of these so a tight score draw looks the best value for money.

This game ended in a stalemate in Slovenia as both teams looked unwilling to take too many risks but with the home advantage on their side this Europa League tie is Zalgiris’s to lose.

The hosts lead the Lithuanian league by a point and boast a game in hand on their nearest rivals. Their only defeats this summer came against Ferencvaros of Hungary in the Champions League qualifiers. They were seriously up against it in that tie but Thursday’s fixture should be much more manageable, especially against a Mura side winless in their last seven competitive games.

FC Mura sit second-bottom in the Slovenian Premier League following this seven-game winless streak and with just five goals scored in this period they do not look an appetising choice. Expect a tight game, but Zalgiris should have enough to progress.

Rapid Vienna will come into this game with a shade of comfort after a 3-0 first leg win, with that victory also seeming to ignite their previously misfiring league campaign.

They had to wait until their third game to pick up a win domestically but seem to be on the right track now after a 3-0 triumph over Wolfsberger at the weekend. That makes it two wins to nil in a row and four of their last five competitive victories have come without a goal conceded.

Anorthosis will be hoping they can turn around their performance from the first leg and from the Cypriot Super Cup defeat to Omonia but it’s not looking likely for the underdogs.

Four of their last eight competitive games have ended in defeat and three of these have been by a 2-0 scoreline, so the stronger Austrians should wrap things up easily in Larnaca.

St Johnstone battled to an unlikely draw at Galatasaray last week and with the Turkish side missing their number one goalkeeper and captain Fernando Muslera they have a great chance of pulling off an upset here.

Callum Davidson’s men won both domestic trophies in Scotland last season and are unbeaten in eight cup matches. All three of their games this season have ended all square and with Gala conceding in 11 of their last 14 games another 1-1 draw could be on the cards.

A 4-2 win in the Czech Republic last week has put Celtic in the driving seat and another comfortable victory is on the cards for The Bhoys.

They demolished Dundee 6-0 at the weekend and six of their last seven competitive wins have been by more than a single goal, while Jablonec are winless in three and have shipped nine goals during this relatively short period.

The hosts are unbeaten in nine competitive home games and it would be a shock to see anything other than a Celtic win on Thursday.