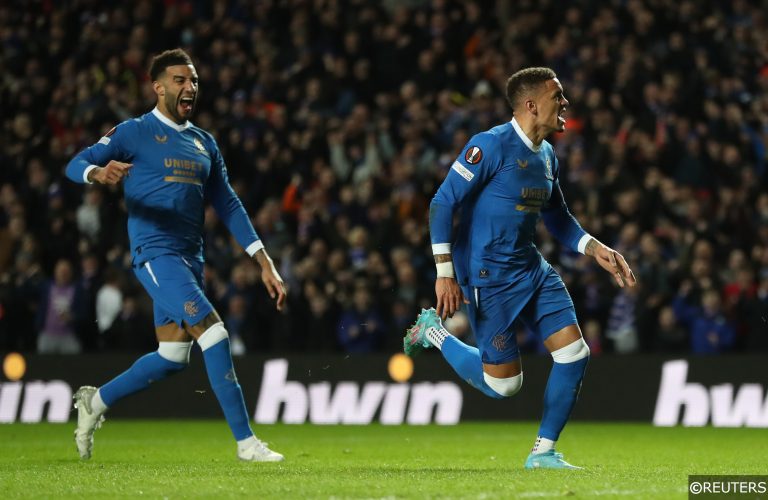 The Europa League final takes place on Wednesday as Scottish giants Rangers take on Eintracht Frankfurt in the showpiece fixture at the Ramon Sanchez-Pizjuan in Seville, Spain.

Finals can be cagey affairs but this competition has thrown up a few classics in recent years.  Both teams have scored in five of the last seven finals, while there have been at least four goals scored in four of those.

As such, we’re hoping for plenty of action at both ends of the pitch when Rangers face off against the Bundesliga outfit and have put together a huge 282/1 five-selection Ultimate Bet Builder tip to reflect this.

Read on to see what we’re backing in the Europa League final and to back our huge bet!

As mentioned above, over 3.5 goals has been a winning bet in four of the last seven Europa League finals and there are a few other reasons to expect a high scoring affair on Wednesday.  Rangers have already faced German opposition twice in the knockout stages of this competition and in three of their four games against Bundesliga teams at least four goals have been scored.

Frankfurt have played out a five-goal thriller on Spanish soil in this competition having claimed a 3-2 win at Barcelona, and over 3.5 goals has been a winning bet in three of their last eight games overall.

James Tavernier has been sensational for Rangers in this competition and he is the tournament’s top goalscorer with seven to his name ahead of the final.  Tavernier has scored in each of his last three games and was left on the bench against Hearts at the weekend to ensure he is fresh for this final.  Tavernier managed three goals in Rangers’ two games against Borussia Dortmund and one in the double-header with RB Leipzig, and he can grab another goal against a German club when the Ibrox outfit face off against Die Adler.

While Tavernier has been Rangers’ talisman, Frankfurt have been aided by the goals of Japanese midfielder Daichi Kamada and he also stands out as a potential anytime scorer.  Kamada has five Europa League goals to his name and he has enjoyed his trips to Spain, scoring at Betis and managed an assist in the game at Barcelona. Kamada was on target at West Ham in the semi-finals and can follow that up with a goal in the final.

Ansgar Knauff to be shown a card

Ansgar Knauff has been booked twice in 18 appearances for Frankfurt since joining on loan from Dortmund and both of those yellow cards have come in this competition.  Knauff is averaging 2.5 tackles per-game and 2.0 fouls after six appearances in the Europa League, and at a big price looks a good contender to be shown a card in Seville.

Almamy Toure to have one or more shots on target

Frankurt defender Almamy Toure has been happy to get forward in the Europa League and is averaging 0.9 shots-per-game, compared to 0.6 in the Bundesliga.  Toure is fairly accurate with an average of 0.3 shots on target per-game and he can test the keeper at least once in what could well be an end-to-end final.

View All Today’s US Sports Tips