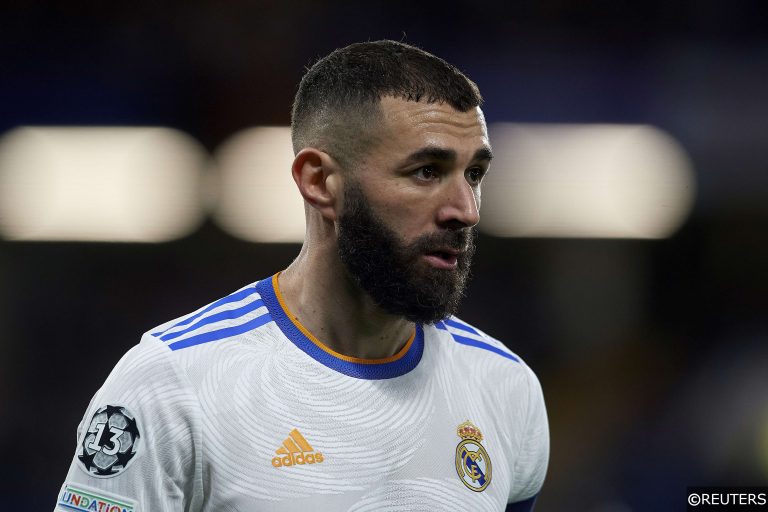 With the top-flight domestic season over in the majority of Europe attention now turns to the biggest remaining prize on offer as Liverpool face Real Madrid in the Champions League Final on Saturday.

Ahead of this clash of the titans in Paris, we’ve collated the views of seven experts as we look to build the perfect bet for Saturday.

All seven of our experts plumped for over 2.5 goals thanks to both teams incredibly attacking talent and Real Madrid’s fragility at the back.

Opinions were only a little more divided when it came to the players set to score these goals, with Karim Benzema taking four of the seven votes and Mo Salah, Sadio Mane and Virgil van Dijk also being chosen.

Things were very different when we asked about potential card-getters, with each of our experts choosing a different bad boy and five of them choosing a Los Blancos player. I have included my selection, Casemiro, in this Bet Builder but Eder Militao, Eduardo Camavinga, Nacho, Dani Carvajal, Fabinho and Jordan Henderson are all worth considering, too.

Each of Real Madrid’s last five Champions League games have gone over 2.5 goals and with 22 goals scored in this period I am definitely backing the overs on Saturday. At least one of those goals should go to Karim Benzema, scorer of 44 goals for Los Blancos this season, 15 of which have come in the Champions League. The veteran striker has netted 20 of these in his last 16 outings and looks destined for the net in the final.

Casemiro is hard to ignore in the cards market. The midfield destroyer somehow avoided a booking against Manchester City but he has still been carded 16 times this season and has committed a club-leading 71 fouls across La Liga and the Champions League.

Given Real Madrid’s ability to claw their way back into games it’s hard to imagine this one seeing fewer than three goals. The fact that Real have struggled to contain both Man City and Chelsea suggests that Liverpool should run riot, with their threat at set pieces the focus for me in this one. Virgil van Dijk’s threat from corners makes him a brilliant anytime scorer option.

Finally, Fabinho has been the man to break up play in Liverpool’s biggest games this term. He’s recently been carded in two clashes with Man City and an encounter with Tottenham. The Brazilian has eight bookings to his name this term so back him for a card.

Both of Real Madrid’s two-legged ties with Chelsea and Manchester City were littered with goals and I expect the entertainment to continue in this final with Liverpool, so will be taking over 2.5 goals.

Karim Benzema has netted 15 times in 11 Champions League starts this season and Real’s penalty-taker will be keen to put on a show in his home country at the Stade de France. As for a yellow card, look no further than Eder Militao. Real’s Brazilian centre-back has four yellows from his 11 appearances in the competition and has committed 15 fouls.

Given Real Madrid’s defensive weaknesses they will have to try and outscore Liverpool and over 2.5 goals is fancied as a result. The Reds themselves have scored two or more goals in 11 of their 12 Champions League ties this season and it’s unlikely they’ll try to shut up shop now.

One of Real’s key areas of weakness is central defence, Los Blancos haven’t replaced Sergio Ramos or Raphael Varane and Jurgen Klopp’s side can exploit the space often left between their centre halves. Sadio Mane has been remodelled as a number nine and could be the player to make the difference for Liverpool.

Throughout their Champions League run Carlo Ancelotti has placed plenty of responsibility on the shoulders of young midfielder Eduoardo Camavinga. The Frenchman has been booked eight times in 12 starts in the league and looks a prime candidate to fall foul of the referee in this final.

Major finals are often cagey affairs but there were 11 goals in Real Madrid’s two-legged semi-final clash with Manchester City and the Champions League final with Liverpool looks likely to feature over 2.5 goals.

In terms of a goalscorer bet, the boring but obvious answer is Karim Benzema, without whom Real Madrid would not be in the final. Benzema has netted 15 times in the Champions League this season and can cause problems for the Reds. But Madrid will also have their hands full at the back and Nacho, who is a regular starter with Eder Militao, could consequently go into the book. He has picked up yellows against Cadiz and Atletico Madrid recently.

Liverpool and Real Madrid have netted a combined 58 goals during this season’s Champions League, leaving them as the second and fourth highest scorers respectively, so I’m happy to take over 2.5 goals.

There will be plenty of attacking talent on show in the final but it’s hard to ignore France international Karim Benzema, who has scored 15 times and leads the Golden Boot standings. The Madrid star has been the spearhead for his side this season and it would be no surprise to see him net again.

Rounding off with a card candidate and you don’t have to look any further than Los Blancos defender Dani Carvajal, who has been shown three yellows and committed six fouls in the tournament. The Spaniard is not shy when sticking his foot in and, given the fact he will have Sadio Mane, Luis Diaz and Mohamed Salah potentially running at him, there is every chance he will find himself in the referee’s notebook.

Very unusually for a modern-day player, Salah revealed after Liverpool’s semi-final win over Villarreal that he wanted to play Real Madrid in the final. The Egyptian has painful memories of the 2018 final, when he was forced off after just 30 minutes after a challenge from Sergio Ramos. Salah goes into this game fresh, after fitness concerns, and will be intent on making his mark in Paris.

With Fabinho and Tiago looking likely to miss the final, Henderson is likely to be given the task of breaking up play in the middle of the park. The Reds skipper has already picked up two yellows en-route to Paris and there is every chance he’ll receive another in the final.

Since the group stages, Liverpool’s European ties have seen 20 goals scored whilst there have been 25 goals in Real Madrid’s knockout stage matches. The Reds have failed to keep a clean sheet in their last four Premier League games.