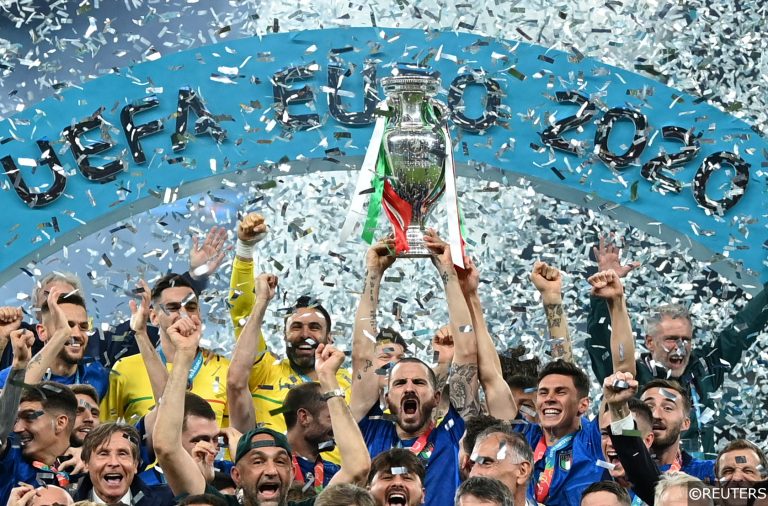 After another hectic weekend of Premier League action we’re launched into the international break for a brief respite from the frantic club schedule.

While much of our attention will be on England’s ongoing World Cup qualifying campaign there is also the small matter of the UEFA Nations League to look forward to.

France, Belgium, Italy and Spain enter the final stages of the Nations League with hopes of becoming the second team to lift the trophy.

We’ve been in touch with seven experts from across the industry to shed some light on who you should back this week!

Italy have home advantage here, are on a world record unbeaten run and have conceded just five times in their last 17 competitive matches. They should be favourites, despite the talent in the other three squads. Of the other three, France are in poor form, Spain’s squad is in transition and questions over Roberto Martinez’s future loom large over Belgium.

Italy have proven their ability in one off competitive matches and can get their second piece of silverware for the year here.

I’m finding it hard to look beyond Italy. The Euro 2020 champions are unbeaten since September 2018 – a ridiculous 37 games – and have the added bonus of home advantage this week.

They beat both Belgium and Spain on their way to Wembley over the summer, all while Nations League favourites France were heading on their holidays after their shock round of 16 elimination. I’m backing Roberto Mancini’s men to make it a 2021 double.

It is a little bit of a surprise Italy aren’t favourites given their Euro 2020 success as well as home advantage, not to mention their unbeaten run, and they are tempting at the prices.

However, they have been held by both Bulgaria and Switzerland since their Wembley success and although none of the four teams have excelled post-Euros, Spain could surprise as the outsiders.

La Roja have lost only two of their last 15 matches against Italy inside 120 minutes, and although they went down on penalties when it mattered last time out, they played the Azzurri off the park and should have won with something in hand.

France never really got going at the European Championship and have since been held by Bosnia and Ukraine in their World Cup qualifying campaign and there is value to be had elsewhere in the Nations League outright betting.

Euro 2020 winners Italy will rightly be the pick for many but Spain ran Roberto Mancini’s men close in the competition’s semi-finals and the likes of Pau Torres, Mikel Oyarzabal and Dani Olmo were part of the team who claimed silver at the Olympics football earlier this summer. They are an evolving group with plenty of potential and they could make their mark by going all the way.

The market tells you that there’s little to choose between the four semi-finalists but at the prices I’d side with Spain. France have the talent, but they were disappointing at the Euros and they haven’t been particularly impressive in three World Cup qualifiers since.

The Spanish have a nice blend of youth and experience with stalwarts Jordi Alba and Sergi Busquets complimented by the enthusiasm of Pedri, Ferran Torres and Dani Olmo and they could come out on top.

All four remaining teams have what it takes to go all the way in the competition, but Belgium look a tasty price under Roberto Martinez.

France’s form is a worry even though they have the best squad on paper, while Italy have lost Ciro Immobile through injury. Spain might play good football, but they struggled in the final third at the European Championships. Belgium have only lost to England and Italy since 2019, and Romelu Lukaku can steer them to glory this autumn.

France had the worst summer of any of the four semi-finalists, but don’t let their early Euros exit put you off them. The world champions still have a ridiculously talented squad, while their semi-final against a Belgian side who can never seem to go all the way looks winnable.

As we saw in the summer, there’s little between Italy and Spain. However, I’m not sure I’d back either of them to stop this French side, especially as Didier Deschamps’ men returned to winning ways last month.

The Long Haul: Best bets for this week plus 31/1 acca