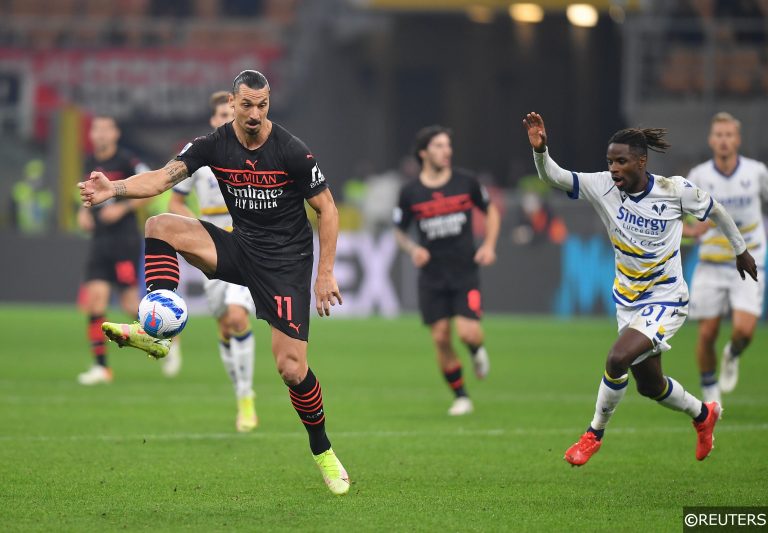 With the Champions League back for matchday three we’re keeping it simple this week, with our experts tasked with finding their bet of the round.

The seven have certainly delivered, with the combined selections totalling up to a 532/1 accumulator! You can back that below, while read on to see each selection.

In The Mixer Champions League Accumulator

AC Milan have spurned leads against both Liverpool and Atletico Madrid but should have no problems getting off the mark away at Porto on Tuesday.

The Rossoneri were unlucky in both of their previous Group B outings but look to have too much quality for a Porto side who after opening with a stalemate away at Atleti, were shambolic in their 5-1 defeat to Liverpool.

Sergio Conceicao’s side will try and frustrate their Italian visitors but lack genuine cutting edge at the top level. The same cannot be said for Milan, who, despite missing a few big names, have the quality to claim all three points at the Estadio do Dragao.

It’s hard to forget Sheriff Tiraspol’s heroics in the Bernabeu in matchday two, but it feels like the bookies have. They’ve made the Moldovan side 35/1 outsiders in San Siro, which is tempting after their win in Madrid.

However, I’m backing Sheriff with a +2 handicap which is available at 6/4. Inter Milan have a terrible Champions League record since returning to the competition, while they’ve won only two of their last 20 games in Europe’s top tournament by more than one goal. Sheriff have won two from two while Inter are yet to score a goal in Europe. Back the underdogs to keep this one close.

Borussia Dortmund are the underdogs ahead of their trip to Ajax on Tuesday but the German side may well be able to claim the spoils. BVB warmed up for this assignment with a 3-1 Mainz over the weekend and managed a 2-1 win at Besiktas in their last away game in Europe.

Admittedly, Ajax have been in devastating form in this competition themselves with a 5-1 win at Sporting Lisbon and then a 2-0 win over Besiktas in Amsterdam, but Dortmund are a step up in class and with Erling Haaland in fine scoring form (he has 13 goals in his last eight games) they can outgun their hosts.

There’s also a great chance we’ll see goals at both ends as both teams have scored in six of Dortmund’s last seven wins so the 7/2 on an away win with BTTS is my standout bet here.

I’m quite keen on over 2.5 goals at a shade of odds-on when Young Boys host Villarreal on Wednesday. The Swiss side showed their capabilities on home soil when getting the better of Manchester United 2-1 in their Group F opener and they are dangerous on the counter attack.

Villarreal are not at their best on the road, having failed to win in seven away games, but last season’s Europa League victors do boast plenty of firepower. The Yellow Submarine have drawn 2-2 with Atalanta and were unfortunate in a 2-1 defeat to Manchester United at Old Trafford. Another entertaining encounter looks likely, with the goals the way to go in Bern.

Young Boys play host to Villarreal in Group F of the Champions League on Wednesday and I find it difficult to look past the 9/4 on offer for the Swiss side to claim the spoils.

David Wagner’s men defeated Manchester United 2-1 on home soil in Week 1, making it five home Champions League wins in a row, while they haven’t tasted defeat at the Wankdorf Stadium in their last eight matches in Europe’s top competition.

Throw in Villarreal’s abysmal away record, which has seen them lose their last seven Champions League games on the road, and Young Boys look a cracking price to collect all three points.

Juventus look a little on the short side when they travel to St Petersburg to take on Zenit. Sergei Semak’s side are strong on their own patch and they showed that when hammering Malmo 4-0 last time out in the Champions League. The Russians also performed with credit when losing 1-0 to Chelsea at Stamford Bridge in their competition opener.

Juventus have won five matches on the bounce, but all of those victories have come via a single-goal margin and their performances haven’t been as impressive as that winning run suggests. Juve were extremely fortunate to beat Chelsea in this competition and the same can be said for their 1-0 win over Roma at the weekend.

At the prices it could pay to back Zenit to upset the Old Lady.

Lille are a long way off the side they were when winning Ligue 1 this season, currently lingering in mid-table obscurity in France’s top flight, and their Champions League campaign has not been much more convincing.

The French outfit have so far drawn 0-0 with Wolfsburg, who were down to ten men for the final third of the contest, and lost to Salzburg and they are worth opposing against Sevilla.

Sevilla have drawn their opening two group fixtures but have also made a solid start in La Liga this season, putting themselves on the fringes of the European places, and they could be a great bet to win at the Stade Pierre-Mauroy.